I've got 9 miles of the Wye to choose from but when I have, for whatever reason, my heart set on just one swim, its uncanny how often the only other angler for miles is sat right where I want to be. This happens way too often for it to be anything other than a massive conspiracy probably backed by the KGB, CIA or KFC.

So, when I decided to fish a sheltered spot for perch I was not too surprised to see the other angler already there. He'd not faired well and, to be honest, I wasn't surprised as the water was a bit lower than I expected and it is flood water that forces fish into this area. He was about to move on to pastures new but rather than fish that swim I moved around the corner to a place where I have seen plenty of perch activity in the past. 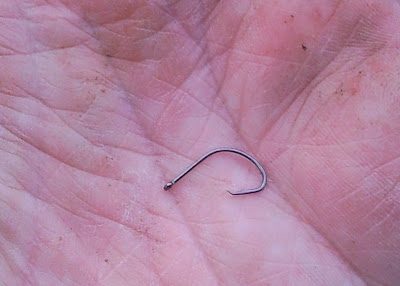 Overhanging trees and a blustery wind made my float difficult to control so I took it off and paternostered a worm on a two swan shot link. I used the float rod and set it between two rests with a mud bobbin for bite indication - all very advanced stuff ;-) The hook was a size 10 circle which is great for worms. I love circle hooks for my predator fishing and it again proved the right choice when I had a drop back bite. The fish roared off at a phenomenal speed, surfacing twenty five yards away before I could tighten the clutch. It was a trout, out of season and an unintentional catch but a magnificent fish none the less. At over 3lbs I'd love to get it in May on a fly but these old fish are as wily as you like, until they see a big fat lob worm that is. The hook was, of course, lodged in the scissors and he went back none the worse for his little adventure. 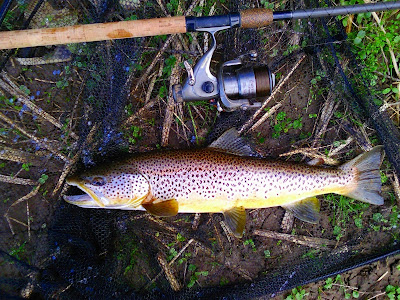 I had every intention of staying into dark but Neil, who was fishing downstream despite suffering all week with a virus, faded somewhat so we packed up early. Not to worry, there's rain on the way and next week I'll be back for another go - lone swim pinchers permitting.
Posted by Dave Burr at 19:08