I don't like to visit the swims that have been producing for the hotel guests, some cross over is inevitable but I have no interest in chasing anybody else's fish and prefer to find my own in any case. This is not usually that hard to do and I have little favourite spots that few others find let alone fish. So, my quandary is that the fish are proving extremely reluctant to play ball due to, I believe, their numbers being considerably down for some reason and the extreme low river with high temperatures. In short - I can't buy a bite.

I'm working on it though - hard. I had a walk around the fishery, travelling light and looking for fish in all those summer haunts where you can normally spot a fin or two - nothing. I saw a chub eat a pellet in one swim but just one and elsewhere a chub sat under a bush until it spotted me spotting it and it was gone. Not a barbel anywhere. Exhausted and despondent I left.

Fish into dark! I declared to Neil and he joined me and a mate (Pete) who's staying at the pub for an evening assault. I had chosen my spot beforehand but Pete had fished it earlier in the day and wanted to return. 'Fine' I declared, you'll catch there this evening - and he did, two barbel.

Neil and I sat either side of a large bush and fished a noted evening swim. There was much surface activity as the light faded to a backdrop of the chattering call of the sedge warblers. I had a nod on my left rod which I lifted but nothing was there although, at that moment, the downstream rod heaved to a mighty line bite. I was puzzled and wondered what would have caused it, my doubts were later confirmed.

The river died, it all just went 'quiet' at a time you would expect activity. The peace was shattered by a loud Kersploosh! and a volley of Anglo Saxon from Neil as he threw a rock at a dog otter that had the audacity to sit and stare at him having ruined our chances for the evening.

Ah well, back to the drawing board. The evening did have a spectacular sunset though. Earlier the sun had one of those 'Sun Dogs' beside it in the form of a small vertical rainbow. I spent some time playing with the settings on my compact and took a number of shots then, as the sun dipped, there was a spectacular sunset. Little cameras never do sunsets justice so I put my polaroid glassed infront of the lens and got the desired affect, hope you like it. 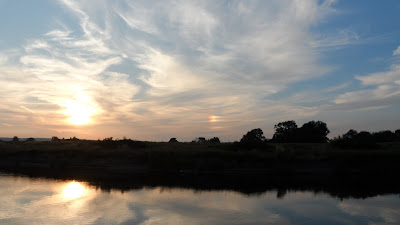 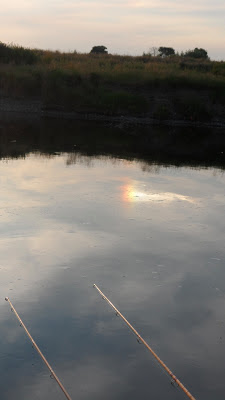 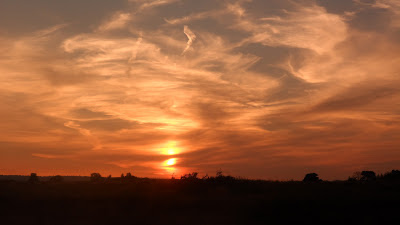 Next day I was out again, this time to a spot that always produces and, by the chest high nettles I had to clear, was as yet unfished. Despite staying into dark and becoming encircled by a mighty army of sticky slugs, not a twitch to my line was registered. 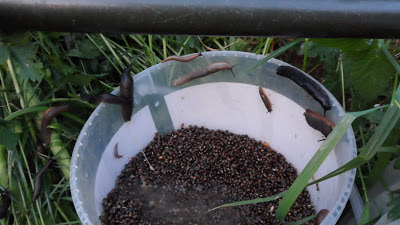 I am now officially in crisis. I'm away for a couple of days and will return refreshed and ready for another assault but the river is making life very difficult - well, it is for me anyway.