A change of pace last evening. Instead of the flowing Wye I spent a couple of hours float fishing on my local carp pool.
When I got there I met the resident carp angler. He rolled up in his Transit about a month ago, set up his bivvies (note plural), plus his toilet tent, TV aerial etc. He's been fishing solidly since apart from a weekly return to Brum to scrape the dirt off and pay the bills. He has caught just 12 carp in that time and I quote, "I think they've wised up to me now". Yet, he seems to have no intention of moving swims! He also said that he would stay there "until the weather got cold". Bloody hell! Is it worth it I ask myself? Living next to the water and waiting for a fish to get so bored with life that it gives itself up. 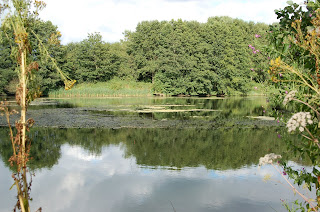 I decided to ignore the carp. The lake is so weedy it would be difficult to bring a fish in without really cramming the pressure on and I gave up my last syndicate because of the number of parrot nosed carp in there. No, I was fishing for roach and rudd (as it turned out) and had a lovely time doing it.
Its funny, when I was a young 'un, I used to fish with the lightest float I could get away with, this was the way it was done back then - sensitivity was everything. Now I use the heaviest float I can get away with and, of course, correctly shotted they are still ultra sensitive. Another factor is the size of the float as my eyes are no longer up to looking at something the size of a match head at twenty yards. To be honest, I could have use a pike bung, those fish just tore off with the bait as soon as it hit the water. Rudd after rudd, along with a few hybrids, came seconds after each cast. I played with the shotting and got the bait to sink through them. Whenever the bait reached its position just off bottom, the bite would take a little longer to come but would usually come from a roach, although a few perch put in an appearance as well. 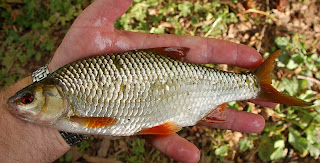 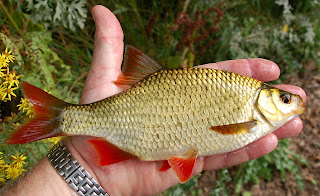 I don't know how many fish I caught, it doesn't matter. None of them was big, up to about 10 or 12 ounces I suppose but a very pleasant way to spend an evening. It does however show that when I choose to try for the bigger roach that inhabit here, I will have to think hard about tactics so that I can avoid the hoards of rudd and also the inevitable carp which would cause havoc on light gear. Hmmm? I'll work on that one.
Posted by Dave Burr at 12:23