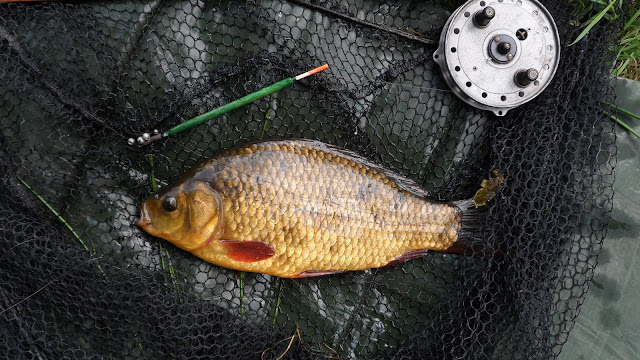 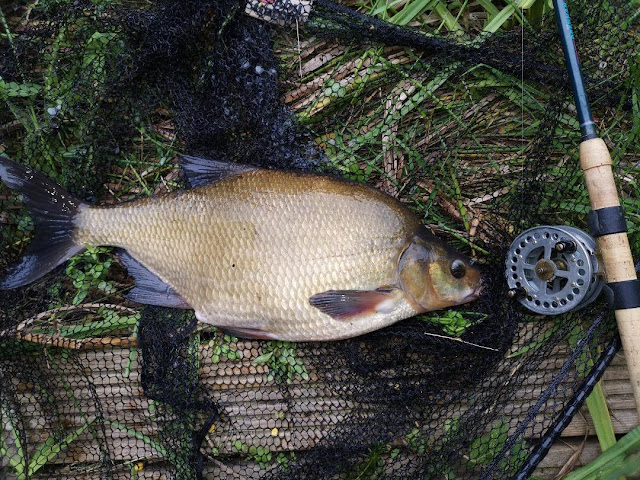 When  I was but a lad I was taken, along with my brother and sister, to some hills just off the A303 on the Somerset/Wiltshire boarder. It was sandy ground, short grass and lots of butterflies but the foliage caught our attention. My sister found a four leaf clover. 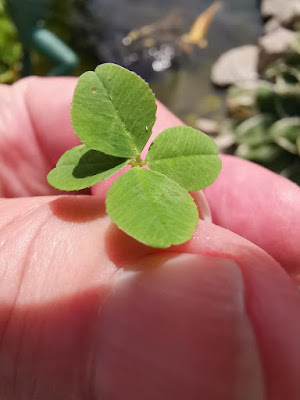 We scoured the area and soon a mutant patch gave up many of it's oddities. We ended with a haul of a genuine two leafer, lots of fours, a couple of fives I think a six but not a seven although we peaked with an eight leaf clover. None of us have ever seen the like since.

However, I have always kept my eye in and seem to find more than my share of FLC's. It's a knack, as you walk and look down you just have an idea of 'four' in you head and they pop out of the three's waving at you. Have I enjoyed unbridled luck and success as a result? Have I buggery.

One of my earliest fours when I was 12 or 13, was mounted between Sellotape and consigned to my fishing bag. Surely now my trips to the Yeo would be fruitful. Nope, I had a run of blanks and an incident where my trotted bread was heading for a mighty trout well in excess of two pounds. It moved to intercept my offering, I tensed, readying myself when the ground shook. I suspected a minor earth tremor but no, a herd of steers ran full pelt down the bank and into their drinking spot - which happened to contain my trout. The fish left, the air turned blue and a young boy went home disappointed. The clover did not join me again.

Of course, this is not a hard and fast rule, if fortune depended on the random collection of mutated foliage we'd all be scouring the fields and hedgerows for a talisman to avoid life's drudgery but the consistency of the curse of the clover is baffling.

A week or so ago I joined my son and grandson for a three generation fishing day at a local pool. Jake caught two small carp quickly then got a little bored, as kids do. I'd had a couple of fish too so joined Jake for an adventure walk, warning him that clearings in the woods meant child eating monsters abound - knowing full well there was one up ahead. He's eleven now so my scare story and a few guttural noises and branch shakes failed to have the desired effect. We walked on through a long meadow and skirted the long way back to the fishing spot so that Neil could have a few minutes of rest from the constant questions and demands...... from Jake, not me. 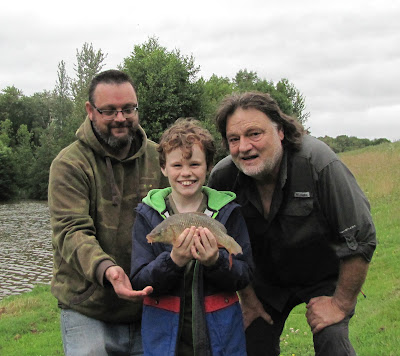 In the field I found a four leaf clover, one of those big clovers which apparently, produce more four's than some other varieties, or are  they just easier to spot??? Back at base we showed off our find. It was then that Jake realised he'd lost his little plastic Kinder Egg toy somewhere on the trek. His belief in FLC luck instantly tainted. Jake has a few 'issues', Neil likens their home schooling sessions as being akin to herding wasps, hence giving up a 'treasured' toy he'd got that afternoon and had yet to play with, didn't sit right and a tantrum ensued. I could feel Neil's stress level rising so I set off with the boy as we back-tracked though dense undergrowth and long grass. We failed to find his toy but I did find another FLC.

On our second return to the swim, Neil had been in a right state as two rods had gone off together and the resultant carnage was one landed but two rods tangled beyond use. I gave him the clover and he hooked immediately into a better fish on the last rod out - then lost it.

Relating this to my wife she was thrilled by the finding of FLC's as she's never managed it. Next walk with the dog and I found yet another and picked it for her. That was last weekend and since then nothing has gone right. My new bivvy turned up, I set it up in the garden and a pole snapped as I was connecting the tension strap. Nicky had some T shirts arrive from the USA that had been subject to an excess import levy. None of them fitted as US Large, I later found on their all but hidden sizing chart, equates to an adult Asian woman the size of a twelve year old girl. Then today, her long awaited bird bath turned up but was the wrong one. Can you spot a pattern? 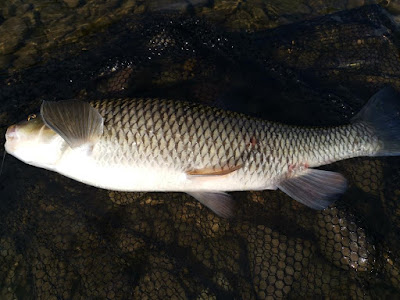 I went to the river last evening. I have been chubbed out every time I go so chose a spot that has produced some bigger ones and hoped to exploit my magnetic attraction to them. As I took my already made up rods from the car - ow! A size 10 micro barb curved shank hook sank deep into my thumb. The reel from rod two was entangled with the reel on the rod I was attached to. What made life harder was that it was in my right hand so my manoeuvring was all done cack-handedly. Eventually I had my tackle bag open and some pliers in my hand. It hurt....quite a lot so I opted for pushing the point through and snipping it off. That hurt considerably more so I tried the ghillie method and put a loop around the hook to pull it out from the direction it had gone it. I think I was missing one item, the ghillie as I couldn't get it right without way too much discomfort. 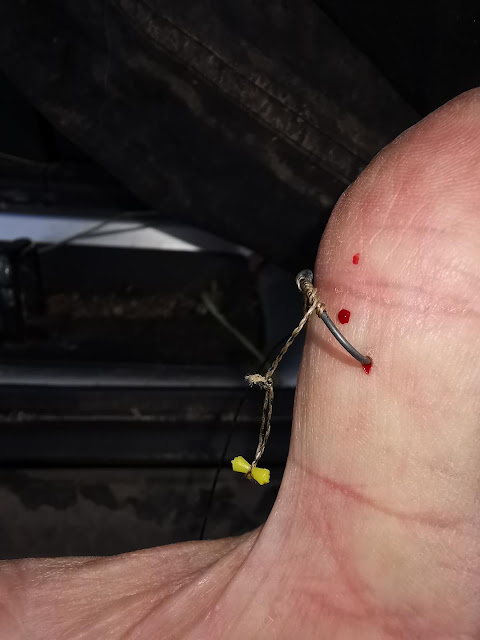 Last option - grab the hook with pliers and give it the ol' heave ho. Surprisingly it didn't bleed much.

I fished till dusk using the method that had worked so well in the past. I had two chub, the biggest about a pound. I drove home and flushed the FLC down the toilet and have vowed never to pick another.

I hope that my fortunes turn and I have something of note to report soon.


As a PS, whilst preparing this blog the heating boiler failed. The FLC is a curse that knows no end....

you have been warned.