The magpies woke me as they do every day. It was my intention to make this my alarm clock and to rise early but my wife flicked the curtain and they flew off, silence returned and I went back to sleep. Much later I was on the road and eventually I reached the lake. The long walk to my intended swim was no longer necessary as I now have a key to the fishery gate and could drive around it - rejoice! For once I arrived fresh and raring to go. 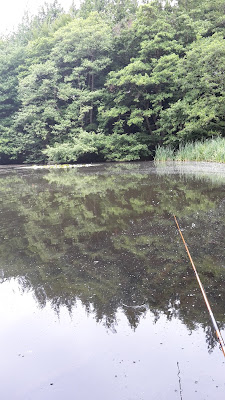 The bay is shallow and silty, it is a place where any activity from a feeding fish to a float landing causes bubbles. Last time here it was a veritable Jacuzzi but today not a one. Typical as I was hoping for a tench. Never mind, out went a little groundbait containing hemp and corn followed by an over depth float with a few grains on a size 10. I sat back full of expectation and trying to recall the last time I tench fished in June - it's been a while.

Less than fifteen minutes had passed when my beautiful 'Sussex Micky' goose quill stood up by several inches. I lifted my Chapman 500 and tightened into the fish. The water humped and the fish - a carp - ran full tilt into the nearby weed bed. As soon as it hit the weeds so the 5lb hooklink parted. The tight line had ejected all of the split shot from the line and the float sat amidst the resultant foam, too far for me to rescue. Sorry Micky but it died a warrior.

Plan B. Back to the car and a heavier rod was selected along with a fixed spool that had carp proof line on the spool. I re-rigged a float and tried again. Of course, the next bite produced a roach of about three ounces. I cast again and caught an overhead alder tree. I bloody hate alders. Sure they look nice but every line that finds one becomes irretrievably entwined and I had to set up the full end tackle yet again. But then, I was fishing like a plonker. 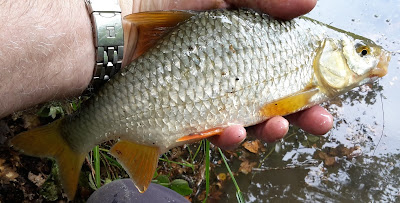 A nice roach followed and a few patches of bubbles indicated that some tench were in the bay and on the mooch. I got my float where I wanted it and sat back determined to sit it out until a tench found my bait. Time passed and I was beginning to think my luck was out. Then I remembered the red worms that my lovely lady had collected for me from the compost yesterday evening - bless her. I impaled two on the hook. The smell of red worms on my fingers brought back images of a similar lake from my youth especially a trip spent in a similar bay full of dead twigs and leaves where three of us youngsters all fishing worms from granddad's compost heap and scoured in moss, hooked - and lost - four small pike in a short period of time. It was particularly relevant as locals felt that no pike had survived the big freeze of '63 in fact my grand father refused to believe my story but, for three lads not used to feeling anything very lively on the line, it was an exciting day.

Shrugging off my bout of nostalgia I cast and put the rod on a rest. This is where it get's weird. Due to the overhanging bushes and trees I was stood in the margins - and needed to pee. Thinking nothing of it I removed the ol' toggle and two and began my leak. Diverting from job in hand I looked up and saw my float bury! I grabbed the rod but was well aware that I was beyond the point of no return - so I multi tasked. Avoiding unnecessary wetness I played and landed a beautiful summer tench to the accompanying trickle of a tiny waterfall. There's always something new to accomplish in fishing but I'm not sure I'll be in a hurry to repeat my actions on the river bank especially when an armada of canoes is passing. 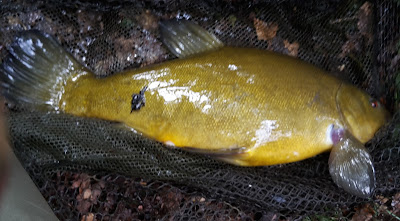 I digress, it was the first time I've targeted tench on the lake as the carp are rather distracting but I enjoyed catching this fish as much as anything I've landed in a long while.
The fish photographed (badly), on my mobile and I recast. But the mood of the bay had changed. I gave it a while longer enjoying the scenery and bird song whilst revelling in a touch more nostalgia. Then it was time to shake a leg and go home. 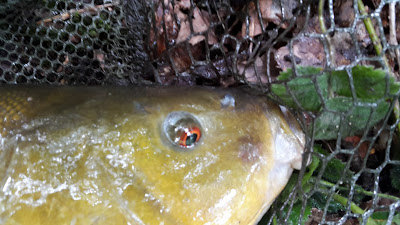 A month has passed between fishing trips. A month - at this time of year! I do have an excuse in that I had to do domestic things like ripping out a kitchen and tearing up old floor tiles, all followed by umpteen trips to the dump with the debris. Plus I had to do a spot of work on the fishery of course. I ended up needing a holiday. Which is exactly what we did. Whilst plasterers, electricians and kitchen fitters created a mushroom cloud of dust which spread evenly about our property, Nicky and I got as far away as possible and made our first proper visit to Scotland. 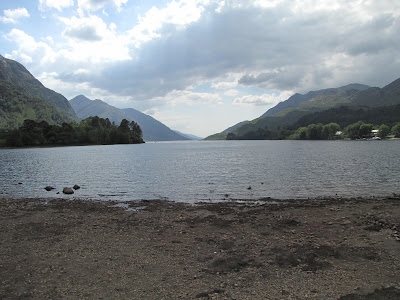 I'm certain you don't want to hear all my holybob anecdotes and the amount of haggis I managed to consume but I have to say that if you've ever considered a trip to west Scotland - take it. Time and time again we stopped our car to have a look at a view or try to identify a bird and were stunned at the silence. Genuine quiet apart from the sounds created by nature. No cars, people, distant motorways or even a tractor - just quiet. On the Island of Mull it was like it pretty much everywhere and I loved it. I get the impression that some people have never experienced silence and they become unnerved when there is no background hum. This is certainly the case when they get in a canoe and cruise down the river Wye and there is much whooping, hollering and bad singing, they are not just showing off they are overcoming an uneasy fear. The idiots.

Anyway, ten eagle sightings (mainly golden but white tailed fish eagles too), hen harrier, corncrake, grey seals, dolphin and porpoise, all but one eagle in one day. Yes, we'll be back.


But the lake was calling and when I returned and I was eager to spend a few days at its side. Neil had blagged a couple days off work and so we could spend some quality time together. Having splashed through the mud I was on firm ground and looking for a swim. The weed is thicker than ever I've seen it but I've pulled carp through it before and figured I'd do it again so I opted to fish a clear run beyond some of the beds. Neil slithered up the track and was disappointed to find a spring overflowing into the spot he'd fancied so he took a comfy spot with a good track record. We were soon set up and fishing. 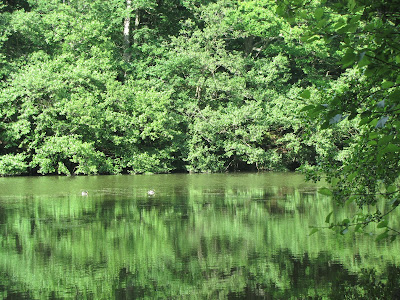 Just two hours later I had a belting run and tightened into a heavy weight. It soon left the clear water and went headlong into the weed. I kept my cane rod high and applied continuous pressure, steady and constant is the way to go. It moved.... slowly but then all became solid. I did the seesaw trick to no effect and then loosened up to see if the fish might free itself. I was unable to give slack line as the fish was already heading out of the weed so I crammed it on again. It took about ten minutes just to get it through fifteen yards of weed bed but it was now in open water and it had plenty of fight left. Neil was at my side offering good advice and commenting on the strength of this big fish. The net was sunk and it had rolled a few times showing some big scales down its back. A lump of weed was hanging off the lead and it created a fulcrum point. I noticed it but had yet to react when the fish twisted and was gone.

"Ah well, can't win 'em all" I shrugged and Neil just said "Don't call me until the fish is in the net next time", smiled and left me to shake off the disappointment. It had come so early in the session I didn't really mind too much and was soon fishing again.

Another lost fish soon after hooking it at midnight made the gremlin thoughts swirl in my head but I dragged myself on a stalking walk in the morning to try and find feeding fish or two. I found only tench fizzing away in a bay but had no appropriate gear. I made the annual promise to myself that I would target them one day and lobbed a pva bag and boilie through a gap in some bushes.

About forty five minutes later I was crashing through the undergrowth to stand in the margins and 'play' a fish that thought it was a skimmer. I didn't mind, having lost a couple I was glad to land an easy one. It was just over eighteen pounds and despite being just over half the size of the first one I lost, I was glad to have landed it.

During the evening and in my home pitch, I had another fish that came through a lighter weeded channel and was in the net without anything more than a spot of heave ho. It was a 'mere' thirteen pounds but had somehow lost a pelvic fin during it's life. It was a tatty wound and I suspect an otter was responsible as opposed to a braid cut or whatever. But it was nice to see some fresh fish coming through, I was actually glad not to have caught big twenties or a low thirty as I'd hate to think it is too easy. I did however, get into a mighty pickle (to use my wife's favourite term for a fuck up). I bit through my leader before taking the fish from the net but, when I reached the unhooking mat, found line still in the net - so I bit it again. Once returned I found that I'd caught my second line and that was one of the one's bitten through yet I had still managed to retrieve that rig into the margins before the tangle of the two lines let it go. I hand lined it out but, due to some incredible knots well up the line, I now had two reels that needed respooling for me to have a chance of reaching the baited spot.

It was late, dark and it all seemed like a lot of fuss and nonsense so I leaned the rods against a bush and sat with Neil drinking his beer and enjoying the sounds of the night. I slept well not waiting for a bite. the dawn chorus was incredible and the journey home filled with a yearning to return.