My urge to capture an early Spring carp was gathering pace and intensity. I'd had a day doing a fairly long chuck (for me), with my twelve footers and big reels when Neil caught his common. It all felt cumbersome and heavy. I know that my cane rods are not what you'd call featherweight but at nine to ten feet in length, they feel balanced and somehow 'right'. I've always favoured eleven foot rods for barbel and have never bought into the need for longer so to wield those beasties about again was not for me.

Of course, my dodgy shoulders have a say in which rods I can and cannot use and I have come to the conclusion that light is sensible for the time being. So I bought a couple of Free Spirit, ten foot carp rods. Quite capable of lobbing 80+ yards but also nice and neat for margin work. I dug out a pair of old Daiwa Regals and was ready to go. Ready that is once I'd sorted my rear rod rests out. My last bite saw me lifting the rod and pod together and by the time I'd untangled one from the other, the fish had gone. Another thirty four quid was spent on a system that allows you to fix your rod in the event of a brutal take yet remove the rod by simply lifting the rest from a recess. Rock Steady Back Rests by Bank Bug if you find yourself so inclined. Just the job.

Duly armed and inspired I looked at the weather and figured it was worth another go. I'd even visited the lake mid week and baited a spot (told you I was keen) and was now casting close to an overhanging tree. I sat back and waited. Eventually Neil arrived and wandered off to drop into a margin swim that was a bit too adventurous for me.

You know those days when you set out full of optimism only for it to disappear within minutes of casting out? That's how it was on this trip. The wind was wrong, the sun stayed behind a grey curtain and it felt dead. I was too far from the action area and no fish was going to come to me and my bait. I should have upped sticks and gone for a walk to fish along from Neil but it just felt like too much effort. I packed and left. Neil hooked a fish but lost it.

Today was different. The sun shone and I just knew that some carp would be on the fin. The roads were frustrating and the dog was sick - again - but I was soon bouncing along the farm track. I didn't recognise the van that betrayed that someone else was fishing but, unconcerned, I headed to the windward end as the freshening breeze was starting to chop the surface,

I had to walk a distance to the swim due to the muddy track and then back around the bay to feed my chosen spots. I was glad to slump in my chair and relax. I just knew a bite was due.

About an hour later (12.30) and the alarm shrieked as a fish tore off. The rod came away with a gentle lift and the short rod bent firmly into the running fish which bore deep and long toward some sunken trees. I dropped the rod tip and gave it some stick. Eventually, the fish yielded and kited off away from me. It fought long and hard, giving more long runs when close in. A great performance and an enjoyable christening for the rods.  Eventually I slipped a lovely orange mirror into the net. Relief! It went 23.14 and I felt a weight lift from my shoulders. 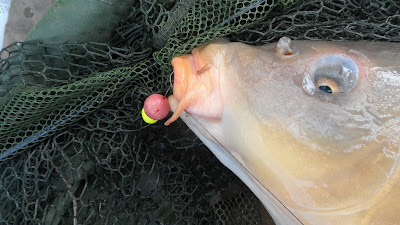 Having slipped it back, cooked a cheese toastie and messing up the crossword, I became aware of much banging and revving of an engine. This went on for a while so I reeled the rods in and drove around to the chap in the blue van. He was stuck fast in slippery clay and all his efforts, including a small winch, had failed miserably. My 4x4 Honda soon had him out and my grip strips (plastic plates for just such an emergency), saw him able to three point turn and face the gate again. We had a long chat during which time the wind dropped. I returned to my pitch, packed and headed home - content. 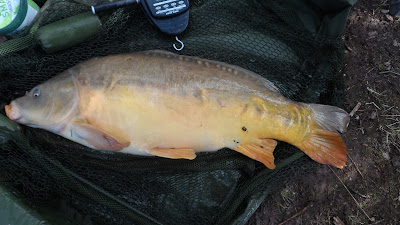 The Year So Far

Is it really March already? Where does the time go? I suppose I had better tell you all about my fishing over the winter period.

December saw me trotting the river Wye..... for about an hour and a half or until my arm gave out. That was a blank then.

A few days later and with the river still low and cold, I decided to use up the rest of  maggots with a spot of feeder fishing in one of my favourite winter chub holes.  Twenty minutes in I spotted a disturbance amongst the trees to my side. That'll be a swan, I said to myself and readied for the hissing and snooty stare of our most short tempered bird. I was wrong. A bloody otter rolled not three yards from me and steadily paddled across to the far bank where it hunted either oblivious or nonchalant to my presence. Knowing the effect that an otter tends to have on a swim, my heart sank. But it had only grazed the upper end of my bit of water, I'll stick it out. And I did, for ten minutes. That was when it's cub edged close and stayed under the near bank whistling loudly. This set my dog into a tizzy and the mother into a fast swim back across and back into my swim. The two of them slowly left upstream and my chances of a fish went with them.


It was mild so I sat there for another half an hour or so just enjoying being there. Yes, I could have moved but I felt lazy and the fieldfares, starlings and siskins were busy in the trees, it was really very pleasant in a complete blank sort of way.

I had a fortnight in Devon in January so bird watching took over from fishing for a while. Notable species like black redstart, waxwings and a desert wheatear made it a notable stay along with a lot of sea and wading birds that were new to me and Nicky. We also stopped off in Somerset for a night as we returned. We watched hundreds of thousands of starlings coming in to roost at Ham Farm reserve, a fantastic spectacle that, for anybody with an ounce of interest in birds or wildlife, is well worth an hour freezing your nuts off. No photo's I'm afraid, I only had my phone with me. Maybe next time.

I seem to have lost interest in fishing the Wye at present. I think it's the lack of expectation that has drained my enthusiasm. I just can't get motivated to sit it out in the cold and wet when there is little chance of catching a notable fish. I know that my pb's are far from river records, but the river has been pretty iffy this last year and I have no urge to try and find a solution.

Because of this, I spent a mild February day fishing for a bite on one of the lakes on my syndicate. The main lake had people on it and although a couple of twenties and a thirty two pounder came out, I was satisfied fishing behind a float for far more modest fare. I had my bite and landed a fish between three and four pounds that was blind in one eye. Not quite a monster but fun on a light cane rod.

My next trip was with Neil and we had the big lake to ourselves. My bite didn't materialise but Neil had a mid double common. It was nice to see a proper fish. 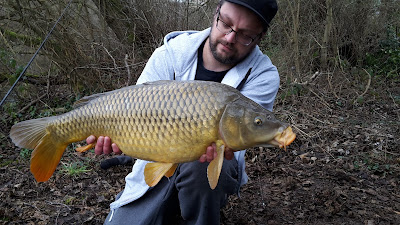 I've just returned from my third carp trip of the year. It was colder than I expected but I dressed myself to look like the Michelin man (not difficult with my belly) and put a couple of baits on a route I expected any active fish to follow. I got my bite. An absolute screamer but, on lifting the rod into it, I felt.... nothing.

There we are then, one, one-eyed fish to show for my efforts. But I shall try and improve on that over the next week or two as I'm to have a shoulder operation at the end of the month which will bring any ideas of some spring carp to a grinding halt.

Roll on the summer. 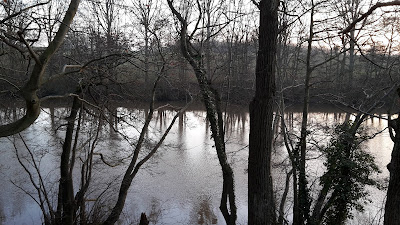