I've never been one to chase after somebody else's glory. Obviously, as a kid, if somebody gets a fish I'd be in their swim like a shot - we all did that but I like to think that I grew out of it many years ago.

There are however, many anglers that travel hundreds of miles to follow up stories or rumours of big fish taken by others. It is just part of angling in the same way that some like to compete with the man next to him in win matches. Good luck to them I just don't swing that way. Perhaps its the norm. I'm often accused or it is mentioned in my presence with an air of deep suspicion that should anybody catch a big fish from the Red Lion stretch then I'd be in their swim like a shot as soon as they leave. Nothing could be further from the truth.

I fish the river in search of barbel just like anybody else but I gain much more satisfaction from finding a modest fish with an unblemished mouth than from a much larger fish with umpteen previous hook marks in its face. Such captures are inevitable but I do not embrace them. For me, knowing the swim where a big girl was caught means I can avoid it in order that the fish, if its a resident fish, can have time to recover. I will note the time and conditions of the capture and maybe use them in a future session or season.

We have certain 'goer' swims and big fish swims on the river that get hammered on an almost daily basis. When I find such a swim empty I am more likely to walk on by to allow it a rest than to take my turn at a tired shoal of nervous fish. If you want second hand sport its your choice, I just choose to avoid it when possible.

I also dislike the vitriol and spite shown by the modern angler and the barbel angler really does take the biscuit. It is common for so called anglers to claim an enormous or even record fish then produce a photograph of a modest specimen held right out to the lens. These jokers are generally rumbled just after the Weeklies have made themselves look stupid by printing the rubbish and I have also made my feelings known in the past. But occasionally a genuine fish or at least one big enough to allow the benefit of doubt comes along and a bunch of know nothing idiots jump all over it a give the poor chap who caught it a right pasting on Faceless Book and other hidie holes for the emotionally challenged.

Just such a 'discussion' was held recently when this apparent 17.6 fish was caught from the Lower Severn... 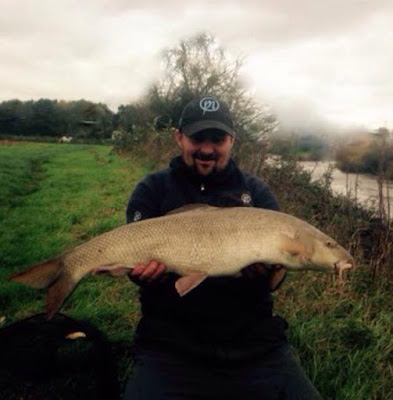 Yes, the fingers won't fit up the nostrils of the angler (the golden test) but it is undoubtably a large fish and unworthy of the hammering I am told the gentleman received. Barbel can be very difficult to estimate.

I had ended this blog with a tale reported about the fish above and an alleged incident that followed it. I decided to print it in order to hopefully throw some light onto the subject - fishing if you like - but, instead of facts I inevitably got more bile and vitriol and have been accused of cronyism by somebody who probably does not understand the term for he has a chequered past in that area. I have however, decided to remove those comments and to carry on as normal.

One point though was raised by Jeff Hatt. Jeff's a long time and respected angler and stated that were he to claim a record it would be accepted as he is known to be good to his word. He further states that one must earn their reputation with a faultless past. That's all well and good but we all know that fish do not know who's bait they are picking up and a first-time angler has almost as much chance of a biggie happening along as a long time pro. It has happened before and shall doubtless happen again. Are we then to treat such people with poisonous words just because they have not 'earned' our respect? Likewise, what of the anonymous angler? I know guys who have far more skill and angling ability than many of the self promoting, fame chasing magazine writers, what if they catch a lump?

I suppose t'was ever thus but with social media its all a bit louder than the past. Were I to catch a Wye record would I claim it? I really don't know..... which is a shame.

The last pool down the Test is a special place indeed as its also the first obstruction that salmon and sea trout encounter. This then has made it a hallowed venue for those driven by the pursuit of our spotty fish. I however, am far more inclined toward the thoughtful members of the piscine world and set off there to try and tempt a roach or two.

On the way down I stopped off  to see my old mate Dave Steuart. His first words were "Testwood! Huh, they keep all my salmon back..." There followed many, many minutes of ecological enlightenment on the art of sluicing a river.

I love Dave, 87 years young, shrinking steadily down to a scrap over five feet but as feisty and entertaining as ever. During the four hours or so I was there we chatted, went for a meal then chatted some more and I hardly got a word in. Nothing changes.

I left my grotty hotel at just after 7am and soon found the fishery. The pool at Testwood is amazing. Four main sluices create a series of swirling currents that each interact with each other, then, throw the effects of the tide into the mix and its an extremely demanding float venue. I began trotting the edge of a white water outlet which, twenty minutes later and at the top of the tide, became calmer and almost manageable, Half an hour later and its white water confusion again. No two trots were identical and loose feeding bread mash, well, I din't bother too much as it was pure guess work. 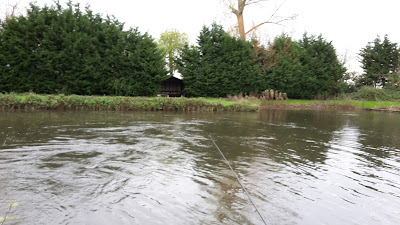 Mike Perry, who'd invited me down, was also on the float but Ian stuck to feeder fishing. His method was certainly the most 'effective' but I sit behind a lead rod most days so I stuck to the float. I was however, using a carbon rod for the first time in a couple of seasons as a whole day holding cane was never going to work with my still grumbling shoulder besides which, some of the water was very deep and, when I did give my Lucky strike a go I couldn't pick up the line quick enough to strike at distance. 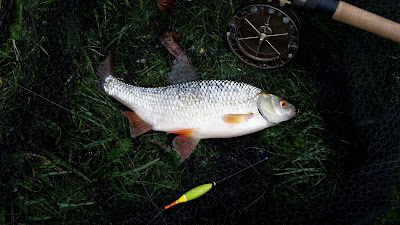 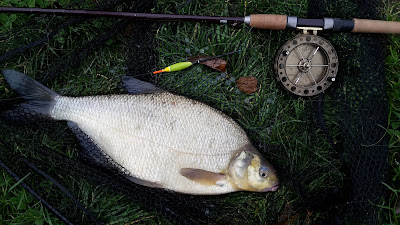 I had a nice roach of about a pound which pleased me no end but, try as I might, I couldn't find any more. Moving around I had a very hard fighting bream which was followed not five minutes later by Mike taking a similar fish from the next swim. His however, was the most spectacular looking bream I have ever seen, I'll let the pictures do the talking. These were the only bream taken all day. 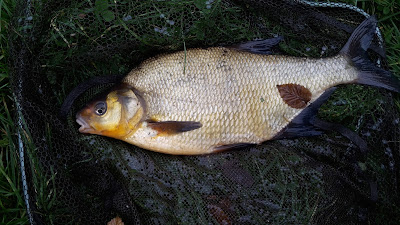 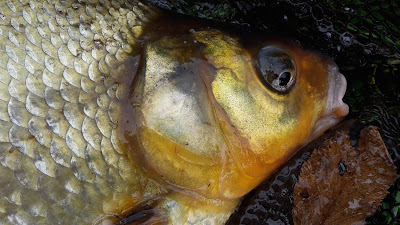 There followed brown and sea trout of between two and a half to three pounds but, after a break for lunch, the place became quiet and I failed to add to my catch.

Mike and Ian both caught many more than me but I was content as I'd had the biggest roach. I wimped out a little early and missed the dusk as I was feeling the aches and had a three hour plus drive home to come. All in all a great experience at a wonderful venue, to think there's well over a mile of the main river to fish as well but the lure of the raging weir is always going to call loudest. I shall return.