According to QI, they are known as ‘Desire Paths’. Those little tracks across fields, through woods or scrub, defined by the feet of people slavishly following the first. Unless the path is directed by a map or obviously skirts around obstacles of any sort, they are not paths of desire but of lazy minds. The mind set of the herd in much the way a sheep track weaves its way across a field or the slope of a hill in that often illogical manner. 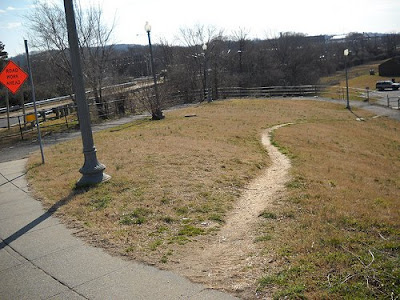 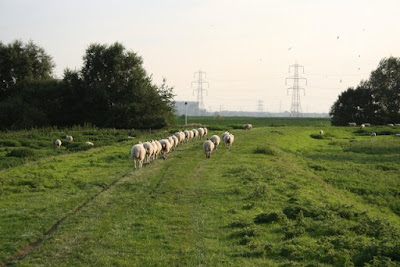 I despair at the herd mentality of many human beings though, it is a fact that there are far more sheep than shepherds. I have witnessed this many times and, as a young policeman, I would be amazed at the attitude of the great british populous at the scene of an incident. I would arrive in a Ford Escort panda car, engine and brakes smelling very hot and bothered and there before me would lie the latest trauma to hit the streets of Bristol. Crowds gather quickly in a city yet there would be a parting of the waves and an almost audible sigh of relief as all eyes would fall on little me as they in unison thought, "Thank fuck for that". They would all take a step back, I'd plough in to try and sort out the mess be it fight, fire or physical injury and the multitude would think, "Thank God we haven't got to get involved".

I guess it comes with the terrain but I soon saw this reluctance to step out of the comfort of the herd and indeed, used it to my advantage, as does every member of the emergency services. Guiding - okay, herding the public is simple if done with the right attitude. I have guided confused masses, directed belligerent mobs and herded cattle and sheep. Its all the same, you just need to adjust the size of the stick.

So it is little wonder that I like to plough my own furrow and therefore pretty obvious that I kick and buck when my way is barred. But back to the desire path. There's one along a little drove that I often take the dog through. For several years I had noticed that for no obvious reason the path diverted from the straight but took a little kink and circumnavigated a couple of small trees. I have to admit that at times of relaxed rambling I had also treaded the path of another's erratic desire but, the more I did it the more I tended to go straight instead.

I decided to experiment and last autumn, when the leaves had fallen and covered the entire floor of the drove, I took my direct path and, as I did, so I scuffed my trail through. I redid this three or four times over the next few days and left it all alone. The result is plain to see. The sheep have followed and now they are dancing to my tune. Ahh the power! Not really, it was just an experiment and come the Fall this year I shall do the reverse.

Anyway, my ramblings on foot and keyboard do have a purpose. You see, and regular readers will both roll their eyes as I mention it again, but my body has let me down again and that means that I am unable to do some of the lone dog, free spirited actions of my own desire once more. My back has been tolerable of late but I had an MRI on my shoulder to assess the results of the keyhole surgery I had last spring. In short, it ain't good. Having trimmed a tendon and scraped a couple of bits of bone to free future passage of said tendon, it would appear that three tendons are ragged and torn. Two of them have almost gone right through! I need a bigger operation. I have told the lovely lady doctor I've been seeing that I intend making the most of the summer before going through another recovery period and, bless her, she has arranged for me to see the surgeon later in the summer so the operation should be in the autumn.

Bugger! That means I may not be able to redirect the path.

Back To The Beginning

I didn't manage to fish the river Tone last year so my fiftieth anniversary of tangling monofilament passed without ceremony but today I did it.

I have been spending a lot of time looking after the First Lady of the house of late. Nicky has added a couple of new ailments to her already too long list. It's been worrying but things are settled now and she'll be responding to the whip again pretty soon. It was her that sent me on a respite trip and it was to my old mate Paddy that I turned. It was at his house on the edge of Exmoor that we got drunk last night and this morning despite a bitter easterly wind and a gnawing hangover, we gave French Weir on the Tone a go.

The problem with umpteen happy memories of balmy summer days and mild end of season roach fishing is that they were actually less common than my recall probably gives credit. And to stand up on the weir bridge and face the full blast of a Siberian breeze did little for the blood circulation in my hands. I had forgotten my camera (twit!) and felt little inclination to use my phone as my digits were not responding too well. But I did catch a few.

I had three small chub off the weir before I sought shelter. When I sat in the 'One Hour Swim', I had the wind to my back and actually enjoyed some welcome sunshine. The Hour Swim has always been an enigma as, in those previous years, it would always fish well for about an hour before dying. I tried every method of feed, light, heavy, intermittent but it was always the same except for one day when it fished it's pants off all afternoon. Today it ran to form and gave me a few small trout, dace and my only roach, small but very welcome.

One more swim produced another little chub but my arm had lost the strength to hold the rod or hit bites so I did the sensible thing and left much earlier than I had planned.

The day was a great reminder of my roots and it was a pleasure to fish the old haunt with Paddy. He also got much from the day.... but, like me,  not much in the way of fish. I also got to meet Paul aka Paffpuff (don't ask, I don't know either), a fellow forum member who now fishes much of my old stomping ground. As he left I shook his hand which was like a block of ice, we are a mad lot us anglers.