I went back to the swim I fished in my last entry today. I know it shows a lack of ambition and adventure but I wasn't feeling particularly energetic and this swim suited my needs. I fished it in an identical way as I felt that the chub would still be in residence even though the river was a good three feet down on last time.

I lobbed a feeder full of bread out at a few minutes past 1pm and sat back, squinting at the bright sunshine. It was remarkably warm despite the frost last night and the inevitable one that shall follow this evening. With less colour in the water  I figured the fish may be cagey and the first bite proved this to be the case as the rod jabbed and I struck at fresh air. This was repeated on the next couple of casts with bread as bait so I hair rigged a knob of cheese paste instead. It didn't help.

The fish were just not having it, they were playing with the bait and edging away with it or slashing at it but not doing enough to hit them. I decided to get cute. 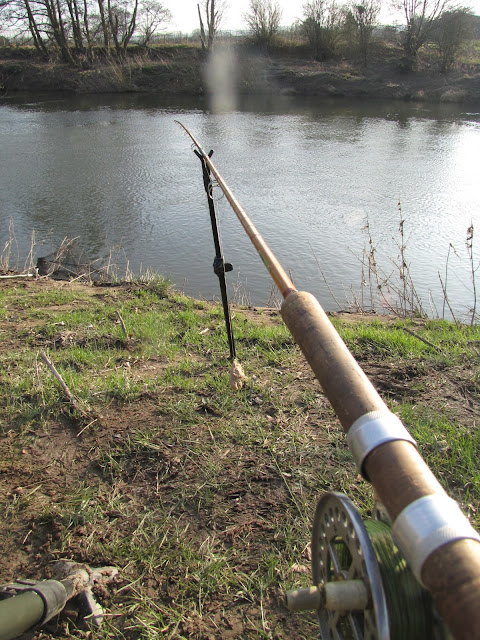 I cast again, this time the cheese paste had a lump of flake to accompany it and the free running feeder was filled with a knob or two of paste and plenty of liquidised bread. I then went all old school and put a bread bobbin on the line between the reel and the first ring........ and waited.

It didn't take long, the bobbin twitched then slid toward the butt ring, I lifted the rod and pushed it forwards effectively giving the fish extra line. It kept going. I struck and had a good little scrap with a beautifully silvered chub that flashed in the clear water. It was an ounce below 4lbs and was enough to make my day. 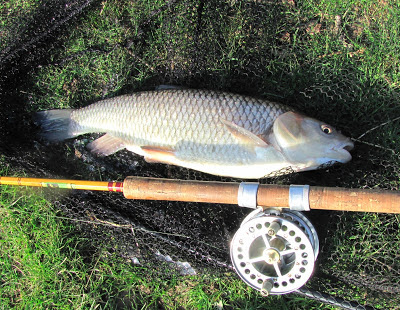 I missed a very fast bite soon after then the swim went quiet. I felt I'd done what I came to do and packed early before the temperature dropped. 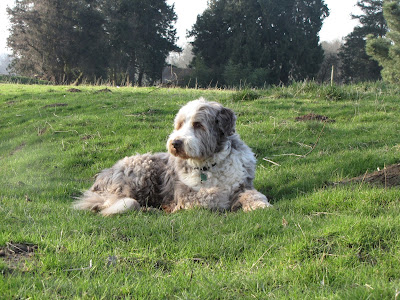 Getting to know you.

I put the food blender thingy into the bag of bread and hey presto, liquidised crumb, the winter groundbait par excellence. I'd kept back a few slices for the hook and grabbed some cheese paste from the freezer - time to fish.

My choice of swim was governed by how far I had to walk but I was happy that I stood a good chance of a chub or two. I dropped a handful of bread and a few balls of paste into three likely swims then settled into a crease swim between a couple of overhanging willows. Out went a feeder full of crumb and a lump of flake on the hook, I sat back and began to relax wondering how long before my association with my newly acquired New Superb rod and Hodder reel would become fruitful. It didn't take long. 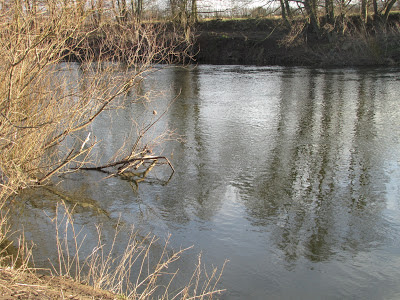 Just ten minutes after casting the rod pulled down toward the river, I lifted into a spirited fish and purred to myself as the rod absorbed the lunges with plenty of power to spare. In the net it was obviously a good chub so I decided, unusually for me, to weigh it. I was glad I did, it went 5lb 4oz, a fitting first customer for my gear. 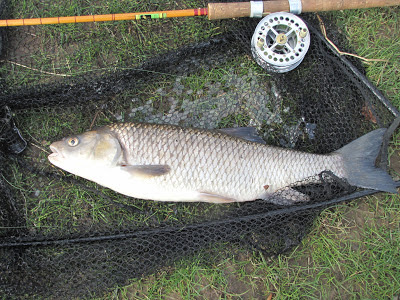 I put a bit more bait in then fished the other swims I'd prepped for nil result. Despite the lack of action, whilst sat down the bank and out of the wind, the low winter sun was warm and I felt very comfortable. Alas I did not stay long, the first swim was calling me back and I sat myself down for the last of the daylight. Immediately the increasing northerly wind felt colder and as the sun dropped behind the trees on the hill opposite so the temperature plummeted. I sat huddled in my thick coat with hands in my pocket, I was tempted to have Harvey on my lap for his warmth but he's a restless so and so and I'd have just got muddy. I had a few taps from small fish and a quick take that again probably came from something small. It felt like another fish was on the cards. I switched to cheese paste and had another, more positive bite which resulted in a chub of about three and a half pounds, that was enough, my hands were now frozen. 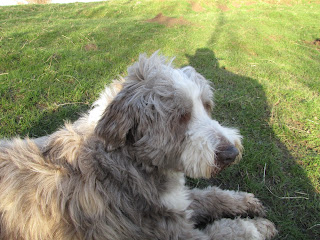 Despite there being maybe half an hour of light left before it got dark I trudged back to the car and quickly put the heater on, they'll still be there next time and I'm eager to have another trip with the rod and reel.
Posted by Dave Burr at 20:29 10 comments:

When you simply positively absolutely have to....

I'll be honest 2013 started the way 2012 finished - badly! A family member taken to hospital on Christmas day, worry for a while then, after a brief respite, a death on Nicky's side. To exacerbate the situation we were unable to get to the funeral due to the snow.

To escape from the stress and the weather we had a very pleasant stay in Devon where we relaxed in front of the fire and read a lot. Coming home you soon realise that such holidays are temporary affairs and the search begins for a boost, that quick fix that helps you through this miserable time of year. So we went to an auction.

I really shouldn't be allowed in these places as they are an exciting Aladdin's Cave of treasure that titivates the senses whilst reducing the common sense. I am always fascinated by the taxidermy even though I have nowhere to display a large fish, bird or antelope's head. The tiger skin along with the photographic account of its demise, the boar lance (great to dissuade poachers) the ski's, the saddles and, especially attractive to Nicky, the fur coats. Oh no, you could never wear them without a tin helmet but they are beautifully made, look wonderful and are extremely warm, what is more coats that cost over £1000 many years ago are now going for around £100 - tempted? There was one made of pony skin - I'd love to announce that in certain company, light blue touch paper......

But the main reason for being there was of course the fishing tackle. Last time there was a plethora of goodies but this time considerably less and, to be blunt, the quality was much lower. However, a pearl amongst swine shone through and I put a cane rod together and swooned at its beauty. Neil was with me and agreed that it was a bit special, I left a bid. 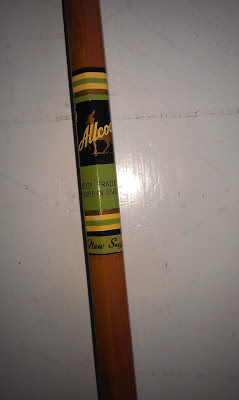 At home I discovered that the rod was indeed special and rare, an Allcocks New Superb which is designed to tame barbel and carp - I figured my bid was too low and knew that I simply positively absolutely had to have it. I went back to the auction room to bid in person. The bidding was frenetic and shot past my first estimate, I joined in the fray and found I was up against John Farey a dealer and the owner of the highly recommended Fisherman's Emporium. I figured that if he wanted it that badly it was worth the effort so I dug in and eventually the hammer fell in my favour. I breathed a sigh and went to speak to John who said "If I'd known it was you bidding I'd have backed off", now he tells me! 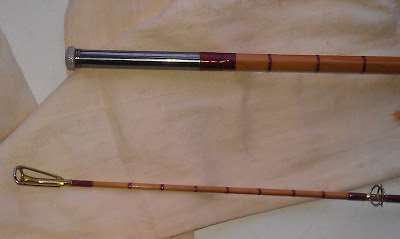 This tale has no moral, it is an account of retail therapy and a fortunate find or two. I won't recommend any of you going to sporting auctions as I don't want the competition should I spot another gem. So maybe there is the moral, stay away from auctions, unless its ebay and you want to buy a very good pike book. 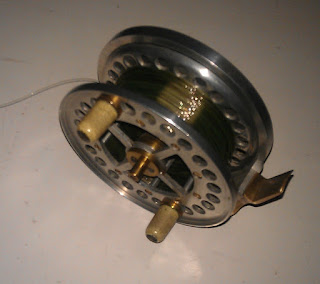