Friday and I was almost ready to go. A two night trip to the lake with Neil was the idea and I was collecting the last item of tackle when my knee gave out. It had been doing this, off and on, for a week or so and I thought it prudent to dig out the knee brace.

I nipped to the bedroom, strapped myself up and took two steps forward. The next minute or so was one of me hobbling toward the front room whilst uttering gutteral noises that were a mix of comments on the pain level and a list of every expletive I know. "What's up?" said dearly beloved, "If you don't say I can't help you". Eventually I was able to breath normally and find my voice, I expressed myself clearly as I slumped into a chair with one last, very loud, curse.

Trip cancelled and off to A&E. I could put no weight on my left leg neither could I straighten the damned thing. The doctor was talking about laughing gas and hitting it back into place but he couldn't find the right pain killers so it was two Paracetamols and a full Velcro leg splint. Getting back into the car was reminiscent of this.... 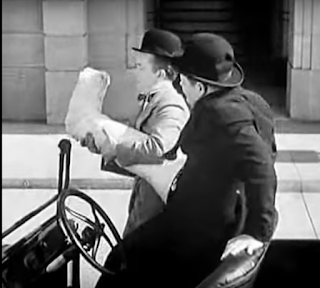 I thought I was in for a long haul of immobility but by the Monday appointment back at the hospital, all had settled in my left knee and I was told to go away. The problem was though, the limping had thrown my back out and the sciatica was making my right knee hurt - a lot.

By the following Sunday I felt it necessary to have a day session and gingerly descended the steep bank to my chosen spot - about five times to get everything in place.

Despite the potential of this swim I failed to get so much as a twitch. I found some fish feeding nearby but it meant shifting tackle and an even steeper climb. I took the blank and left.

Frustrated by my lack of fishing - well, catching, I was back at the lake last Friday. Another two nights planned, again with Neil albeit he'd only be contactable on the walkie talkies as he was as far from me as possible - charming. I got there first and picked an area where I'd seen fish moving on my last visit. It was a long chuck across and it took me a couple of hours to get three rods set up, bait in place and everything ready to go.

I didn't want three rods on the same spot and decided to drop one short. I've had plenty of fish from the margins but in this swim it's very shallow. I found the drop off into deeper water about 20 yards out. It was reached by casting around an overhanging tree from an awkward angle which, I figured, would make it virtually unfished.  I baited lightly over my rig thinking that steady feed over the session may bring a bite there from a cruising fish or two.

Soon after casting, Neil arrived and collected some bait from me. I had a single 'bream' bleep on one of the distant rods, we both commented on their nuisance value. As we chatted I heard another bleep - bleep but this one became a one toner. It was the inside rod and a powerful fish headed off left with me pretty much helpless to do anything about it.

"Well, I'll be off then" said Neil, which made me laugh. He did stay and offered encouragement and comments on the fish's strength and cunning as it powered through branches hanging in the water and made powerful long runs all around. Then its back came out of the water and we both gasped at how dark it was, most unusual for this water. Maybe the hot weather and low, clear water has had an effect.

After a memorable fight it went into the net without too much fuss and weighed in at a satisfying 31lbs exactly.

There you are. A pretty rubbish season so far then a thirty after twenty minutes on a new spot. Fishing eh? Don't you just love it.

I was satisfied but fished on until dusk when I wound in and slept long and happily until my dream about an attractive girl kissing me became my dog licking my face as he wanted his breakfast.

The forecast for the next day was rain, rain and more rain. I hate packing when it's wet so I decided to call it quits and head home. Neil stuck it out and had seven fish, six of which were over twenty pounds. But hey, I was only fishing for thirties. 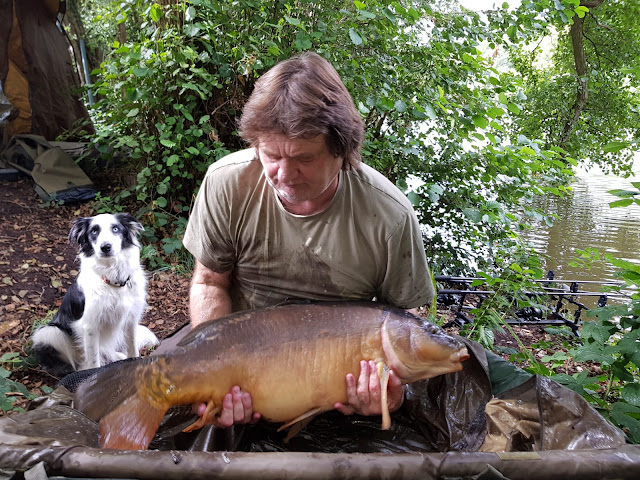 Sat, overlooking the lake in it's summer glory, listening to the tits and robins chattering behind me I am relieved to have at last sorted three rods and cast them to my chosen spots. It had taken some time and I was glad of the sit down. This carping lark seems like very hard work at times.

I took out my diary to begin the entry that would see me hunting carp for the next forty eight hours or so. Looking at the index, a simple list of dates and catches, I could see that I had been beside water jut three times since the end of May and had landed the princely sum of three small roach. No summer has been so bereft of fishing action.... probably in over fifty years of angling. Why?

I have never looked forward to a carping year so much in my life and the inclusion of a shallow estate lake to my available waters had made me giddy with anticipation. However, it all got thrown out of kilter by the weather.

My first trip to the new lake saw me forget my sleeping bag and I froze during the night. From then on the weather (you may recall) has been stupidly hot. I don't do heat and have suffered. Now, I don't mind a spot of suffering for the cause but that particular water demands you sit facing the full glare of the sun and, if there's one thing that put's fish off in a shallow, clear lake it's blazing hot sunshine. The idea of sweltering all day in the hope of a bite in the wee small hours does not turn me on. I put the lake on the back burner and sat back, waiting for a cloud or two to appear.

In the mean time I had a gander at the Wye. Neil and I had a go one evening and both chose seemingly perfect evening swims for the conditions. These spots are always good for a few chub as well as a barbel or two. That neither of us had so much as a tremble on the tip led us to realise it was not the place to be. I will not fish when I feel the fish may suffer from my actions. I have waited for days or weeks until the fish have spawned and recovered enough to be worthy of pursuing and, when the river looks low and sick, it's a no brainer.

I felt that my other carp venue may be suffering and opted to wait for some rain. That wait dragged on and on and with the separation from the routine I guess I just got out of the fishing habit. It seems I have missed some good fishing as the carp have fed well and dealt with the heat admirably. Ah well.

So there I am, eager to get a bite or two and yes, I had six of them in all. On the downside, three came adrift - don't ask, just bad angling I guess. I had one small common at my feet in the early hours. I was deciding where to land it as it was sat between two rods in a decidedly awkward position. As I ummed and aahed it wrapped me around a leg of the pontoon and was gone. I was gob smacked..... but it was, again, bad angling.

I landed a couple, another common of 8-10 pounds and a mirror of 16 -18 pounds. I didn't even weigh or photograph them.

One of my spots was full of snags so I chose to move the rod despite having baited it quite heavily. Where did I see plenty of feeding activity, rolling and crashing fish? Like I said, I won't fish where it's going to cause harm so I sat grinding my teeth. But I may get in the boat and pull that big branch out.

The title mentions "loads of bites", and yes, I have had more than my share this summer but they have been from mosquitos, I've been eaten alive! Anybody else getting mullered by the little bastards? Most years I can go without so much as a lick from a mozzie but 2018 has seen me giving blood on a regular basis. I lay in my bivvy drenched in anti-mozzie spray of oil, citronella candles burned and I wore base layer clothing to cover most of my body. Yet, come morning and the little shits have snuck into my sleeping bag and have made my back and arms polka dot. They itch like nothing else and it's enough for me to wait until winter for my next trip.

But I doubt it. 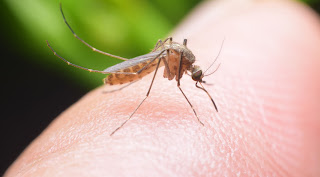