The Summer That Never Was

When I last posted, I had finally caught a fish worth a picture. Was this the start of something big? Was it hell.

I struggled and conceded defeat, only to find that the lake had switched on soon after. But no matter, I had my river head on and the search began for some of the plump chub the Boy had caught from the Lugg last year.

The visits to the river entailed long walks, some very dodgy bridges over ditches and an assortment of characters of the non-fishing variety. One such ensemble consisted of a lad, a young Polish girl wearing jogging shorts that had been sprayed on and a flimsy top (my, how observant I am), and two other young ladies so attached to each other that I feared there had been a Superglue accident.

I exchanged greetings with the giggly group who were joined by another lad. "Enjoy your picnic," I said, and one of the siamese lovers replied, "We're having KFC". I called back, "From here it smells like you are smoking the secret recipe of herbs and spices". That amused them and I was offered some of the hinted-at weed. I declined, knowing that I would find plenty of 'weed' where I was heading. 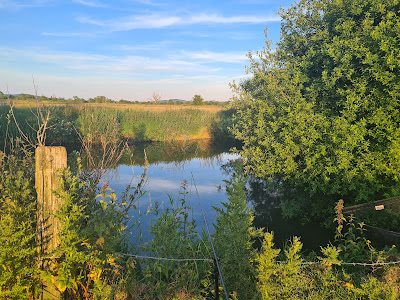 Just one of the many swims I blanked in

That was another blank shortly followed by more. Neil, my lad, was fishing harder and more often than me and fairing no better. Time for a new project.

I attempted to up my pb crucian carp last season but bearly passed the pound mark. A couple of trips in the heart of the Midlands saw that pb creep up and stop at 1lb 13oz. I was pleased with the fish and the backup fish on the day and look forward to the next nudge to a 2lb plus fish next summer. 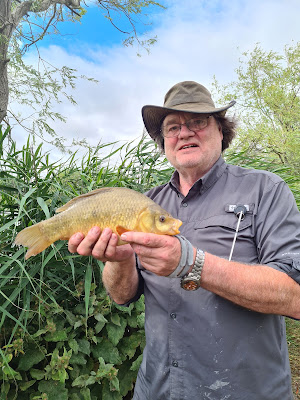 August arrived and a holiday in Pembrokeshire where a morning bothering the goby population was interrupted by a large triggerfish attacking Neil's catch on the way in. That and several decent bass that cruised around, harrying the large shoal of smelt made us realise we had aimed too low. The next outing coincided with a mighty rising tide that we were unprepared for. Maybe next time. As an addendum to this anecdote, I let fellow blogger Ordinary Angler know about the triggers as it was his posts that inspired the holiday fishing in the first place. He went himself and showed just how it should be done. I congratulate his success albeit through gritted teeth. 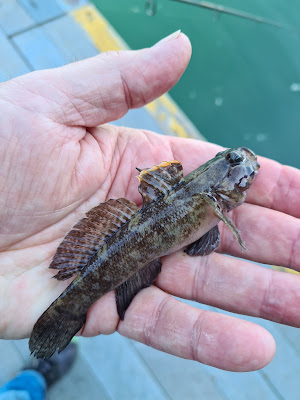 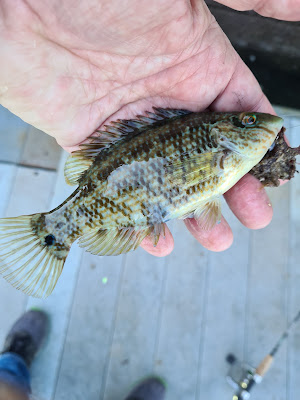 Returning from the break both Nicky and I had each brought home a souvenir. Nicky had Shingles,  a painful and debilitating condition and I had badly torn the ligaments in my left shoulder. I could tell you the full tale but, I'd be embarrassed. Suffice to say that I was playing football against the grandbrats and attempted something that I haven't done for fifty years. Apparently, I was younger and fitter back then, I must try to remember this in the future.

As Nicky slowly recovered some energy and I was going mad with the frustration of not being able to fish, so I went down with Covid, followed a few days later by Nicky. And that brings me up to a few days ago. It hit us hard and we are still below par. I was beginning to think that I'd never get a decent fish before my second operation on the errant thumb next month.

On the spur of the moment yesterday morning, I grabbed a few sticks of tackle, bait and hope and headed for the carp lake. I received a lot of 'those' looks from dearly beloved and she was probably right but when the need is this strong...

The lake looked quiet with the only surface activity being caused by goosanders that soon left as I approached. The Bay, an area I can fish with minimal casting involved, looked pretty dead, it usually produces when you can see cruising fish so, my optimism wasn't exactly peaking. Hey ho, I tied a rig on the car bonnet and got everything sorted. My rod was an unnamed three-piece cane job bought for a pittance at the Redditch Vintage Tackle show, the reel a tarted up Abu Cardinal 155, proper fishing.

I got myself ensconced at the bottom of a steep bank and waded into some chod soup, stiff with dead weed, leaves, silt and sticks. My second cast was perfect and a wafter bait slowly landed on the soft bottom. I tried to catapult some freebies out but the shoulder/thumb combination made it difficult and painful. I found that by holding the 'pult upsidedown and sort of flicking it out, just about found the right spot but suffice to say that baiting was 'light'.

I put my chair up and sat back to eat my lunch, where had the morning gone? Too much faffing about on my behalf. Food eaten I was about to open the flask when I had a couple of bleeps and a buzz from the Abu ratchet, everything had gone tight and I lifted into a heavy weight hell bent on reaching a lily bed. I leaned against it and a swirl showed I had halted its progress. I now had to get into the water to play and land the fish.

Lowering yourself into the water off a tiny ledge whilst maintaining contact with a running fish is not easy. Just last year I ended up doing a face plant into the fetid water so, I took great care and thankfully succeeded. The carp was heading across me and it all got a tad feisty as my cane rod groaned but soaked it all up with aplomb. I had waded a little deeper but the net needed to be at arm's length which I did with gritted teeth. The carp saw the net and headed back across the bay, deep and heavy.

Eventually, I got it over the net and heaved it to me, it felt like a good one. Pulling the net apart, I could see the broad shoulders and the length that told me it was a thirty.

It went 30.11 but felt heavier, mind you, with one thing and another, my arms have lost some strength, I need to build that up and soon.

During the landing and resting the fish in clear water, I lost my glasses and, by the time I had sorted all my gear out, I was knackered. Time for home, with a detour to the opticians, all after less than half an hour with a bait in the water. 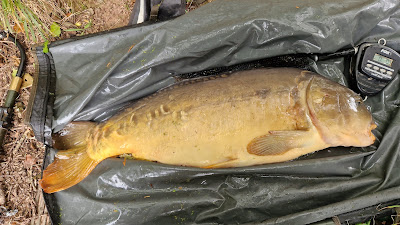 At last
I'm feeling it today but, at least I've had something decent in this most trying of seasons. I may get a trip or two in before my op, but I am mentally prepared for the layoff and look forward to the future.