The trouble is a nerve that is either trapped or is playing up due to a disc that is out of alignment; more physio has been booked and it can't come quick enough. I can't walk far or carry anything heavy, two essentials when fishing especially when the river's up, there's no parking in the fields and all the good spots are a hike away. If I do walk its painful, then I get an odd warm feeling down the outside of my buttock and thigh as though someone has wee'd down it - well, that's how I explained it to the Doc and he then asked me if I was "peeing and pooing okay?" I told him it was just an expression and I hadn't really wet myself but he didn't smile, just repeated his question! Hey ho, after a 'wet leg' my foot goes to sleep and my leg gets very heavy........ and I moan a lot. Mrs Burr is about to either leave or put a pillow over my face if I don't buck up, its been dragging on for a while now.

Apart from that its going very well.

But yesterday it felt a little easier so I went for a wander around my syndicate water. The path on one bank is quite easy to negotiate and, by taking my time I managed to cover most of the north bank. I was rewarded by plenty of activity from the carp that were up in the water despite the cool and overcast conditions. I saw more carp that on any other visit as they cruised about just below the surface with the occasional fish leaping and splashing back into the calm water. It was all very mouth watering and frustrating as I had no tackle with me. As you will see in the pictures I found fish grubbing about in the shallows as well as cruising over deeper water, they really were everywhere and I am tempted to have a go very soon. I know I can't manage a full session as the field's too wet to drive over and I'm not up to 'barrowing' my gear that far but I saw enough fish within reach of the dam where I can drop my gear and day-fish with the minimum of effort - yes, I'll give that a go. 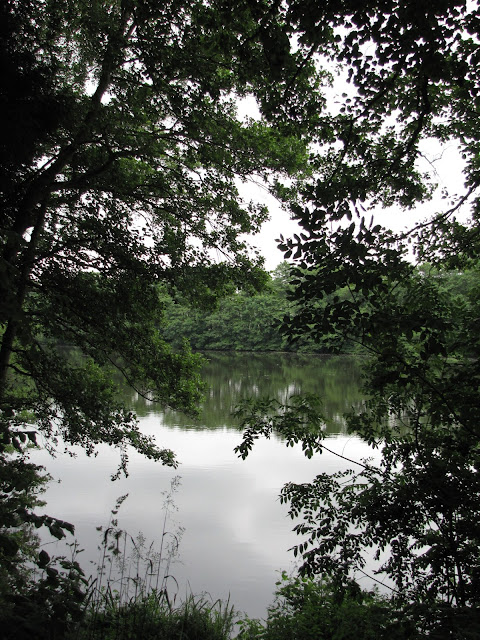 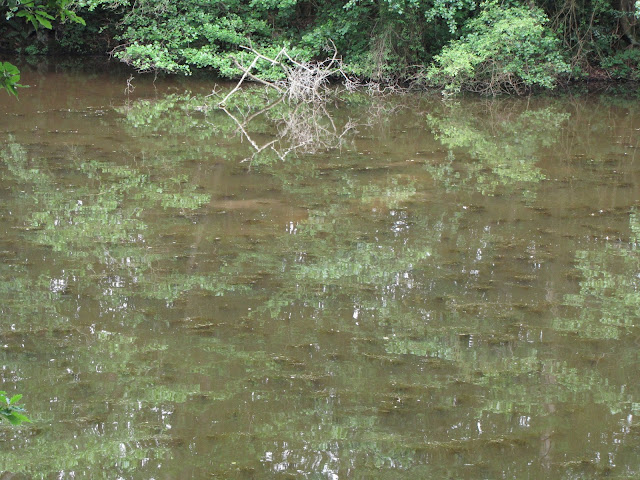 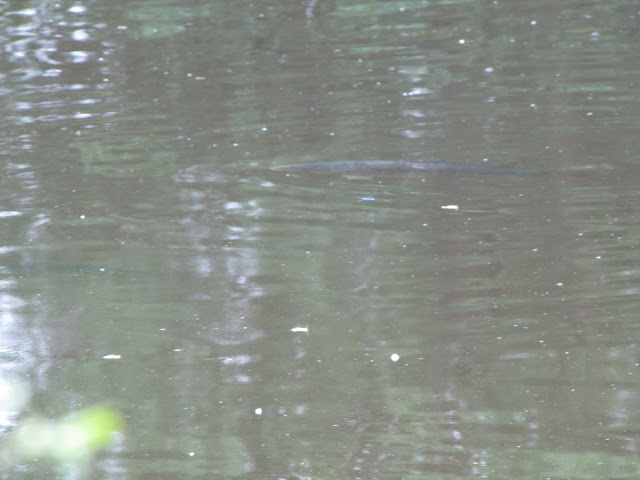 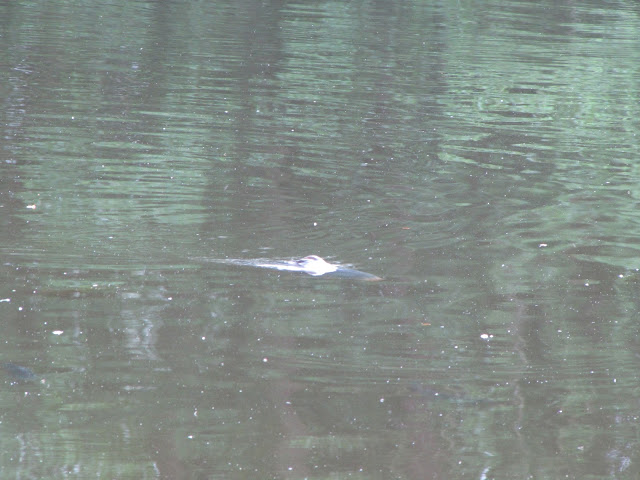 As we returned to the car I saw a spectacle that I have often heard of but have never witnessed in this country before. There was a mass exodus of baby frogs from the lake and everywhere you looked little miniature amphibians hopped amongst the grass as they sought refuse and food at the start of their terrestrial live's. It was an incredible sight and one often described by my parents as something they had witnessed at 'The Pond' near our home village. Sadly nowadays what with there being a lot less frogs around, it is only something that happens when they have a particularly good year but it does bode well for their future so good luck to them. They were very fast and difficult to photograph so, apologies for the poor effort. 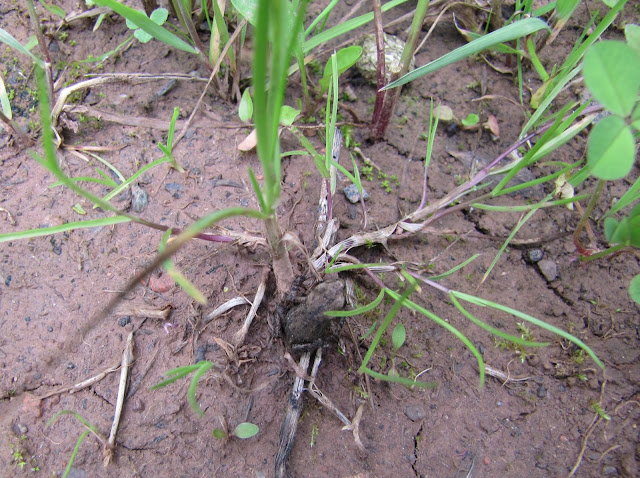 That's me for now, sorry I'm on a downer but a man wiser than me once said that 'life is like a pubic hair on a toilet, eventually you'll get pissed off' and I promise that I'll catch something soon and tell you all about it.

Of late I seem to buy a fishing book at least once a month, I just can't help myself. My shelves have collapsed - literally - and the books pile up in my other bookcase, on the floor or spread around the house in a state of 'started but not finished' as a new or more interesting title takes my fancy. I have books on all types of fishing from the humble roach to adventures in exotic foreign climes for big game species or enormous sharks, I love them all.


Many of my later additions have been passed straight onto Neil as, let's face it, that's where they will end up so he may as well have the trouble of storing them now. Yes, I originally thought that I would buy them as some sort of currency, an investment for the future and many of the titles I've procured have increased in value beyond my wildest imaginings. But then Neil discovered Chris Yates and the magical way in which he puts our language onto paper. He was absorbed and read all of his work one after another, this highlighted when we went to the Hay festival where Chris talked about his then latest title 'How To Fish' and Neil duly queued to get his copy signed.


Neil moved on to my carp collection and fell in love with the work of Rod Hutchinson, a master angler and raconteur so I recently bought Rod's latest two 'Carp Along the Way' books. This was recently joined by four books by Rob Maylin, Terry Baxter's 'Barbel Mystique' and Jon Berry's 'Beneath the Black Water' and just the other week a first edition of 'What's My Line' that came, compliments of Ebay, all the way from Australia and so the list continues.


I have my favourites of course, some are just part of my life and will never leave my shelf such as' No Need To Lie' by Richard Walker, I was given this in the mid sixties and I have never exaggerated the size of a capture since reading it. 'Somewhere Down the Crazy River' (Boote and Wade) is a must have for any dreamer as is 'Hooked' by Fen Montaigne, a tale of fly fishing across Russia. Peter Stone's 'Come Fishing With Me' falls into this category along with many, many others. I can never sell my books, they are my friends and, in the future they will be Neil's.


My latest addition arrived the other day - 'While My Float's Still Cocked' and I flicked casually through the first few pages. My first impression was that it was a book that many of us of a certain age could write, it was just that this chap had a talent for painting which made it look special. But as I have got deeper into the recollections and tales of Maurice Pledger I have become enthralled and inspired and any book that makes me yearn to hold my rod over a small brook or pool is a winner as far as I'm concerned. So, I highly recommend this little book, after all, none other than Chris Yates himself rates it and he can do no wrong. 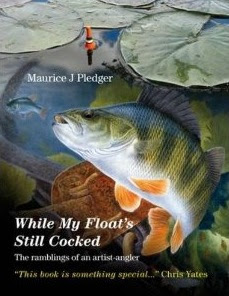 It didn't take long did it?

Nicky and I have been coming to terms with an empty house and having to listen for the door bell and telephone, two of the jobs Buddy elected to do on our behalf, and were even planning a break abroad for a week or two. We looked at a few brochures, even spoke with a Travel Agent (how old school is that?), then thought, 'what the hell, why go away when we live in such a beautiful spot'. To celebrate our decision we took a stroll through the village, Laura our neighbour walking with us for a while and Imogen, the Doctor's receptionist, pulled up in her car to make comment that Nick and I were hand in hand. It was one of those gentle strolls that we enjoy on a summer evening and make you miss having a dog more than ever.

We passed the village shop and were called in by Laura; Imogen and her had been discussing dogs and Imogen had one that she needed to re-home. "Want a Bearded Collie?" said Laura excitedly.

Half an hour later we were at Imogen's meeting 'Harvey' a nine year old Beardie who, because of her increased work load and family ties, was being left alone for much longer than was desirable. Imogen  had come to the reluctant decision to let him go and would be delighted if we could take him on - we have.

He's settled remarkably well and already feels like one of the family - cute eh? 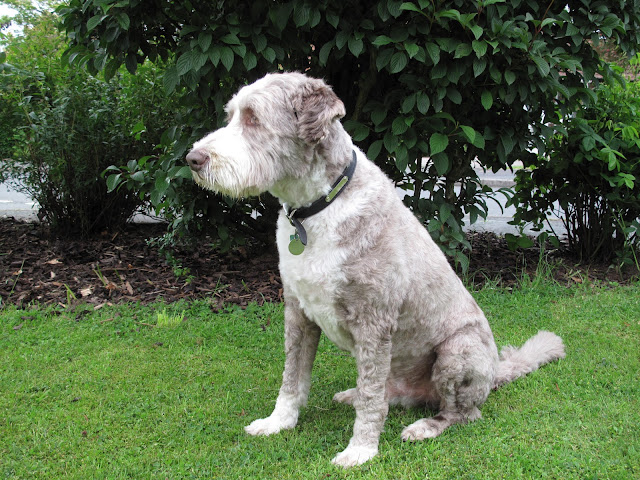