Sold For A Farthing

We'd shared a cream tea and had spent some time 'people watching' as a group had entered the sparse cafe. Each wearing a similar red sweater. Their quiet jostling for prime position and the establishing of a pecking order was entertaining to witness as was the consolation prize for the losers who gained solace by claiming to have made a superior choice of cake.

Nicky and I then entered the rear of the property, a labyrinth of rooms and staircases, each festooned with shelves groaning beneath the weight of old books. This is what Hay on Wye used to be, before the Festival and the arrival of the tourists and the raising of the prices. This cafe come bookshelf is just far enough away to retain it's own charm.

As I moved deeper into the rearmost room I had to stop and breath in that special aroma. A musty smell unique to old books that have absorbed something of their lifetime's surroundings. Heady stuff for an avid pair of searchers like us. We smiled at each other. It said everything.

Upstairs I found an eclectic mix of unclassified books that bowed the shelving. I was drawn to some 1950's children's books with imagery that threw me back fifty years to my youth. There were treasures everywhere but I was drawn to one little yellow book in particular.

I do not claim a sixth sense or any superhuman abilities but, for as long as I can remember, I have used a method to make choices. I hold my hand over objects and, when I feel a tingling sensation, I opt for whatever is below it. I know, its ridiculous and I'm probably having little strokes or something rather than any divine intervention but it works for me, sometimes. Anyway, this book just demanded to be looked at, so I flicked through it's pages. then put it back on the shelf.

It may have been the recommendation of 'H is for Hawk' on Monty Dalrymple's excellent blog that was at work in my subconscious but, as I rambled around for a bit, I again passed the book, picked it off the shelf and took it to the tills. "What's it about?" asked Nicky. "I dunno really, something about the life of a sparrow". 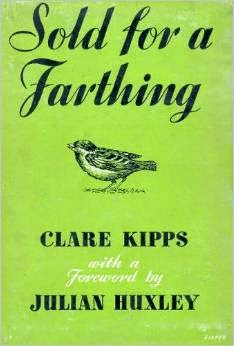 Sold For A Farthing is a must for anybody with an interest in ornithology and for anybody seeking a heart warming read. Its a small book and fitted nicely in my fishing bag on one of those days spent trying to bore a barbel or two into submission. Yet it contains so much. The tale is the true story of the author finding an extremely young sparrow, naked and blind and cast from it's nest. By some freak of luck her decision to take it home and nurse it was successful and a handsome if slightly disabled bird develops.

Set against the onset of the second world war and the turmoil and upset to life a conflict causes, the little bird flourishes into a creature with a definite personality. Likes and dislikes are developed and, as is our way when close to nature, tricks are taught. The most remarkable thing about this little sparrow is that it develops a voice, it sings. Not the cheep - cheep of a 'normal' sparrow but a complex song and trill. That the author is a professional musician this phenomenon is studied in depth. It is likely that this bird sang more beautifully than any other sparrow before or since.

The author tells little of herself yet much is learnt between the lines, she too has a great outlook on life and understanding of humanity and wildlife. It is both interesting and touching and just a fine little book. Cheap too.  http://www.abebooks.co.uk/book-search/title/sold-for-a-farthing/author/clare-kipps/sortby/3/  So go on, spend a couple of quid, find a quiet place and enjoy. But don't read the forward as it gives too much away.
Posted by Dave Burr at 12:53 2 comments: