Getting Back On Track

Let's face it, my last couple of months have been miserable. My sister developed pancreatic cancer and died all in the space of eleven weeks. A few days after her death I was in hospital having a painful operation on a particularly sensitive area (there's two of them and they are very important to us chaps), which meant an overnight stay and an extremely uncomfortable week or two to follow. This was exacerbated by a 400 mile round trip for the funeral - an emotional and agonising day.

But all things improve with time. I am still going through it a bit emotionally but at least my goolies are in the mend. I've even been fishing.

At the start of the week I was on the Wye for the first time since October last year. By all accounts the fishing is again sporadic and we still have a problem with people who think they can buy their fish by putting multi kilo's of bait into a low river where the fish are in relatively small shoals and not really on the feed. Ah well, at least when they blank they know that nobody else will catch from the section for a while. Well, they don't 'know' because they are idiots but you know what I mean.

I somehow managed to lasso a chub of a few ounces in the loop that connected my feeder to the main line. It was a tight fit and looked impossible but there it was. I also had one of a few pounds legitimately. It was the only action of the evening.


Today was a good day. I feel human again and a trip to the lake was called for. I decided I wanted to get one on the float and went armed with an old 2.25 tc 11' rod coupled with my ancient Hodder centre pin. The mixture of old and new was continued with a goose quill float and a modern rig bearing a wafter hookbait. 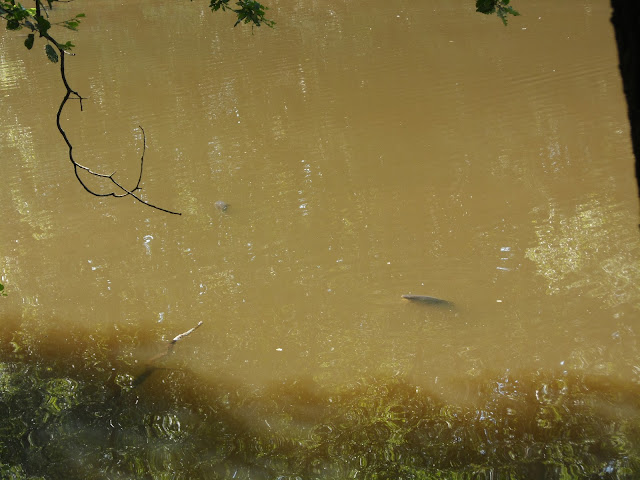 In the shallows carp showed all over, some sending up plumes of silt whilst other just hung in the water. I crept into position, flicked the float out, did it again a few times to scrape the rust off my abilities then settled back. A few small handfuls of groats mixed with dampened micro pellets followed to entice some feeding action. It didn't take long.
Just five minutes later a fish swirled to my left, close to the bank. Immediately after it created a vortex near my float as it either stopped to admire the feed or more likely to baulk at the sight of my line. There were a few bubbles, a bow wave and it took my float under. I struck out of instinct as it was obviously a liner, and I bumped it. Bugger. That would usually kill the sport.

I opted to remain and cast again. Over the next twenty minutes or so my float had drifted out of position. I suspect a bream had it caught over a fin or something as it was slow yet deliberate. I let it be as I watched a pair of carp enter the area and drop to the bottom to feed in earnest. I put them at scraper twenties but had seen a fish that I put at upper thirties further out along with many smaller specimens.

The bubbling and swirling of the feeding fish was extreme but I thought, too far from my bait. I decided to go for it and silently wound in and cast toward the action - damn! I wanted it to go beyond so I could reel back with a modicum of subtlety. But when your luck's in and all that. The float cocked and sank all in one movement. I tightened and a powerful fish shot across the lake which was away from the snags, so I let it go.

I then spent a while giving it the old heave ho as it kited under overhanging trees and toward a big snag. But I found my rod plenty firm enough and steered it clear and again let it go on a long, energy sapping run. After a good scrap I had it in the net and was surprised at it's size. Another long, lean fish of exactly 26lbs. I wonder what the big one weighs? 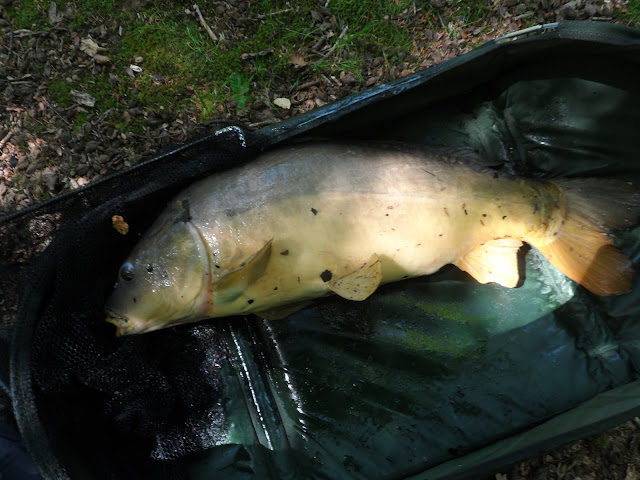 That was enough. I'd done what I set out to do. I went back to the car and sat overlooking an area with more carp cruising and feeding yet, I had no urge to tackle up again and cast. I wrote my diary, read a paper and ate my sandwiches pausing to watch a treecreeper for a while. It was bliss and, for the first time in too long, I felt relaxed.