So there I was riding on the crest of a wave, my fishing was going fine with a run of good fish and I had a couple of weeks sat by a carpy French river to look forward to. I was looking forwards to this date, the 31st as its four years to the day that I first blogged so I was going to have a little chat about the passing years and big up my plans for the start of June - then BUMP. I was hit in the ass by a car and all plans went out of the window.

It wasn't a massive collision but it has been enough to rattle my spine and, apart from giving me a whiplash, its stirred up my lower back which had been going along quite nicely. I'm not normally one to let such things stop me from fishing but I do have my limits and the idea of driving 500 miles each way is a complete no go. So I'm now a grumpy little so and so.

On the brighter side, having come to terms with Harvey's untimely demise, Nicky and I have been looking at dog.  In the past we've had rescue dogs and they've always been excellent companions but this time we have gone for a puppy. Good decision? Time will tell. Anyway, I'm not going far for a while so I can spend some time house training the little monster.

So, here's Cane - not the bamboo stuff (well, maybe a bit :-) ) but the Welsh meaning - beautiful and he certainly is. 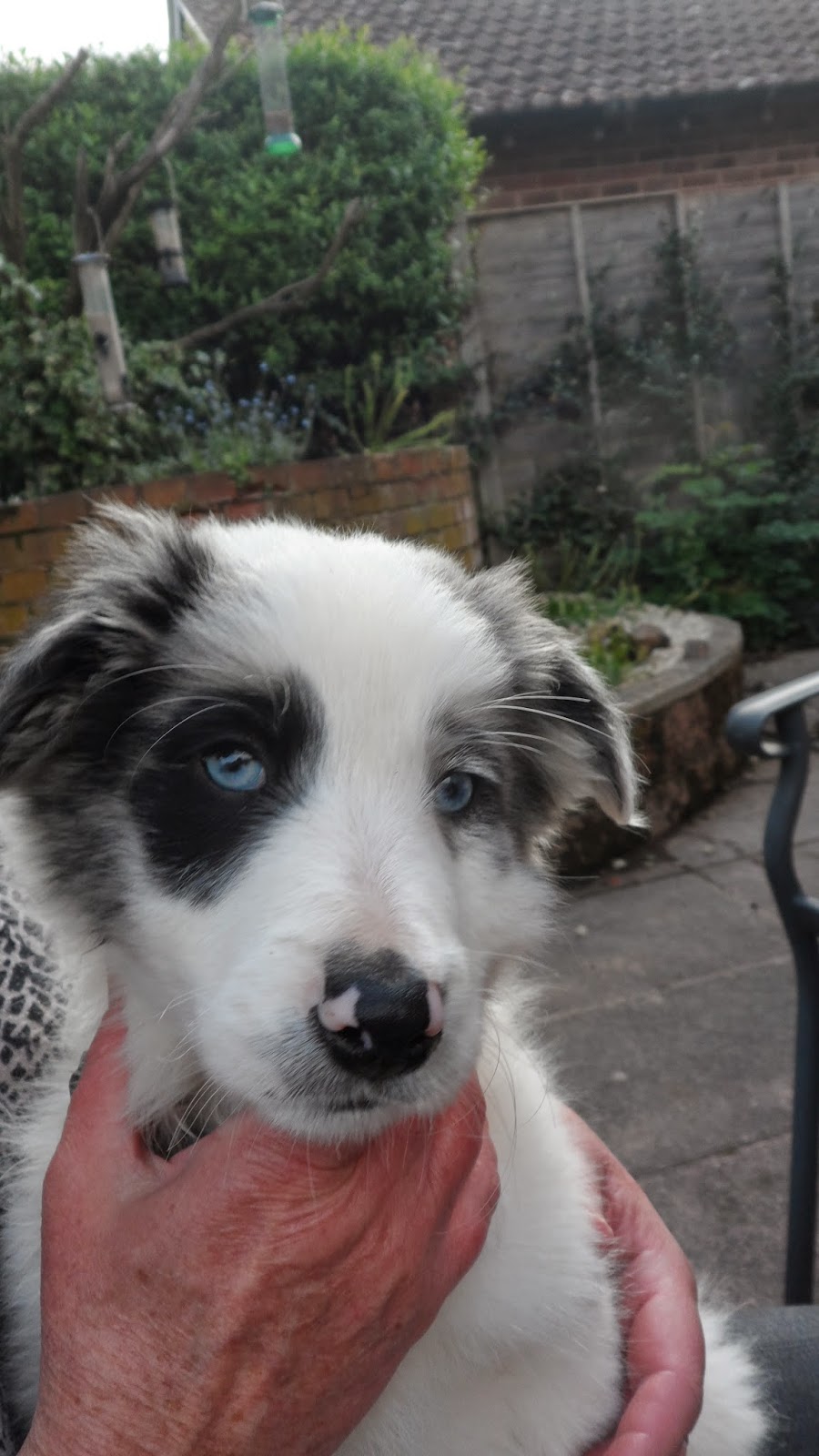 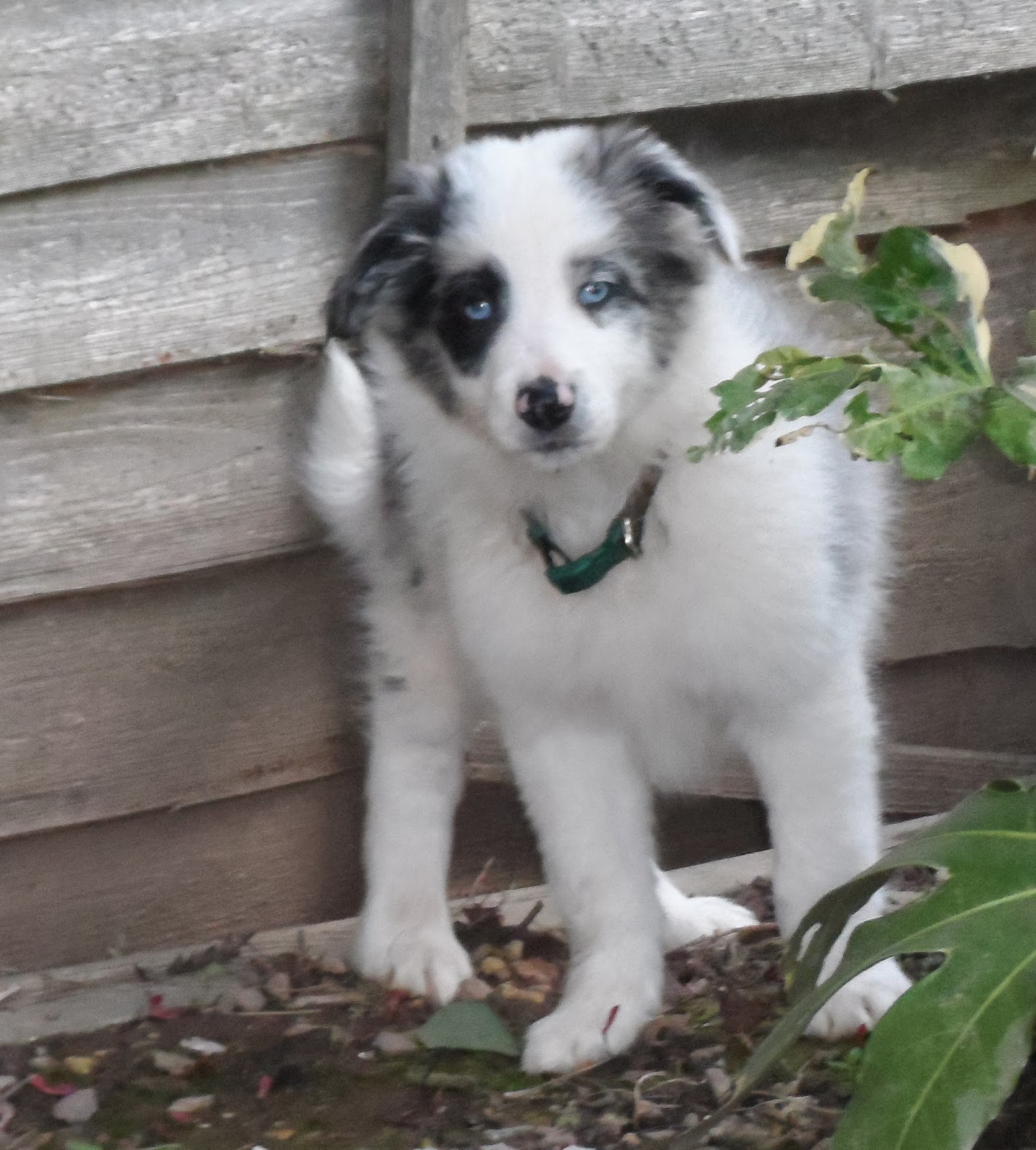 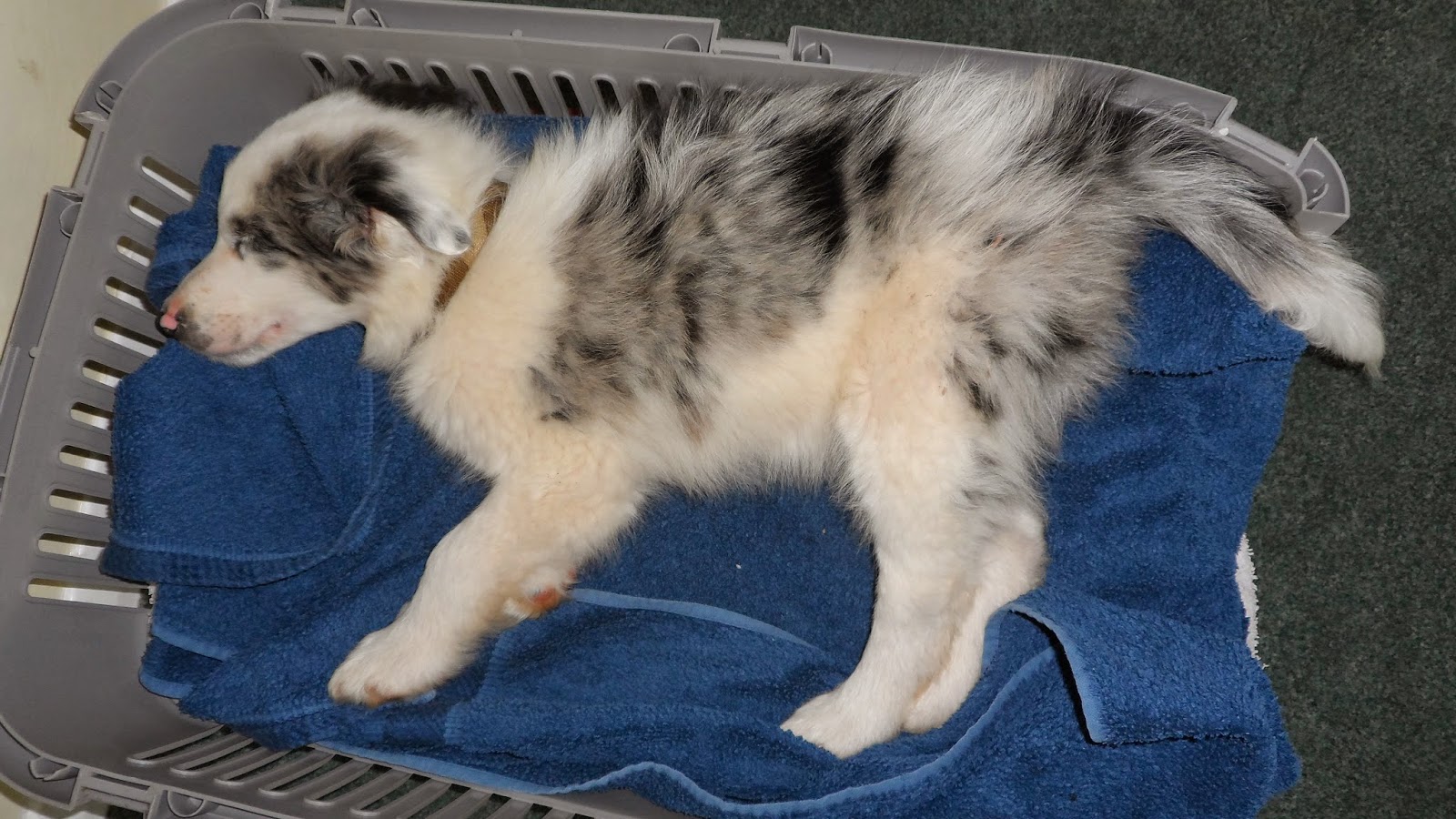 Last year it all seemed so difficult - everything felt difficult and my fishing reflected this. But I've come to terms with a few issues not least my inability to leap great buildings with a mighty bound or to walk half a mile without hurting. My new found positivity has reflected in my fishing - so far - and when you are on a roll it all feels just so easy.

I snuck out on a warm day to stalk the lake. On the approach track I found a young lady sat in her car and wound down the window just to check she was alright. She was delighted with her first close up sighting of a kingfisher and we chatted 'birds' for a while. I could not place the accent but she said she was from Sweden and then told me she was an au pair. "Wow, a Swedish au pair" I exclaimed, "are the rumours true". She blushed and I didn't press the issue.

Arriving at the area I intended to fish I found coloured water where the early morning feed had taken place but all the fish I saw were dozing in areas where there was no hope of getting to them without youth, agility and a reckless disregard for one's safety... and I fail on all counts. I baited a couple of spots but nothing settled on the feed, they were all just snoozing. 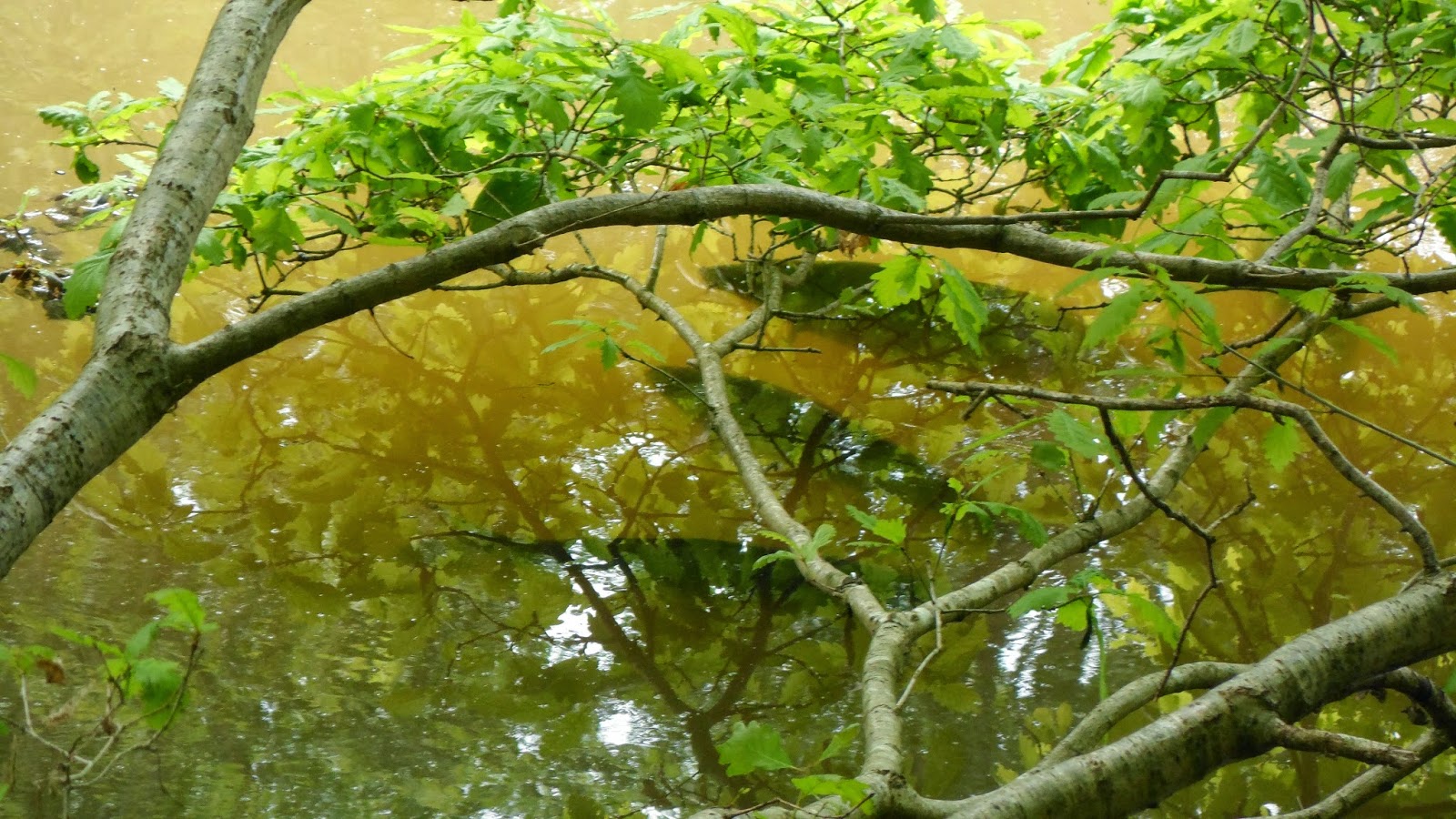 I arrived at a spot that's worth a few hours and put a bait out. I then sat back and finished my copy of 'Little Grey Men' by BB. Having read the entire book whilst sat in deep woodland with its rustling accompaniment from the undergrowth, it is easy to immerse one's self into the tale especially here where the bank has little caves beneath the tree roots, idea properties for the little people. As I put the finished book down a couple of squirrels noisily chased each other around a tree making me smile. 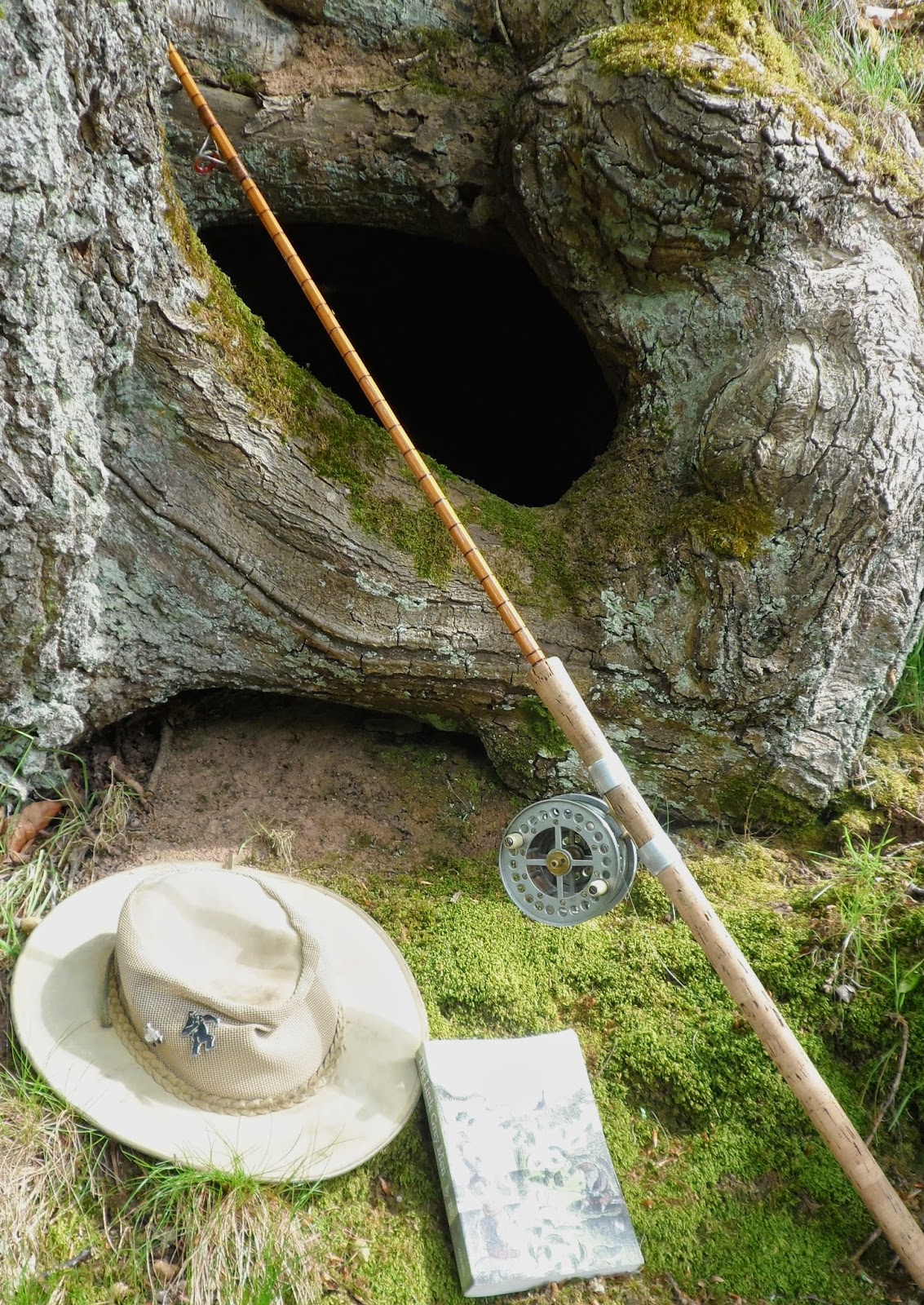 I had a doze and dreamed of alternate endings to meeting my the au pair. I needed a coffee to get me going again. It was around the time when the fish would normally move into the area and a couple of loud crashes indicated they were on cue. The reel screamed its alarm and I was up and into action.

My old Hardy rod took on its battle curve and the line ticked off the old Cardinal reel, a very lively fish headed for lily beds and tree roots with alarming pace, I waded up to my knees in the silty margins to get a better angle on it and, after an arm aching tussle, I netted a beautiful linear carp. At last I have one of the pretty fish.

That was enough. I could have moved to another likely spot but I was sated and I strolled with squelchy footsteps back to the car. 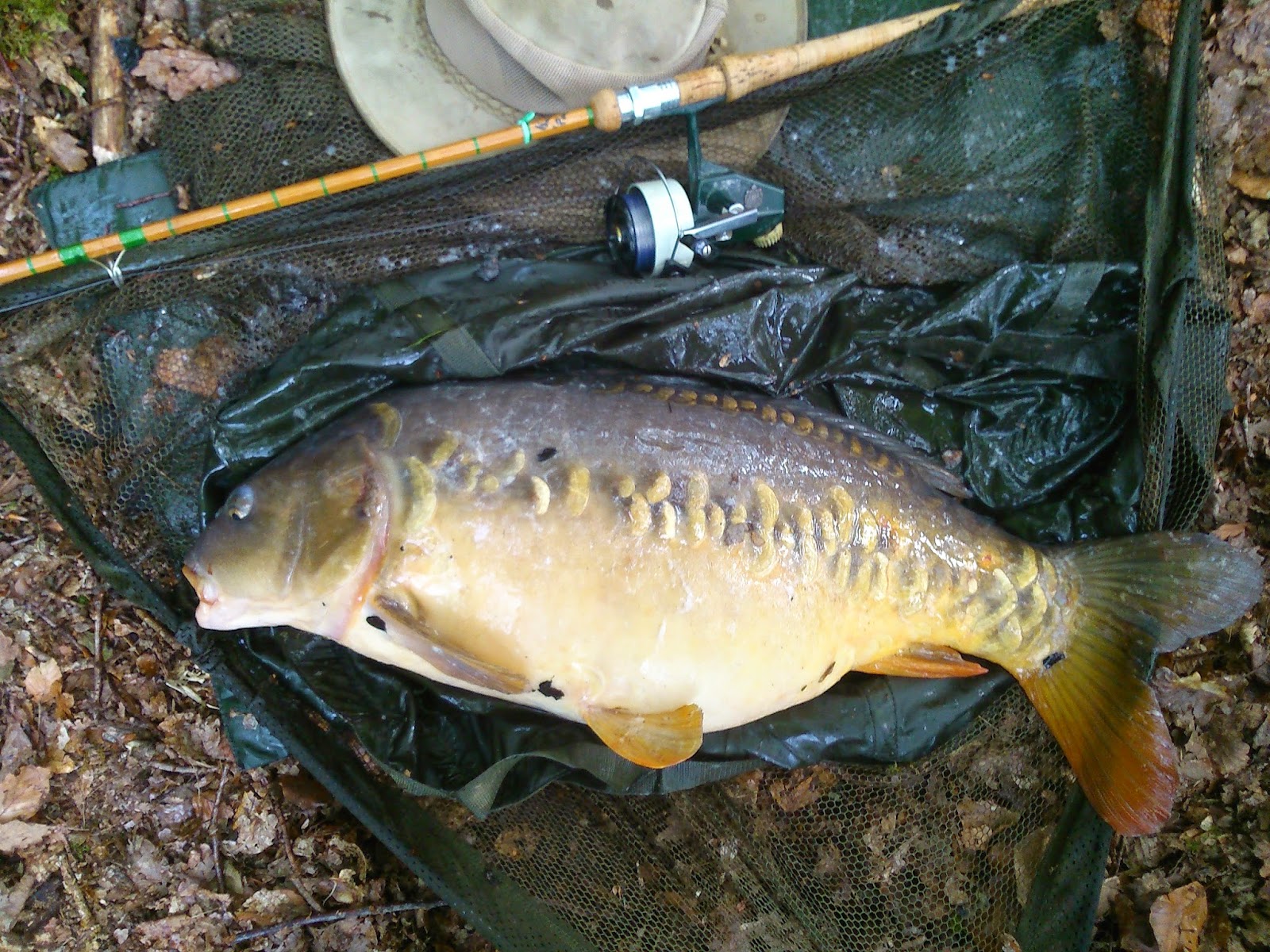 Two days coming, two days there and two days going, that's how colds used to be described. What was it my Gran would say? Treat a cold and it'll last a week, leave it untreated and it'll last seven days. So when did all that stop?

I've been under the weather - did you guess? I was talking to Neil about the above and was saying that nobody has 'colds' any more, we all have viruses and they seem to be getting worse. He said it sounded like the ramblings of a mad man but when I went to the doctor (as I was actually wheezing, something I've never done), he said "Nothing I can do, just get over it...... It'll take three to four weeks" How long? Give me an old fashion cold any day.

All this waffling goes some way to explain my late return to the lake after my recent success, in short I've been like a caged bear with a sore head that's just stubbed his toe.

Not really up to a day wandering around the Redditch Tackle Fair I decided I may as well lay about and moan next to the lake as at home. Setting up was exhausting and I had a very early night with just an abortive bream pull before dark. Come dawn and I was woken by the bird's fanfare to the day but again, I soon drifted off again. Then, at 6:20 a single bleep had me sat looking out of the open door as I scrambled to put my shoes on. I watched the indicator gently rise and keep going, the line trickled out at a very leisurely pace and as I put my hand over the spool and tightened to what I felt must surely be a bream but no, the rod relayed messages of weight and the battle was on.

Once more the fight was a dour affair until it saw the net but I never felt the issue was in any doubt and soon another lump settled in the mesh. I did a quick weigh and realised that the fish was rather familiar to me, it was one that I caught on my last visit. This in itself is not totally unknown but Neil had fished this swim a couple of days before (which is why I was so eager to get in it) and had taken a couple of twenty pounders, one of which he had taken on his previous visit. So we can probably deduce that there's a shoal of fish moving around together that Neil encourages to feed, catches a fine but smaller fish or two then hands over to his dad to take a lump. Am I complaining? Am I buggery. 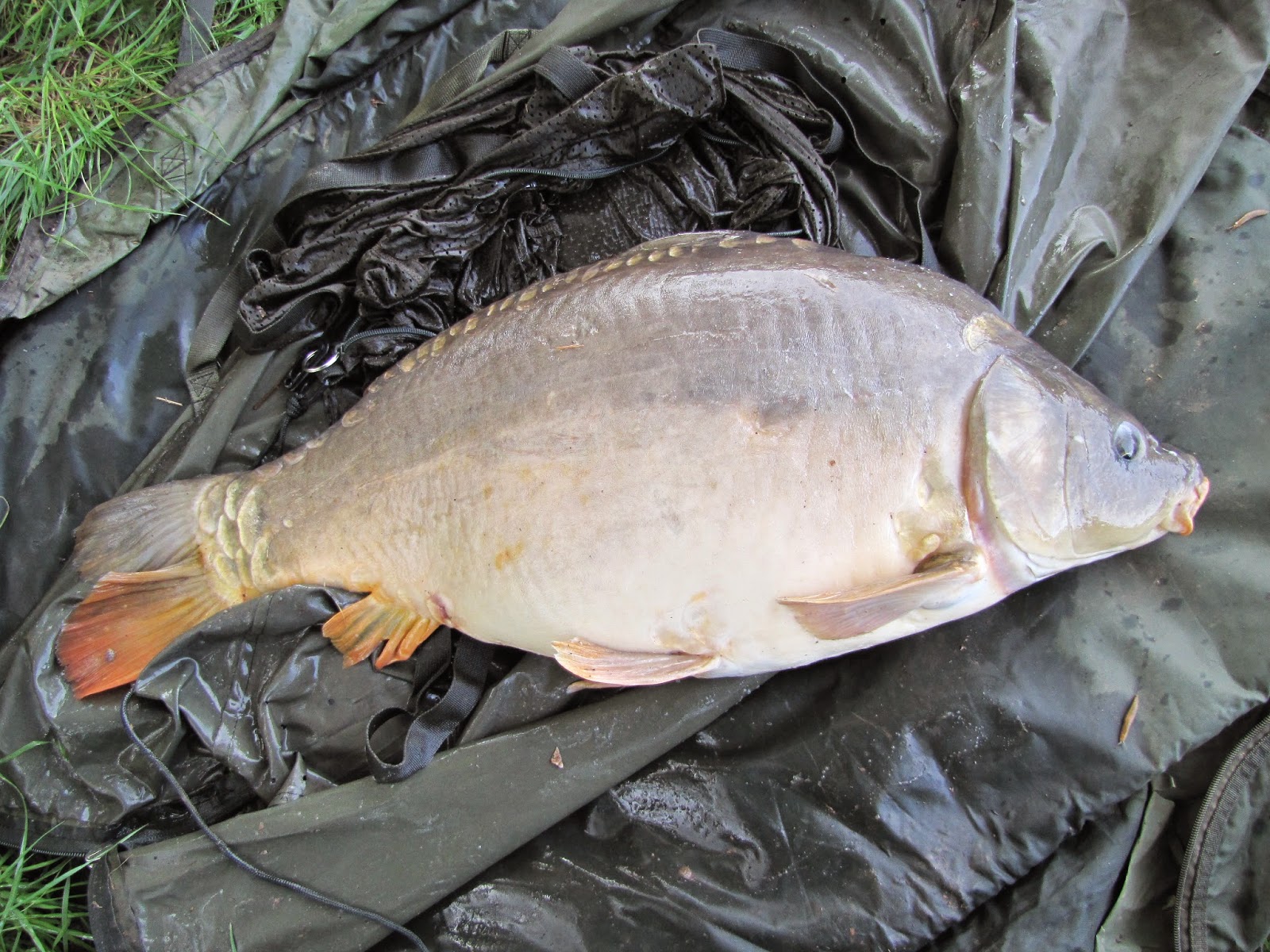 I only took a quick snap on the mat for two reasons, first it woke up and put up far more of a scrap on the bank than it ever did in the water and second, I'd taken a picture of it two weeks ago. It was only after it went back did I realise that when I'd pictured it last time it was also just a snap on the mat. Hey ho, I'll just have to catch it again.

I was set for a day of rest but a slight emergency at home had me packing up and returning. Emergency duly sorted I went to take Harvey for a walk but he did not want to go in fact he hadn't even acknowledged my return. Poor old Harv he's been really under the weather for a couple of months and has recently been off his food and his gums have become ever more pale showing all the signs of cancer. Just like Buddy we had all the blood tests done and they all came back okay and just like Buddy, a couple of weeks later and he'd had enough. This evening we had Harvey put to sleep as the vet agreed it was the only option.

We only had Harvey for two years yet it feels like so much longer, he was such a character, loved by many in the village he literally did, on a few occasions, stop the traffic as people pulled over just to come and say hello. He will be deeply missed. 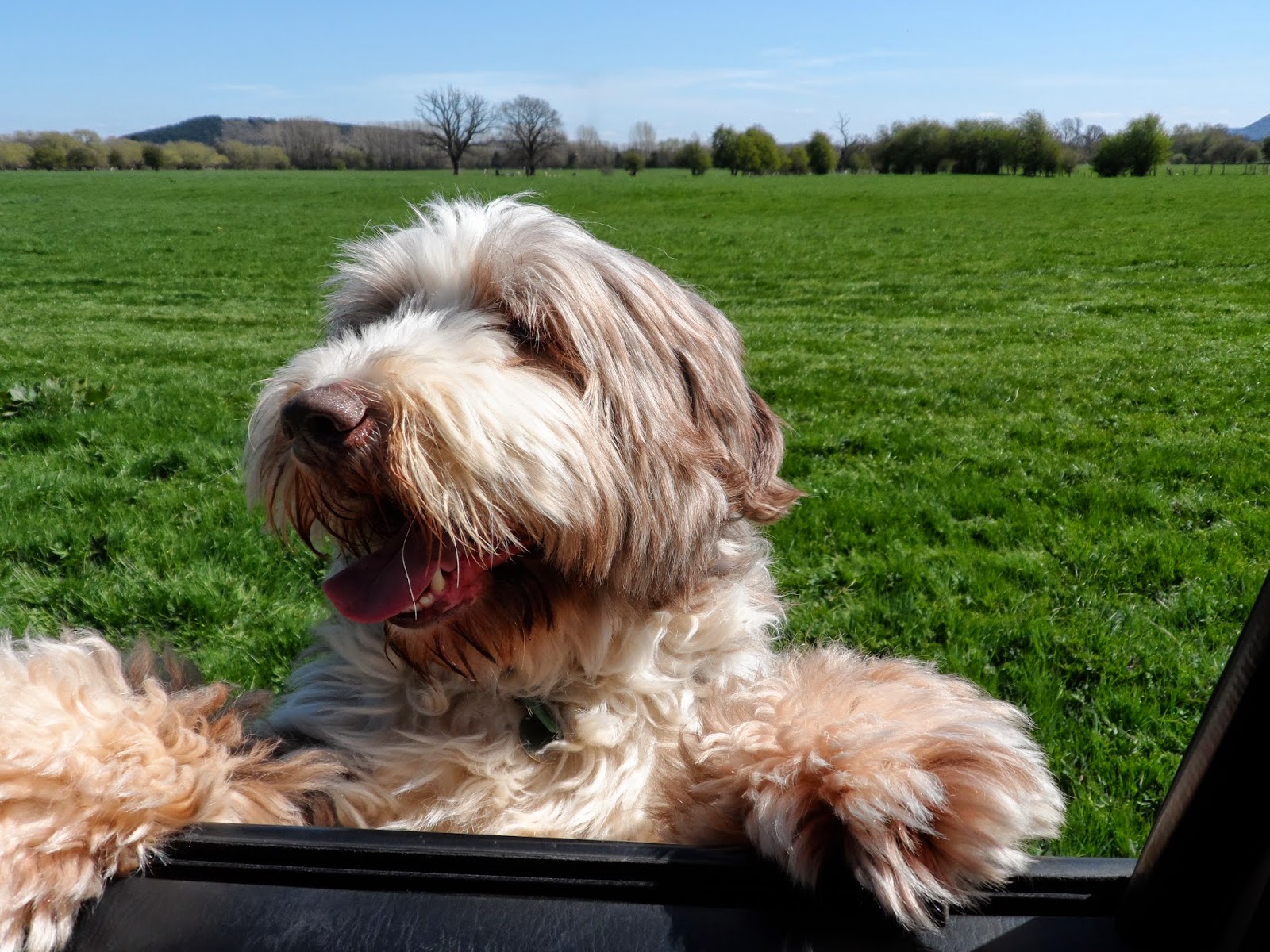