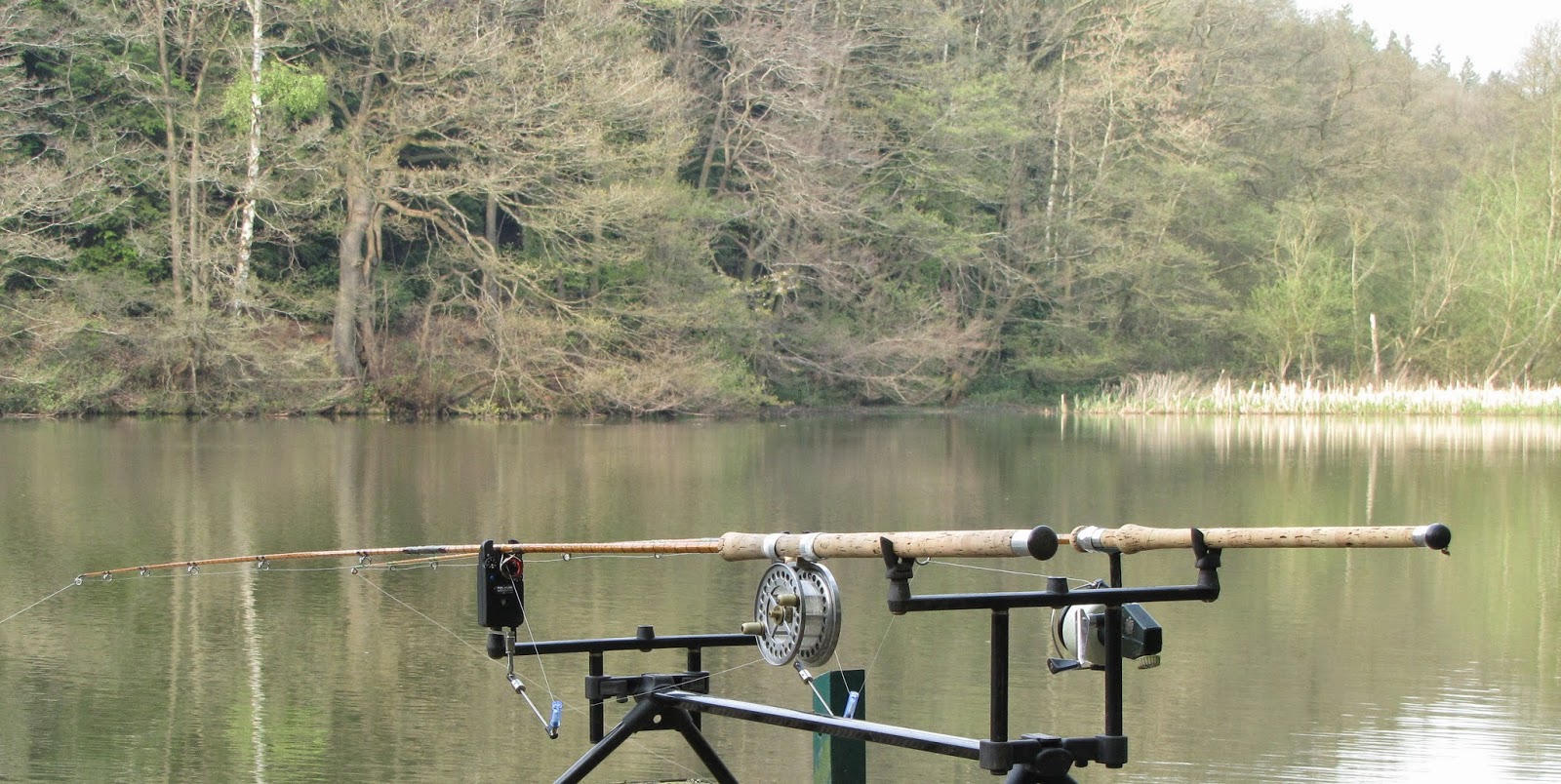 There are still those that give a "Harrumph" at the mention of fishing during the old Close Season indeed, for a while, I was one of them. That was until I discovered two things, the first being my renewed desire to catch carp.

It is that pursuit that has brought me via a twisting path to my present syndicate lake. A venue that I value as high as any fishery I've ever visited and where I have realised my dream to catch a UK thirty pounder. That the fish are fast growing and relatively young is a negative, I'd much rather be chasing old Leney's but there's only so many 'old' fish to go around and amongst the newer fish here some old codgers do still swim. I just look at it that you can only fish for what is out there and I do just that.

My second reason for enjoying being lakeside in the Spring is simply the Dawn Chorus. I've heard countless choruses over the years, shift work will do that for you but to be woken at dawn by this magnificent display is surely one of the greatest free shows available. Those that venture out on those mid-June days have missed the very best of it and it is well worth making the effort to witness the event in late April or May.

At just after 5am I heard the first stir of a thrush not four feet from me.  Sounding like a broody hen I'd listened to its little clucks and chirrs during the night. I could not find a nest so assume it was merely perched on the lower holly branches with its mate but come the dawn he cleared his throat and let fly. As his repeated calls grew so his assent of the tree continued until he was on his favourite perch, the spot where he had sung all evening and the world was told of his very existence. This sparked a wave reaction and within a few minutes every song bird in the wood was competing to declare their territory and their amour. I lay in my bivvy listening, trying to identify the individual protagonists the flowing chorus was disturbed by a rude interruption - a man made sound - my bite alarm!

Throwing back the sleeping bag and trying blindly to put the old routine in place I found myself with size 18 feet attempting to put on size 6 shoes. The pure panic of a 'bivvy take' is electrifying and one of the most exciting events in fishing, it certainly gets the juices flowing at such an ungodly hour.

As I flew through the already unzipped door of my shelter I was aware of a back note to the warble of the Delkim. There was a grating zzzzz, zzzzzz as my eighty year old Hodder centre pin reluctantly yielded line to a running fish. It was attached to a rod of unknown origin but which doubtless began life as a salmon spinning rod. At eight feet long, beautifully put together and with a very pleasing action, this was the first fish I have contacted on it. I instantly lodged it as a favourite and a definite 'keeper'. The bend was not too dramatic and the fish merely plodded out into open water where it allowed me to steer it at will. I was beginning to suspect an enormous bream had fooled me but a sudden change of direction and a deliberate run left me in no doubt that I was in contact with my chosen species.

The battle continued for several minutes in the grey light of dawn. I allowed myself a little look around as the world slowly woke around me and the glass still lake rocked when the bulk of the fish altered course. I had to steel myself as I was already wondering how big it might be, "Get it in the net first" I chided myself, "Remember Neil lost two at the net the other day, it ain't over till the net's lifted".

A broad back rose next to me, I dared to keep it coming up and lifted its head from the water, the fish lolled onto its side and I slipped it into my big net - then I breathed an enormous sigh. 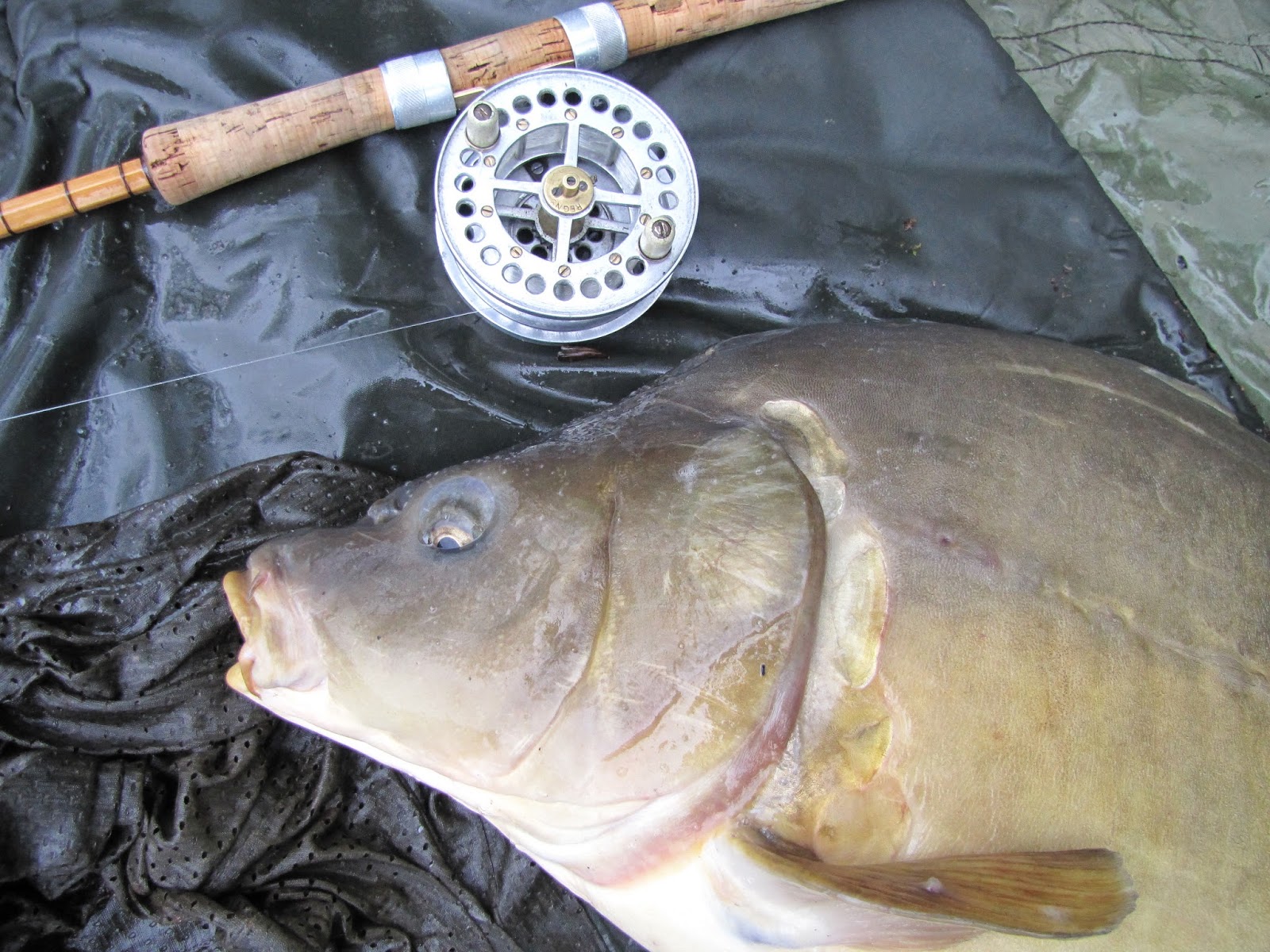 Fully awake I went into auto pilot and leaving the fish in the secured net, set about preparing the unhooking mat, weigh sling, scales etc. All that done I stood and took in the scene for a moment noting that the birds were still singing and my actions were all but ignored by every other creature on the planet. I embraced the solitude then went to meet my latest guest.

It was a fat brute of a carp weighing 28lbs 9oz. Not the best looking fish in the world but it would do me. Oddly, Neil and I fish here together and to date have enjoyed a similar catch rate. All bar one or two of his fish have had really nice scale patterns yet all bar the same number of mine have been near leathers and, let's face it, unattractive. There's no explaining it of course, its just one of those things. 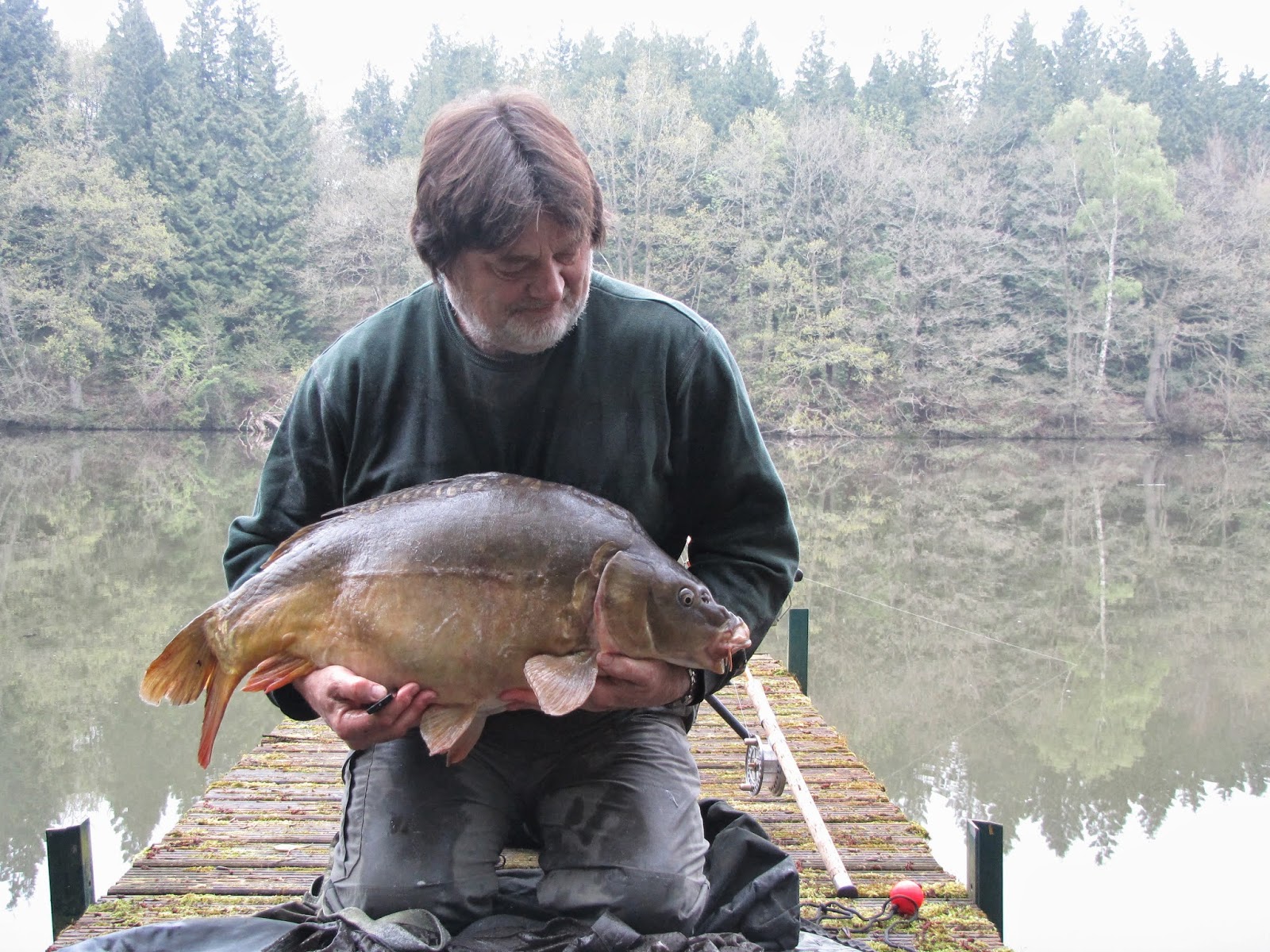 I spent the day keeping low and quiet. I did not expect daytime action at this time of the year but I wanted to blend into the surroundings so that any cruising fish may not notice me. I had many songbirds land within a few feet of me as I read and dozed indeed one blackbird flew directly at me to a point where I flinched and he put the last minute brakes on.

Dusk settled, the thrush had not long left his high perch and the bats had taken over the sky. Despite the chilly breeze that had been blowing earlier it felt mild and calm. Once again a strident blast of noise and a flashing LED had me scurrying forward to my rods. This time it was a refurbished Hardy LRH that took on the fighting curve whilst the ABU Cardinal's clutch begrudgingly allowed line to flow. Again there were no fireworks in the early stages of the fight, I figure the fish are still cold and sleepy as fish hooked in the summer here tend to rip your arm off at the shoulder. I was again uncertain of it's weight but was satisfied it was around the twenty mark. I had it coming in nicely and dipped the net to greet it when it went through a belligerent stage of wanting to do the opposite of my suggestions. There followed some heave ho and the rod, which again was landing its first fish for me, performed with aplomb and, at last, the net was lifted. I had a peak at the fish and smiled, another whopper.

It was almost dark so I just took a couple of shots on the mat rather than faff about with self takes or sacking the fish. I put a number on it at 28.15 and slipped it back for another day.

I slept soundly until the dawn when the birds once again began their routine and I drifted back to sleep to nature's musical accompaniment. 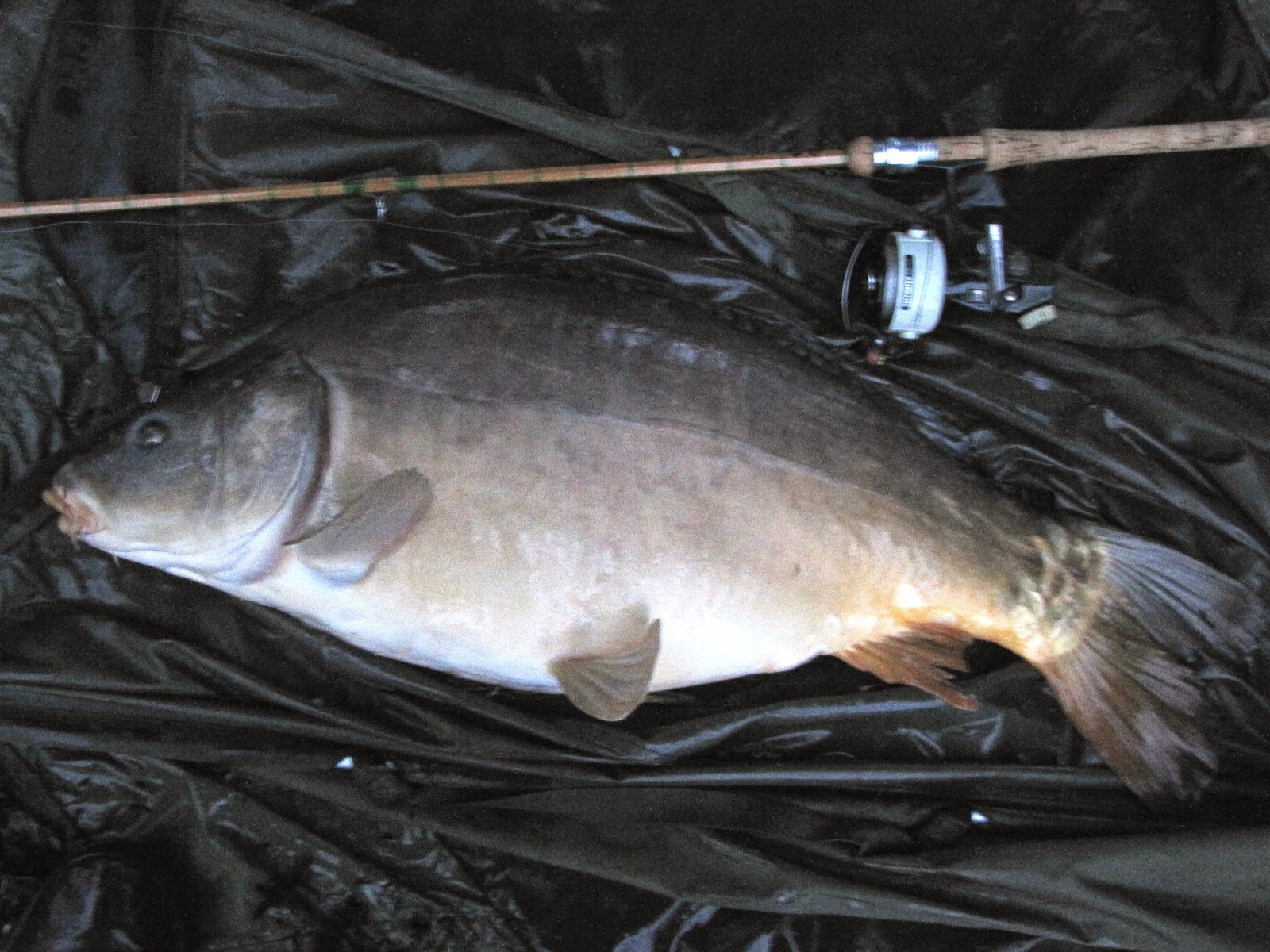 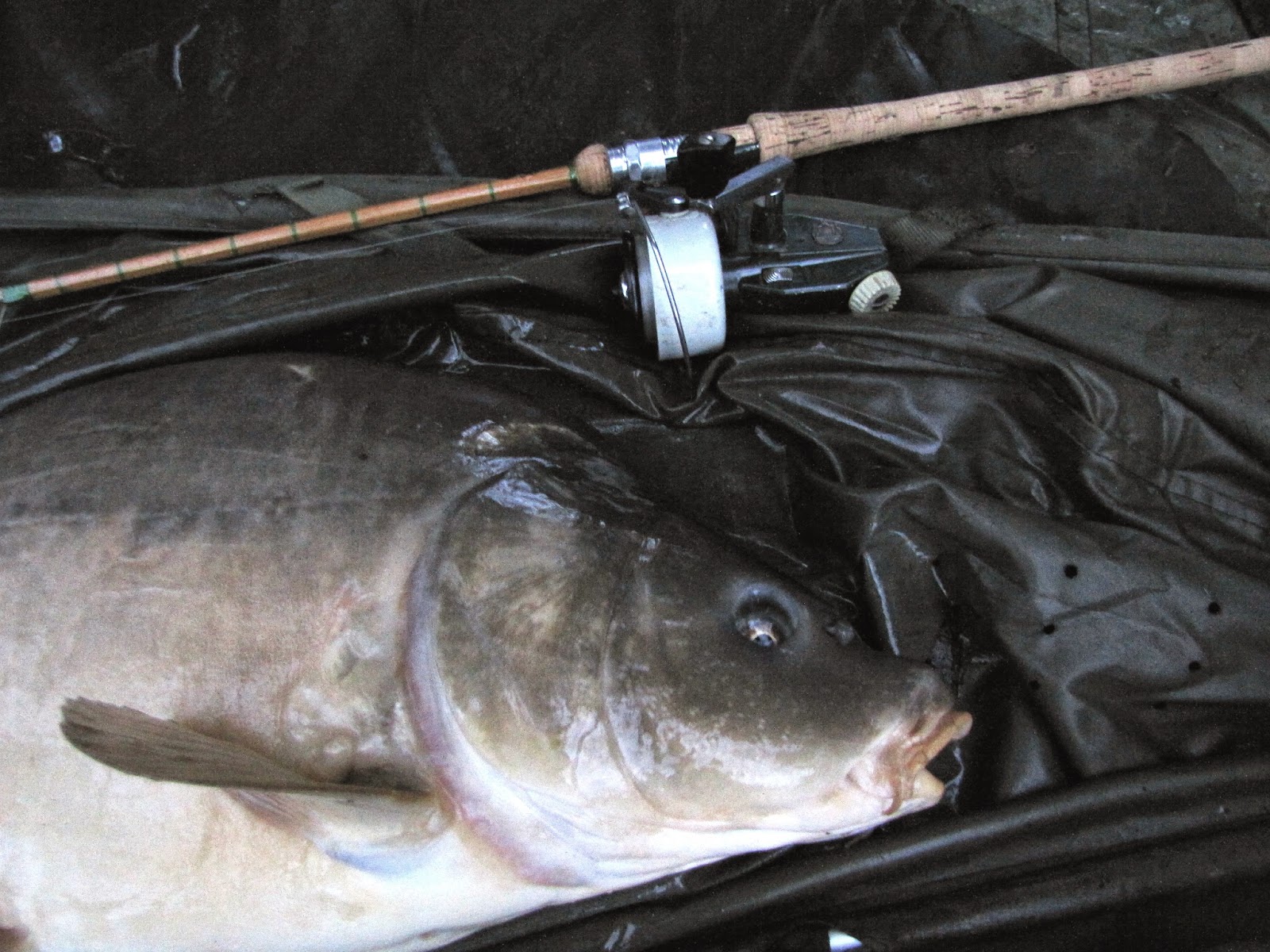