Sunday evening saw me joining the Wye Barbel Botherers in their accommodation near Ross on Wye. I've known Mike Perry and his gathering of reprobates for several years having guided them a few times. I am invited to join them on the banks each time they holiday here but this time I was staying overnight for a social


It was a real bonus that Dave Steuart was also their guest.  He fishes the Wye Lea stretch (where they were based for the week), each year as he knows the owner well. I think Dave's about 270 years old now but he still has a mighty passion for fishing.

The evening meal was good, the alcohol flowed, Trevor kept falling asleep, Jerry forgot how to climb stairs and the rest of us laughed a lot.

At 3am, both Dave and I (we were sharing a room), had to visit the little boys room. Dave then started chatting and chatting.... I love Dave and feel honoured to call him a friend but, after half an hour or so, I had to tell him to shut up and go to sleep.

All bar Jerry made breakfast and set off to the river full of optimism. I selected the nearest swim to the car and spent the morning losing tackle in the rocks around the old bridge. It was like casting into a dragon's mouth. Hit the sweet spot and feel the feeder hit bottom, a bite would occur within seconds as the fish swept in to grab it's contents. Leave it any longer and your line fell between the teeth of the mighty beast and a breakage was all but inevitable. 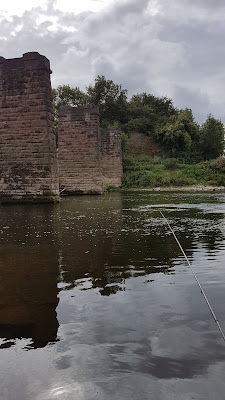 It was full-on fishing and a lot of work. I landed a few chub and a couple of small barbel, I also lost two more barbel when the hooklink parted as they got amongst the rocks. It's one of those suicide swims where you have to risk tackle and fish losses because it's stuffed with fish. There's no way of getting above them and, due to the low conditions, they were reluctant to drop back. 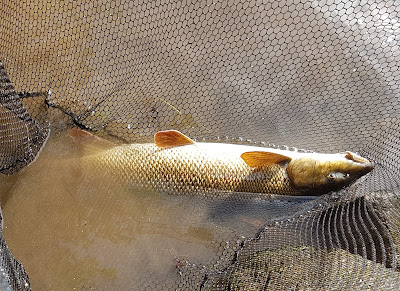 I broke off for lunch and decided it was too much like hard work and I was unhappy about the risk to the fish. I cast below the action area and managed a final chub before leaving the swim and my fishing friends who went on to have a successful week. 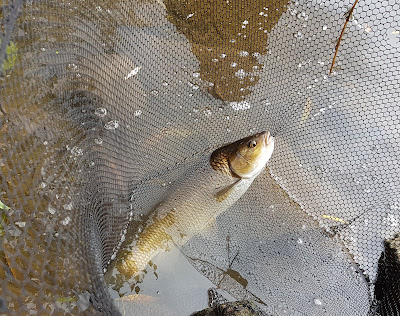 The usual suspects - survivors from many a lost weekend, had not gathered for a full five years. Speckie suggested a re-gathering..... and didn't attend. No further comment on that.

The more stalwart members of the crew duly drifted onto the fishery on Friday and found the going tough.

I sat with Carl on beat 6 and despite our best efforts, I caught the only fish, a chub that took a small piece of meat well away from my feed. I think just one barbel succumbed on the day and prospects looked grim. 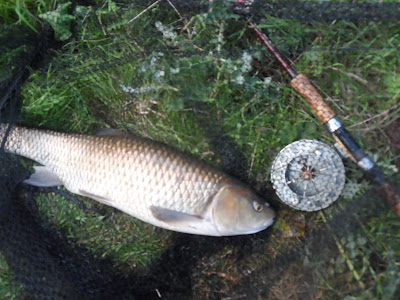 The evening went well and we all set off hoping for the best. Carl dropped some bait in a swim, collected his gear from the van and had a barbel first drop. Ian fished over yesterday's bait and also had one within seconds of putting his rod down. Later in the day my lad joined in and he also took a barbel on his first cast, again very quickly. It was very different from the previous day. 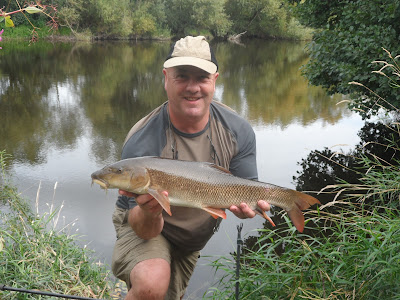 I decided (retrospectively) that I was chub fishing. My first swim option was uncomfortable and failed to inspire me so I moved to pastures new and took eight chub - but no barbel.

We debriefed later and I think everybody else had taken at least one barbel. Carl had three, Ian five! I reckon I have lost my touch. Never mind, it was all good fun.

An our last gathering a prestigious prize was awarded for the 'most significant' fish. A tasteful painting of otters was awarded to Carl and he returned it this time hoping sincerely that somebody else would have to find space for it. Mind you, he'd kept it in his garage - the heathen.

Who would take it home this time? Paul for his nine pounder? Ian for his five fish? Tony for his barbel on worm in a snaggy spot? The drums rolled..... decision time loomed.... and the winer is..... Carl! For recapturing the chub he'd lost in the morning and removing both hooks from its mouth. His acceptance speech was a long groan, drowned out by laughter. Well it was always going to be Carl..... but don't tell him ;o)