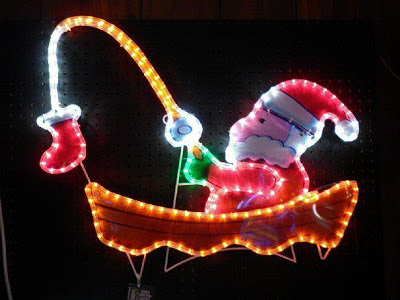 I'm not a total Grinch when it comes to the Santa Season, I'm just a tad cynical about the 'in your face' aspect of commercialisation. I hate having people shouting at me from the radio, TV or computer  and telling me to buy this, that or the other and that without the latest (insert name here) I'm a nobody and women won't want to touch my trousers.

I'm actually feeling quite Christmassy this year and have bought my best woman some gifts I just hope that Nicky doesn't find out - Ba Bump Tish! All is ready for the big day so there's no need for a last minute dash to the shops although I hear murmurs of a visit to the supermarket to see if there's any bargains though I feel it is more to sneer at the desperate 'leave it to the last minute brigade'. Oh well, I'll  tag along and grab a few liquid essentials.

Its been a funny old year in a totally non humorous sort of a way. The weather has been atrocious and it continues to rain but then I expect you've noticed that. I had all sorts of fishy plans for the year and most of them were abandoned due to the high water levels but I never really got my high-water head on and chose alternatives. Ah well, try again next year, it is only fishing after all. 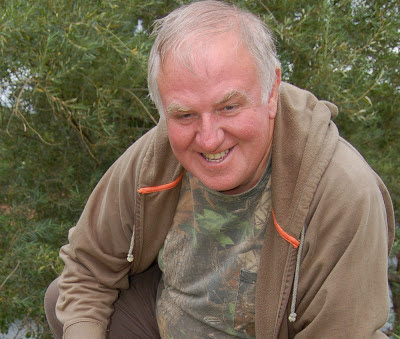 Anyway, the best bit of news I can pass on is the remarkable road to recovery of my old mate Dave Mason. Many of you will know Dave, a big name in the barbel world and a proper fisherman. He had a massive stroke back at the start of the year and we all feared the worse, further complications left many of us thinking we would lose him and even that it may be 'kinder' if he just slipped away. But they make 'em tough in Oldham and few are tougher or more determined than Mase, he ignored all of the negative and decided to get back to the river bank as soon as possible.

I spoke to him a day or two back and, although his speech is still affected, we chatted for ages. He is a dogged old cuss and is walking short distances without a stick and is heading, according to the bemused medical services, toward an almost complete recovery by the end of 2013. Dave is hoping to have a week or so on the Wye in the summer and many of us will be delighted to see him with a rod in his hand once more.

Happy Christmas to you all, thanks for dropping by and here's to a great and hopefully dryer 2013. 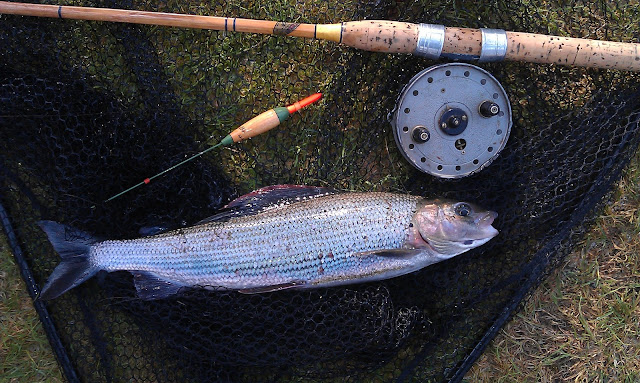 I grew up fishing weir pools and its something that has never lost its appeal. Today I sat beside a very small weir situated on the river Test and the memories came flooding back.

Neil and I stayed in a pub overnight then set off in the frost to Dave Steuart's section of river for my annual day of pure fishing hedonism. The mist rolled off the water as we arrived giving the river an alluring atmosphere, we were eager to start but this is not a place to hurry. A drink and a long chat with Dave was the usual start to the day. When we finally began sorting our gear from the car Neil said "I could listen to Dave chat all day" which we all could but there was fishing to be done and given half a chance Dave would have carried on talking - trust me :-)

We decided to fish with cane rods, I was keen to get a bend in my Lucky Strike which I coupled with a Speedia that was owned by Peter Stone (name dropper) and Neil was using a Sabrina with his Adcock Stanton. I fully expected to give in and go over to carbon when the shoulder began to ache but we both stuck it out for the duration.

The river was going through at a fast pace as a few of the sluices were open and there was a fair amount of debris coming through, this coupled with the sudden drop in temperature meant that the fishing was going to be challenging but we were undeterred. We headed to the bottom of the fishery where I settled in by the little weir whilst Neil went to the opposite bank and fished below the main sluice, he hit and landed a trout of well over 3lbs first cast.

In front of me the current was all over the place as water hit the pool from several angles, I know the swim well and let the float explore for a while as I got used to the extra water. I hit something heavy that plodded about before slowly rising to the surface, it was a big grayling but it was hooked in the pelvic fin - then it fell off.

I lost a small trout before landing my first fish, another trout. Then it started to come together, the feeding was working and I began catching a succession of graying most of which were a pound plus and which fought hard in the boiling current.

Then it got to that stage. I became absorbed by the roar of the water and the hypnotic movement of the current, my world condensed into that few square yards of water and I was no longer looking on but part of that tiny microcosm. I knew where the float would dance to next, I read its movements, never deceived by the bottom or the current pulling it under but hypersensitive and alert for the animal movement of a bite. It dipped - I struck before the tip buried below the surface and again the rod bucked and bounced to the distinctive writhing action of a fighting grayling. I was in my element and loving it until Neil appeared at my shoulder and spoke making me jump out of my skin as I plummeted back to the real world. 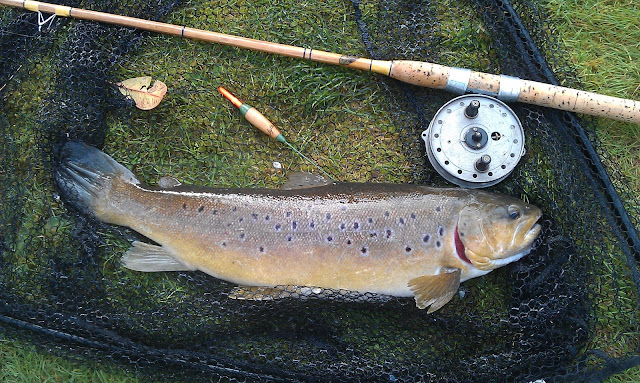 We moved about and tried a few more swims catching in all of them, Neil even took his first ever salmon, okay it was only a few pounds, out of season and on maggot but he was well chuffed. We ended up where we began and for a while we even swapped swims and rods and still we caught. Yes, its easy there but what the hell, I love it.

The day ended when we were caught in a heavy shower and both agreed that we'd caught enough so it was back the house and another chin wag over a cuppa before the long drive home. 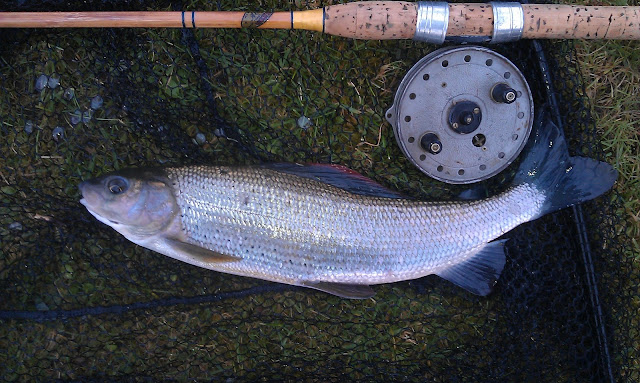