I haven't fished the river for several weeks due to a severe bout of Man Flu.  Frustrated and searching for positives out of a lot of negatives, I set my heart on some carp fishing that may well be the mainstay of my autumn activities. I began plotting and buying the necessary bits and pieces like hooks, line, swivels and other assorted items of end tackle... oh, and three rods. They were second hand but as they are Harrison Ballista's - custom made - and 2.5 TC well, I'm only flesh and blood.

Nicky was constantly telling me I was still 'grounded' and, as I was asleep most of the day and unsteady on my feet due to the virus, I kind of agreed. But come mid-week I felt well enough to go and Neil - bless him - came too and helped carry my gear to the pitch.

Due to one other angler on the lake occupying my preferred spot, I chose to fish a swim I've never really scored in before but it 'felt' right. It's a long chuck swim (for me), all 80 yards of it, but I could pop around the far side and bait accurately. It took me hours and I mean hours to get everything sorted but, at last, two rods were out and I was in relax mode.

Neil's voice wafted across the pitch but I realised it was the walkie talkie. He'd landed a fish. I reeled in and drove up to his swim where he displayed a high shouldered brute of 25.8. We were both delighted and I went back and recast. 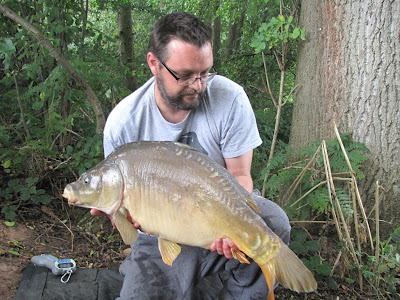 Early evening and I receive a text saying I have two voicemail messages - that is rarely good news and with my mother quite ill in the nursing home, I went searching for enough signal for a call. Up a long hill I eventually found a minimal single bar and made the call, one was an old message, the other from Les who I was to meet on Friday. Phew!

I rang Les and explained that I may have to cut him off if I lose signal or get a bite, "Highly unlikely" I offered. But a bleep from the remote sounder box and "Ooer" says Les. "Bream" says I. There then followed a single tone run that had me running, or as near as I can get to it, back to my gear and my first fish on the new rods was on.

There followed one of the best scraps I've had from a carp, it was a real battler. Neil arrived to net it and there was my prize - 30.6 Happy days. 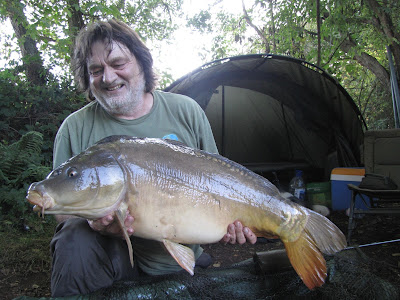 Another recent purchase is a Trakker inflatable mattress for the bedchair. What a brilliant device, what a great night's sleep, helped by the distinct lack of fish action. But, come 6am and I was off again. 20.6. I stood looking out over the lake. It was chilly and the wisps of mist raced up and down and all was well in my world. A coffee and a warm in the bag was again disturbed by a 19.6. Isn't that odd? All of them were six ounces over the pound.

Suffice to say, I am planning a return visit very soon.
Posted by Dave Burr at 21:09 2 comments: