On arriving at our destination in deepest Spain, Nicky and I walked out onto the bridge for a quick look at the river. We were accompanied by hundreds of martins and alpine swifts each swerving and diving to catch the myriad of fly life that swarmed over the placid water. They should have tried the flat, there was enough flies there to keep a family of swifts going for a few days :-) Not really, Hobby did some excellent Ninja maggot hunting and only a handful escaped his highly tunes skills, these were dispatched with a few well aimed swipes of the Carpworld magazine.

Anyway, back to the bridge and, as my eyes grew accustomed to the light conditions, I spotted a few small barbel drifting here and there then, suddenly, at the tail end of a pool, a shoal of at least thirty fish drifted into view. A very welcoming sight.

The flat was bigger than I expected, Tony's got himself a brilliant bolt hole hear and we quickly settled in.

Day one was spent sorting bait and provisions as well as a drive to one or two spots on the river to get my bearings, with the afternoon temperature topping 30C there was little point in rushing anywhere.

On Friday we went to the weir, a beautiful fishing location that, were it in England, would have queues of people waiting to fish it. I started catching almost straight away and, after two double hook ups, used just a single rod. I couldn't sort out any of the bigger fish, just loads of little fella's the males of which were in full spawning colours.

Find of the day was a diminutive turtle that was waddling about in the shallows, his shell was the size of a 50p - very cute. 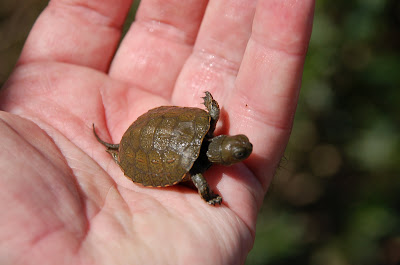 After a dozen or more fish I started to wane. The sun was beating down and the car gauge showed 32.5C when we left.

We were there to sightsee as much as anything and Saturday was taken up with a long drive around the two large reservoirs through a spectacular and varied scenery. We saw plenty of bird life including rare Egyptian vultures.

A stop at one dam revealed some carp. "Go on then", I said to Nicky, "You've seen plenty of carp, how big do you reckon these are?" She paused and gave a considered reply "They're 'kin huge!" I couldn't argue with that, they were. 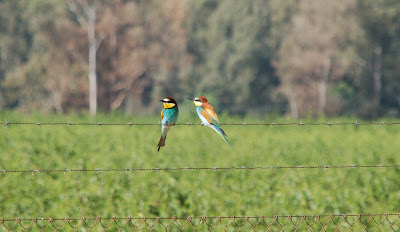 I only fished for an hour and a half on the Sunday, it was at a spot where I blanked last year (despite assurances as to it's abundance of fish) and I again went biteless. I was not feeling too special so returned to Castle de Tony and fully embraced the local custom of siesta.

It was now Monday and time had passed quickly. We went to an area of the river where matches are held and where, unusually, the fish are used to angler's baits. Within a few minutes of introducing a pint of maggots I was getting bites. I had a few small barbel but the rest were from an annoying little carp that has no doubt been introduced to bolster match weights. These things are small - pasty sized - don't fight very well and greedy. After about fifteen of them, one small common and the barbel, I left. I'd not been there two hours. 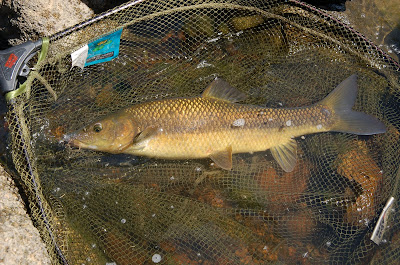 We went back to the weir and I had another half dozen barbel up to about 4lbs. No Comizo's this time but one or two of the fish showed that beautiful two tone effect of the Andalucia strain, not as orange as the fish from the south but some bright yellows - nice.

Last day and another drive to catch the scenery. Again, we saw birds aplenty including Spanish Imperial Eagle and we had to swerve around a snake. Off one of the dams we saw hundreds of small carp basking and sipping in flies and some locals catching good sized bass on lures, the potential in some of these waters is incredible.

Wednesday came all too soon and the long drive up to Madrid felt like a real chore. It was a glorious week, cloudless skies, plenty of fish and loads more to see and enjoy. I must say a massive thank you to Tonio for the use of his place and thanks to Faye for the loan of her pajamas...................... not really :-) 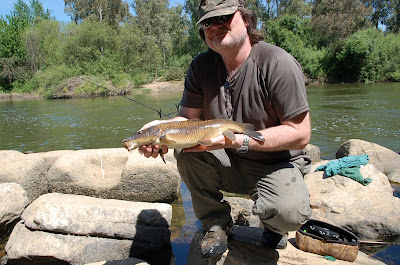 Did any of you spot the deliberate mistake? One clever little boy did and has informed me that the fish pictured at the bottom is indeed a small Comizo. Well done Leo but no prizes available on this occasion. I am amazed that such small Comizo's were frantically spawning, I assumed that they would wait until they were a little older but hey, the warm Spanish air, a glass of Rioja and if the mood takes you....
Posted by Dave Burr at 14:41