When I arrived at my secret lake (shhhh!), I had a feeling of trepidation. Would it live up to my expectations? Was it all show but with a hidden flaw - like admiring a beautiful girl only to find she has an Essex accent?

It was blustery and my six month absence from a carp water was apparent from the off as I made a complete mess of everything. I moved from my first choice swim to a point where the lake narrows. I have seen plenty of fish basking on both sides here and I also expected cruisers to visit morning and night to feed on the stream bed. Plus, it meant some shorter casts which, in a swirling wind, was a bonus.

I took ages to get sorted but eventually had three rods sensibly placed to cover fish moving or browsing. I sat back and relaxed only to be rudely awoken by a run! I made a complete hash of it and brought back a straightened hook. That wasn't in the plan.

Nick and Neil came out for a picnic and, as Nick and I sat in the sun, Neil went fish spotting and assured me that there were fish quite close to my bait. When they departed I had the place to myself - no road noise, no voices, just me, the birds and the wind above - bliss. 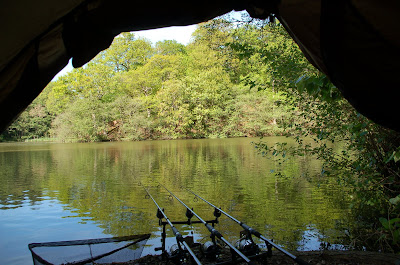 It got chilly but, due to the snug nature of my swim, my rod butts meant I couldn't close the bivvy door. I led there, in my bag, dozing when, at about half ten - beeeeeeep! I was away on the middle rod but, as I lifted into the fish, my right hand rod was away as well and gaining pace. This was hectic enough but to add to the confusion, my head torch was shining directly into my eyes. Not quite understanding what was happening I lifted the bit that aims the beam but it fell back and blinded my left eye. Was it on upside down? I changed it but to no avail. I had tightened down on the running fish to stop an overrun and bent into the distant fish which promptly fell off. Oh well, still got a smoking reel so I lifted into the other rod and pulled.... into nothing!

I sat down, my swim a war zone. The head torch had broken and was hanging by a wire. Luckily I carry a spare so that was job number one, to swap the batteries then get everything back how it should be.

I was jolted from a cold night's sleep by an alarm at 3ish and landed a bream. Not what I wanted but a start. Soon after, the nearside rod shot off and I landed a very hard fighting mirror of 20.7. Not a bad opener. I was ecstatic and losing another fish later on didn't lower my mood. 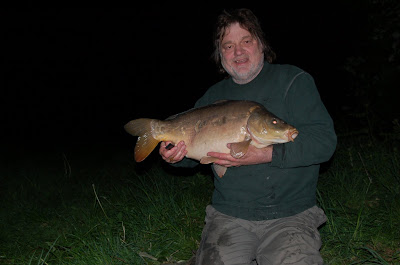 The second day was quiet but I spent it reading, dozing or watching the lake like you do. It got cold in the shade so I sat up in the sun behind my swim and threw a stick for Buddy. I had a run, again on the right hand rod. This one also fought hard and was another mirror of 22.4 - Fantastic!

I decided to eat some tea and listen to the footie so, at 7.15 my ravioli has just got to the switch off point when, off went the left hand rod. Again, I was beaten up my a scrappy fish which, miraculously, went 22.14! Am I dreaming? Three twenties!! Reheated ravioli tastes great in some circumstances.

It was really cold at night and I didn't really want to be disturbed, a good sleep would go down well but alas, it was not to be and I had to climb out into the chill, dressed in pants and T shirt, to land yet another fish. It was 3am and the fish came in doggedly . I was shivering when it rolled, at last, over the net. What a brute - 25.9 and a glorious specimen. I rattled off a quick picture and slipped it back. Leaving that rod on the rest I jumped back into my bag and shivered some more.

At about six, with mist rolling across the water, I had my last run, a 'tiddler' of about ten or twelve pounds. What a session, four twenties, five carp for over a hundred pounds. Pinch me, I think I'm still asleep! 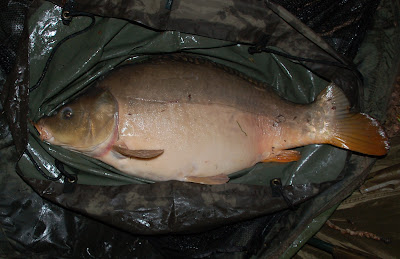 25.9
The only hiccup was the remote on my camera gave up the ghost so I've only got a couple of terrible snaps of the first fish and just unhooking mat shots of the rest but who cares, I've had the trip of my life on the loveliest lake I've ever fished.

To add to the sense of elation, I was on a new bait that seems to be of liking to carp, another lad on it had five twenties from another water. The success of the bait will add to my confidence as I'm taking a load of it to France next week for a go on the river Seine with the Bunyans. I've set the bar quite high but confidence is a vital a ingredient and today, I have it in spades.
Posted by Dave Burr at 12:58