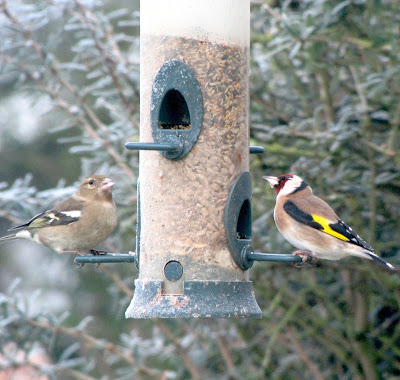 
I used to fancy the idea of being a wildlife photographer. In my twenties and early thirties I spent a lot of time chasing butterflies - literally not metaphorically - and collected a bundle of photographs of most of the species the UK has to offer. Snakes and lizards were my other passion and me, Chris and Paddy used to set off to some far flung area in search of them. This led to an incident in an area of sand dunes where Chris and I were searching for Smooth Snakes only to find it was the gathering point for large numbers of gay naturists, we found plenty of smooth snakes all right but none that I felt the urge to photograph.

Which brings me to this morning - no, its nothing to do with smooth snakes - I've been trying to get a picture of a brambling. We've always fed the birds, it used to be a bag of loose peanuts from the local shop but over the years this has escalated somewhat. A van left a delivery the other day which consisted of over 50kgs of various seed mixes and Nicky found some reduced items in a pet shop which have been added to it. The old song from Mary Poppins went along the lines of "Feed the birds tuppence a bag" well that song has failed to keep track with inflation.

We pay a little more for sunflower hearts and a 'no mess' seed mix which really does help to keep the garden free from a thick layer of rotting husks and this is much healthier for the birds themselves. The birds seem to appreciate it too, for a small, suburban garden we have an excellent variety of bird visitors but being so close to the countryside helps. 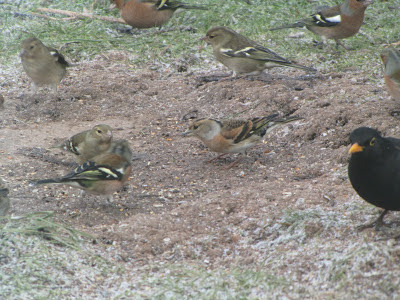 Brambling between the chaffinches 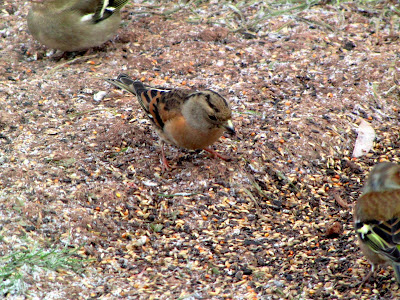 Brambling
For the last four or five winters we have been visited by bramblings and they are a big favourite. I'd only ever seen one brambling before many, many years ago on a trip to the seaside, of course nobody believed me but as a youngster I was a mad keen birder and I know what I saw. But when we had five or six of them in the garden I was delighted and they've been back ever since. Blackcaps are another winter feeder but only ever on the feeders in the back garden. Last night with the temperature plummeting, it has brought our first blackcap of the winter. 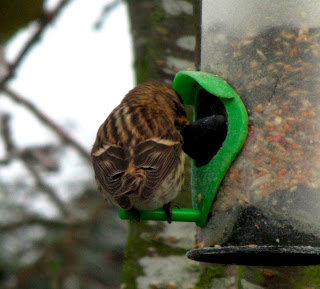 Back view of a Redpoll
Whilst waiting for a chance to snap at my target this morning I spotted another rare visitor, a redpoll. It was a male in its first winter and very welcome. I tried to get a picture but only succeeded in getting a rear view shot, the damned things don't sit still for long. Nor did the bramblings, every time I had one neatly framed it would flit off and I'd have to start again only to have a car, person or cat appear and the whole mixed flock would be up and off. So, the pictures I took are not perfect due to my camera's limited ability, my very limited ability and the whole lot being shot through a dirty window - which apparently is also my fault.

If you have a spare 'tuppence' and can find it in you to put a few seed or nuts in a feeder then please do it, there are very few berries left on the bushes this winter and a lot of our feathered friends are going to struggle during the cold weather. Also, there can be few greater pleasures that accumulating dozens of feathered pets that will brighten a cold day and give you hours of entertainment.
Posted by Dave Burr at 13:11