Neil and I arrived at the lake and mulled over the choice of swims, it didn't take long as something was causing occasional disturbances in a rush bed and two swims were conveniently situated one on either side. Tactics were obvious then, one rod across to the sunnier side of the lake and another just off the weeds in case it was carp cavorting in a natural warm spot.

After a long break from session fishing the process of building my house and getting organised was slow and disorganised but I eventually got there. I had though, chosen a spot where although comfortable and with an excellent outlook over the lake, my bivvy door faced due east which just happened to be where the wind was coming from. It was cold and got even colder as the sun dropped.

I scattered a light amount of boilie/pellet and corn near the weed bed. The swirls and rolls continued but looked suspiciously uncarplike. Eventually I found the culprits - pike. They were hanging in the shallow water and picking off either small fish or frogs causing great vortices as they attacked. I had no pike gear with me so I left them alone, I was happy with my swim anyway and Neil felt likewise.

Despite a narrow gap in the overhead foliage, (bit more gardening needed there), I buzzed a bait across to the far side. I made everything slim and aerodynamic to get the full 90 to 100 yards I needed and to this end I slid the lead into some pva sock and topped it up with just a few little bloodworm pellets and a couple of crushed boilies. I was unable to loose feed due to the gusty wind and only having 15ml boilies with me, they just didn't have the bulk to carry the full distance, but I didn't mind, there's no point in filling a swim when the fish aren't getting their heads down. I was fishing for a bite not a net full. 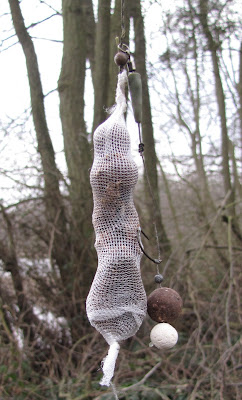 As darkness fell so the owls became active and it felt slightly milder. I sat outside my shelter reading and just taking in the moment but I soon felt chilled and unusually for me, I shut the bivvy door and led in bed reading a fishing book. I soon felt tired, settled down and dropped immediately into a deep sleep.

Something was making a noise, what on earth?...... I rose from the depth of unconsciousness slowly realising I may well be listening to my bite alarm. Suddenly I was moving with urgency and the old routine of - shoes on, head torch on, door open and out to the rods - fell into place. I stood - groggy- a little confused, (I must have been in rem sleep) and was just wondering which rod had gone when the left rod burst into life again and I lifted into a heavy weight.

I love that first contact. The weight followed by the thumping down through the rod, I smiled. I looked across towards Neil's swim and could see his head torch shining through the tree's his voice carried through the air "I thought you were never going to hit that bloody thing".

Meanwhile my brain was slowly catching up with the fact that my line was not coming in as smoothly as it should and that the angle from the rod tip went up rather than out toward the lake surface. The fish had kited left and the line had picked up on a branch overhanging the water. My torch did not penetrate the dark and I was trying to conjure up a mental image of the trees to my left, but I came up blank. However, I could see the line was moving a narrow branch so kept pumping away in the hope that it would free itself. It didn't. It all went solid and I tried shaking and pulling from different angles realising that any one of which could dislodge the hook. I decided to go for broke and heaved the fish hard making it surface still some twenty five yards beyond the snag. We muttered back and forth about 'shit or bust' as opposed to going in to freezing water in the dark - a non starter. The fish was now beneath the tree and thankfully it freed. The last bit was easy, it was tired and slipped into the landing net without fuss and Neil wasn't about to make a mistake - it was mine.

First job was to put a coat on then it was the usual weighing and photographing routine and back it went - 23.8 a very satisfactory result. 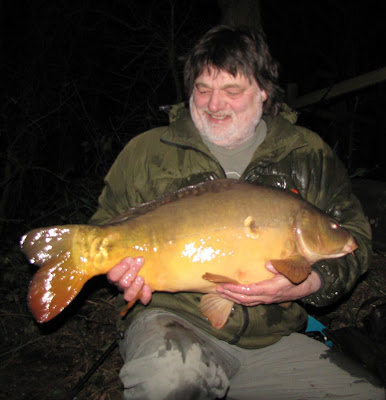 I was back in bed in no time but was now frozen to the core and had a fitful sleep. The second day and night passed with just one bleep, a liner at dusk and Neil fared similarly. It matters not, we had some quality time together and there is a long (hopefully) summer ahead of us, this was just a chance to blow the cobwebs off our gear and it will be warner next week. Can't wait.

Whilst I was away the news came that Dame Margaret Thatcher had died. No politician has ever polarised opinion like Maggie but, for what its worth, I was a big fan. I think she was the best politician in living history, maybe ever and although there were losers in the great shake up, the country came out of it stronger than it had been for a long time. Pity its in such a crap state now, we could do with another Maggie Thatcher.