Split Cane And Centre Pin On The Cheap

I put my hands up and declare that I have spent way too much money on cane rods and centre pins in my time, especially over the last year or so. To my defence I have sold a few and made a bob or two profit along the way so its not all bad, we're not quite up to the National debt of Cyprus just yet.

I have though, recently discovered a hidden gem that has been hither to overlooked by the purists but which may just be an ideal route into the world of centre pin use. I'll explain.

Most of the modern pin users seem to be looking for a reel with which they can fish the margins for carp and barbel. Its playing a fish through such a direct contact that makes the pin so appealing and having a good fish or two will certainly convert most that experiment. The long trotting, although still well practiced, seems to be a secondary concern. Of course, with all centre pins comes the dreaded need to Wallis cast or similar and getting the desired distance, accuracy and delicacy of presentation takes time to master and puts many people off, none of us are beyond suffering the occasional birds nest.

Ray Walton has capitalised on the incapable or lazy by merchandising his Rolling Pin reels that have the ability to turn 90 degrees so they can be cast like a big fixed spool reel. This makes long casting a doddle yet never renoves the thrill of the fight. Unfortunately these reels cost somewhere between £250 and £350 a pop and that's steep, so how about the same for a fiver?

The other day I bought a cheap and cheerful Scout centre pin reel for les than twenty pounds delivered. It was small, didn't run particularly well but was after all a centre pin and it has that same twist to cast feature. Neil took a shine to it and its now in his tackle bag.

I checked out the Interweb and soon found another one, this was a larger version which I snapped up for a penny less than £5.00.  I noticed another forum member had acquired another one (a medium sized one) in a job lot of reels that only cost £10 the lot. Emails were exchanged and he has kindly posted it to me free of charge. You cannot get any cheaper than that. 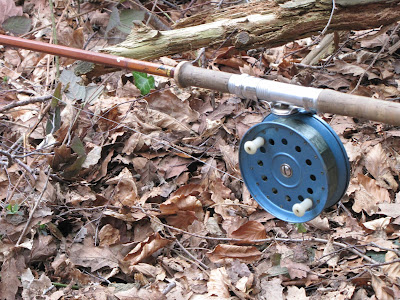 Okay, nobody is going to go trotting a light stick float with a Scout but for margin fishing I am confident that they will be more than capable and I just find their quirkiness charming and I really like them.

So what about rods? Well I have my share but I have been looking for a stalking rod with a bit of grunt but which will withstand the rigours of a day amongst overhanging trees and undergrowth. I want a rod that will stop a 30lb carp at close quarters but which is ultimately expendable, I have no intention of breaking it but I don't want to fret each time a fish charges off and I have to stand my ground.

Last week I won a rod on Ebay, a Sharpe's Scotties Impregnated 9' 3" salmon spinning rod. This was designed for throwing a lure and fighting big fish, it is robust and reliable, it cost me £20.50. I had to put a couple of gallons on top of that to collect it but that's £25 for a stalking outfit that will land just about anything that swims in UK waters, certainly anything that swims in my syndicate lake. 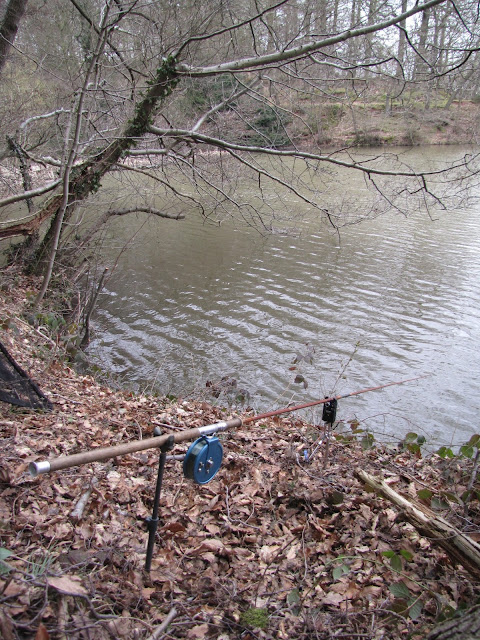 Today I gave them a go. The weather is on the up, the chiffchaffs are back and singing, I saw Tortoiseshell, Peacock and Comma butterflies. All in all an ideal time to visit the lake to see if the fish are on the move. They were. I found several basking and one out of reach lump gave a spectacular splash as it crashed out of the water.

I snuck into a swim where a Wallis cast would have been difficult but, with a deft twist of the spool, I made a perfect underarm cast into the desired spot. Alas the fish did not play ball and I went home without a bite but I am satisfied that I have an ideal set of tools for the job and at a ridiculously low price. In austerity times, that makes good sense.