The boys were back in town over the weekend, earlier this year 'so that its warmer' and warm it certainly was. The river is at rock bottom level, the fish are nailed to the snags and the fishing was damned hard work - not that it mattered one jot, we all had a laugh or two.

I've spoken about our collective lapse into the advanced middle age before but this year even the normally unstoppable Carl looked a bit jaded come Sunday. To add to this, apart from the usual complaints about a few aches and pains we now have a number of genuine conversation piece illnesses and conditions amongst the throng. I'm serious, we are talking life threatening conditions that were explained, in true northern style, as 'Summet t' deal with but tha' can't let it get yuz down'. Add to this dear ol' Bunny, who couldn't come, was struggling to come out of his anaesthetic after having some bionics implanted. We were all medically aware by the end of the first evening. Thankfully everybody is having treatment and Bunny is on the mend - what a bunch of old farts we are becoming.

I had a stroll around on Friday and chatted to most of the crew explaining that to add an element of competition to the proceedings an award was to be given for the 'Most significant capture' of the weekend. The prize was to be a painting of 'A Typical Wye Scene' and despite nobody getting moist with excitement, I was later informed that the eel that woke Tony from his slumber was 'significant', so I knew there was an edge to everybody's fishing.

Incidentally, Tony managed to join his lie in, siesta and afternoon nap into one long zzzzzz as he slept for about five hours! "It was the antihistamine tablet I took" he proclaimed but those of us that know better think he is either narcoleptic or half dormouse.

Andy Ross sat with a large group of hungry barbel feeding in his swim. This was amazing as its the only place I've seen significant feeding activity all season and the biggest was at least twelve pounds in weight. Despite feeding them all day he blanked - which made them that little bit heavier for the next day when Carl would fish there. 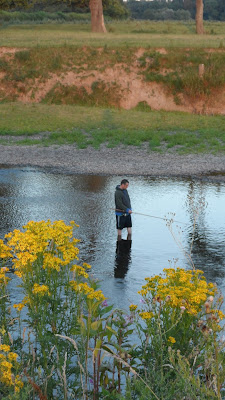 I think that only Ian and Carl caught barbel on day one. I lost one as did one or two others as they were only feeding close to (or right in) the snags. There were quite a few chub though with Richard Walker (honest!) taking some nice fish on the float and a lump to Neil who was wading in trainers and shorts (as were several of us - the water was bath tub warm), but he didn't have scales with him so he let it go and got a soaking from a mighty kick of its tale - significant? we'll see.

Curious clothing was on display as the masculinity of certain members was questioned, Hobby just told us it was a gift from Thailand so we left it at that. I think he looked lovely. 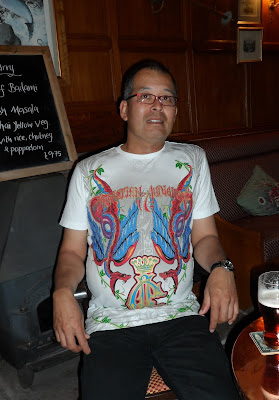 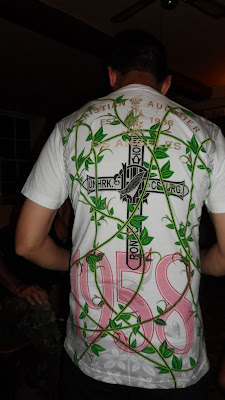 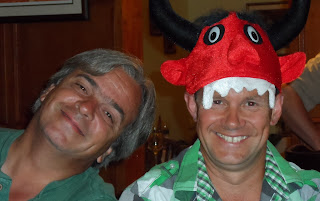 On Saturday most looked pretty spritely so it wasn't too late a night. The fishing was intense and Ian had another couple of barbel. Eelfisher spent the day in his underpants happily fishing the bushes on the far bank which meant any captures wouldn't count due to 1. They were from another fishery and 2. He had upset every canoeist that passed him - hang on, that should go in his favour.

I had a resounding blank and Andy managed only to catch a couple of scales and a barbel hooked in the dorsal fin, he was having something of a mare. Carl mean time had jumped into the swim full of fish and somehow managed to land five of them to 10.02 They must have been lulled into a false sense of security by Andy's heavy feeding the day before.

Bits and bobs taken elsewhere were discussed in the evening but the award committee (me) came to the conclusion that Carl had to win the award if only to underline Andy's short comings. He opened the picture and was moved by the touching scene it displayed. 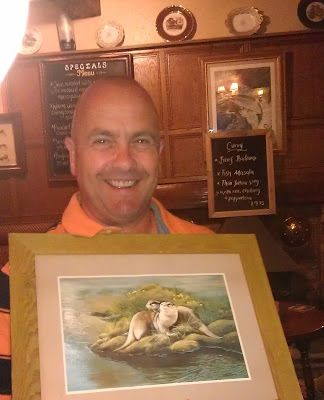 It has been mooted that maybe the picture should be awarded each year and passed on, this suggestion brought mixed reactions with the overriding opinion being that if there's a chance to win it then perhaps nobody would bother to attend in future - the miserable sods.

On Sunday Andy fed the barbel and chub again whilst Ian caught yet another barbel. He sent a text proclaiming his capture and stating that he was the only person to take barbel on each day - and that he didn't want the picture thank you very much.