The first fish I ever caught was a Scorpion Fish (basically a sea going version of a bullhead), in Weymouth harbour. The first coarse fish, caught with my hands, was a Bullhead from a tiny stream beneath a packhorse bridge on the edge of Taunton. Those captures, made in the early sixties, were the seeds from which my obsession grew and have always had their place etched into my memory.

Come forward to present day and countless fish have thrilled and inspired me over the years and, with each fish caught comes a yearning to get the next one - its just the way of us anglers I suppose, never truly satisfied. But I have a strong sense of nostalgia - a sure sign of ageing I guess - and I still enjoy getting in touch with my past. Just a few weeks ago I spent several happy evenings poking through the weed and stones of rock pools in France and I just know that I will never grow out of that pleasure and why should I? Well, yesterday I was back in a shallow stream and my youthful experiences came flooding back.

Its odd, the river Wye is in desperate form and I have spent way too many fishless hours there. I am at a stage where I am almost ready to concede defeat until the rain comes but, as that may not be for another week or two, I doubt I can stay away for that long. I have begun to question my enthusiasm, my drive and determination for success but I now know that they are still alive and kicking.

Neil and his girlie have gone to the lake for an overnight session so we are looking after her little lad Jaycob (I know, its a modern trend in giving stupid names or mis-spelling old ones and I don't have any say in it) He's four and full of questions, mischief and is a sponge for knowledge. Trying to keep him occupied is full time work so any distraction that I can enjoy as well is seized with alacrity. So it was that we went to the local park which just happens to have the tiny River Arrow running alongside. The ideal environment, slides and swings for burning energy (and hopefully a long sleep), loads of room to tire the dog and a stream for me - err, and Jaycob to explore. When I was about four five or six I used a small jar to catch the fish. I well remember the excitement of getting my first pair of black Wellington boots which, being knee length as opposed to the silly little red things I'd previously worn, meant I could go out of my depth much farther out than before. Today though, as the heatwave continues the chosen footwear was just a pair of sandals that would dry out quickly enough when I was done. Jake opted to leave his footwear on the bank and slipped and stumbled in his bare feet, he loved it as did Harvey who is never one to miss a paddle.

Unfortunately the fish were thin on the ground, I searched the shallows for sticklebacks and fry, I turned stones looking for bullheads and loach but found nothing. We worked all the likely places and the instincts of this basic form of fishing came flooding back so that when Jaycob just saw it as fun in the water, I was becoming more and more determined to catch. I had with me a net and with such a luxury item I was certain that anything I did find I would land. 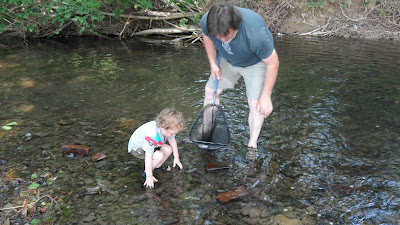 At last I turned a stone and felt the flesh of a fish - there are fish here, but the encounter was all too brief. Then I saw a tiny bullhead but it slipped past the end of my net and back between the stones. The next fish was a monster, well, at least four inches - and I missed it. I was now lost in my own world of reliving my childhood, proving a point and just plain having fun. The next fish was encouraged to swim into the net - success! I had my prize and carried it triumphantly to Jake to show him, to inspire him to a world of discovery and pleasure. He had a look and said "Are there any bigger ones in there?"

I was crest fallen but at least he continued searching under the rocks and bricks even though he wasn't sure what he was expected to find. I caught another but he didn't bother to stop and look at it. Ah well, he's still young and there's plenty of time.

When we got home he produced a magnetic fishing game with a short plastic rod and reel and fish with magnetic noses - he sat and played with it with me for ages...... there is hope. 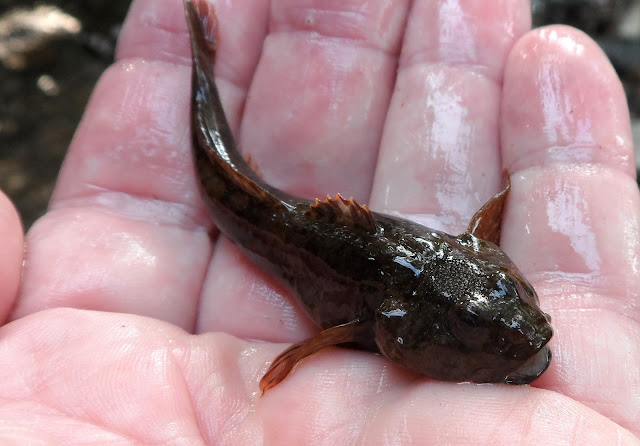