August is an unusual month. Its a time when nature has generally peaked and the steady decline from frantic reproduction and bloom toward the sublimity of autumn is underway. There is less birdsong in the air and the fish are somehow less intent on feeding hard, it is a hiatus in the natural world when even we humans tend to take a long break from work and toil.

This change of pace effects our fishing plans and I have always found it to be a month of promise with little result. In a season that has been inconsistent already I am perhaps a little over cautious of my choices as to where and when to fish, I've had more than my share of disappointment already - a guy can only take so much you know.

Barbel, carp, grayling or that lake full of wildies I keep promising to visit? Decisions, decisions. Then my phone developed a mind of its own and began ringing people apparently at random whilst in my pocket. We've all 'pocket phoned' before but this was so random and then developed a number of obscure faults so that I thought it time to throw the damned thing in the river but it is due replacement and it did settle down - eventually.

One of those called sent me a text asking what I wanted, I politely replied on a stuttering mobile and we had a little to and fro. He's a member of my carp syndicate and we told each other of the lack of fish etc but then he dropped the bombshell "I've had some nice crucian carp to 1lb 11oz". Game on.

There are three lakes on the estate one of which was stocked with genuine crucians a few years ago. I was led to believe they may be as big as a pound in weight but my attempts on that pool resulted in roach by the net full, perch and the occasional bream but as yet no crucians. I knew they were there, the tiny bubbles, the delicate bites - so far unhittable, I just hadn't given them a proper go. Here then was my chosen species for the next trip.

Its a little pool, very weedy and overgrown. I chose to do it 'old school' and used my Lucky Strike rod, Trudex reel and fished under a float I'd made myself a long time ago. I perched on a little platform that takes you over the marshy, reed strewn bank. Here I sat, leaning forward, rod in hand trying to zone out the world about me as I concentrated intently on the quarter inch of red tip above the green water. Liquidised bread and corn was fed in small balls and bread either punched or wrapped around a size 16 was the main bait. I also used small grains of corn and a few hookable pellets, I caught on each of them.  Roach after roach came to hand, all small which was a shame, this pool does some decent fish but not today.

I learned quite a bit over the next few hours. My reactions are nothing like as sharp as they used to be for one, those little carp can sip a bait off the hook with barely a twitch on a float set so sensitively it would move if a stickleback sneezed. Also, concentration is harder nowadays. I won't moan about my aches and pains but the medication definitely takes the edge off so I sat poised and as alert as I could, eyes fixed on the red tip, ignoring everything outside of my narrowed field of view. It wasn't easy, there was just so much going on. Butterflies, Dragonflies, Hornets and a thousand other insects flew by and I steeled myself to ignore them once they'd left my peripheral, I didn't even look up to spot the sparrow hawks that were bringing food to their noisy chicks just a few yards away. I was serious.

Nicky (bless her) had given me a chocolate bar that morning to 'eat when you've caught your crucian'. I felt bad about it but as I took a coffee break (and pain killer), I figured a sugar rush may help and, whilst expecting to have to buy a replacement on the way home and practice my best innocent face, I devoured it.

Back to the fishing and first cast the float dipped positively and I was into my crucian carp. It fought in classic style, plenty of movement but little direction and the Lucky Strike absorbed each lunge with ease. I slid it across the weed and into the net feeling an enormous sense of elation and relief. Okay, I didn't weigh it but I doubt it made more than a pound and a quarter but it was a result and probably my biggest crucian to date - its been a long time since I had any that's for sure. 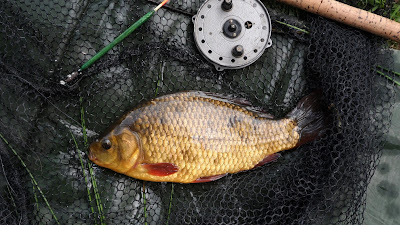 I shall go back for some more crucians but next time I will use a light rod or even a whip, but I know that as the month progresses toward September so will the chances of some decent carp, barbel etc and I'll have to pick my targets nearer the time.