The Month So Far

September used to be the barbel month for me but the last few years it has been less predictable, so what would this year bring?

Well it started with a short evening blank where my rod top remained motionless in a couple of swims that I felt should have produced - oh well. I'll be honest, I wasn't at all put out by the lack of action as it was a beautiful late summer evening and I sat mesmerised by a changing sky that culminated in the best and biggest sunset it has ever been my pleasure to witness. Neil and I just stood agog as the ever changing spectacle formed and died around us like the summer bleeding out, sacrificed to make way for autumn's advance. 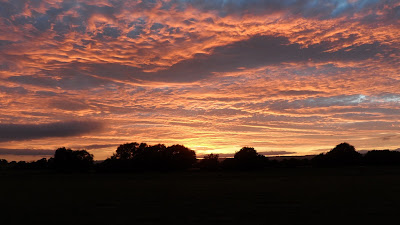 The season's change was underlined by the cooler evenings and a sense that the fish should be feeling that rumbling in their tummies as they pile the weight on for the long winter ahead. Just as well as Paddy was visiting for a few days and, as always, he expects a fish or two as reward for the long drive up from West Somerset.

On his first day I made certain he caught. There's a swim I have kept on the back boiler, its done the business on every visit by me and Neil although we have not abused it, fishing it when a fish is needed to cheer the spirit during this challenging season. Paddy settled in and I announced that I would chub fish elsewhere as I felt my chances of a barbel were limited in these low and clear conditions.

I soon had a bite and hooked into a solid fish that declared its species by plodding straight toward an sunken willow tree, a chub and a heavy one at that. I leaned against it and pumped then pumped again. I felt I may have done enough to steer it clear when it all went solid, it was firmly stuck in the snag and nothing I could do would shift it, I went through the whole repertoire of slack line, steady pull, swearing...... the line broke.

The next bit came from a chub of well over four pounds which I handled with ease, okay, it did swim upstream rather than head for sanctuary but I am convinced that the first fish was a very good cub and I shall be back.

Paddy had a couple of barbel and was looking content so I visited another swim for the last hour before dusk and had three more chub. 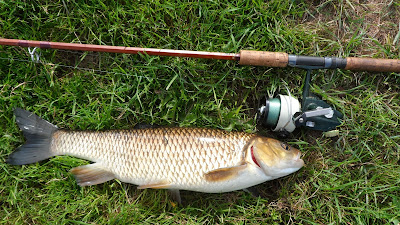 Day two and I declared it was my turn to have a barbel. I dropped into a quickie swim and, as Paddy watched, I got a few barbel to show before setting a trap. Just five minutes later I was fighting a lively fish that had a look at the other side of the river before heading for a snag. I leaned against the fish and snap! It was gone. I inspected the line and found the last four feet to be chaffed, there's definitely a sharp rock in mid river where these fish know they can weaken the line. I've now lost three fish from this swim whereas I think I've only lost one there in the last ten season! Its just been that sort of a season for me.

So we set up in the famous Cock's Comb, a swim that has probably produced more double figure barbel than any other on the river. Unfortunately it is now nothing like as prolific as its past but it still holds a few barbel and lots of lovely chub. We sat side by side, chewing the fat and winding each other up all day in the same way that we have done for forty seven years now. A really enjoyable day and I rubbed Paddy's nose in my five chub haul even though he insisted in under estimating the two fish that were a few ounces either side of five pounds. He blanked.

Which meant that today I had to let him fish the going swim again lest his teddy land in the river and frighten all the fish away :-) He had another couple of barbel whilst I snoozed the afternoon away only waking when it rained and then when a chub dragged a yard of line from my Cardinal 66. I was entertained by an upper double pike that mouthed my lead as I retrieved and then settled in front of my swim, menacing the minnows and dace that had been feeding on the titbits I'd given them.

I've another busy week on the river ahead, I just hope I can shake the fish losing monkey off my back and have a few barbel - we'll see. 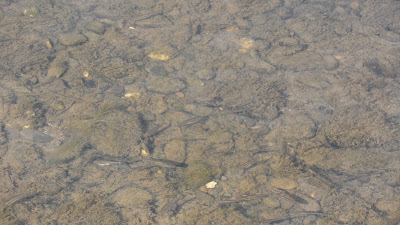 Before I go, here's a picture of our modern world and how a once essential facility now stands abandoned and surplus to requirement. Nature slowly reclaims all. 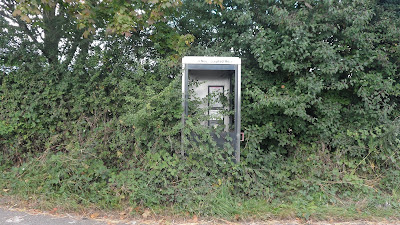 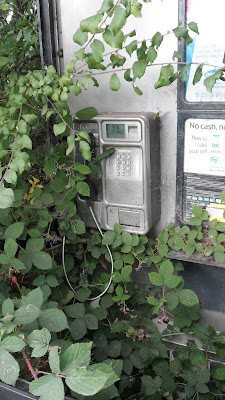