End Of Season Round Up

About ten years ago I set myself a little end of season challenge to get a photograph of a barbel next to a clump of daffodils. I have somewhere a picture of a chub and primroses but my end of season barbelling has found the two items on my subject list hard to join. I can find flowers and many more this year than last when Spring was so reluctant to arrive, the barbel however, have been getting more and more difficult as the years progress. The quest continues.

In fact any fish has been my challenge this year. I had a couple of days when short afternoon to dusk sessions brought nothing, not even the merest tremble on the rod. Talking to Tim, who'd been fishing all week, my blanks coincided with days when he was fishless even though he had caught on the days either side. Was it my misfortune or had my cursed bad luck affected the entire river?

I tried again and settled into a spot that has brought me a few chub in the past. I trickled cheese paste and a few broken boilies along a crease then wrapped a veneer of paste around a small boilie and sat back to wait for any hint that a fish may be present. I even fished with a bobbin for added sensitivity, my improvised paste bite indicator wouldn't quite sit still so I leaned a dead stalk across it and everything sat just so - now all I needed was a fish. 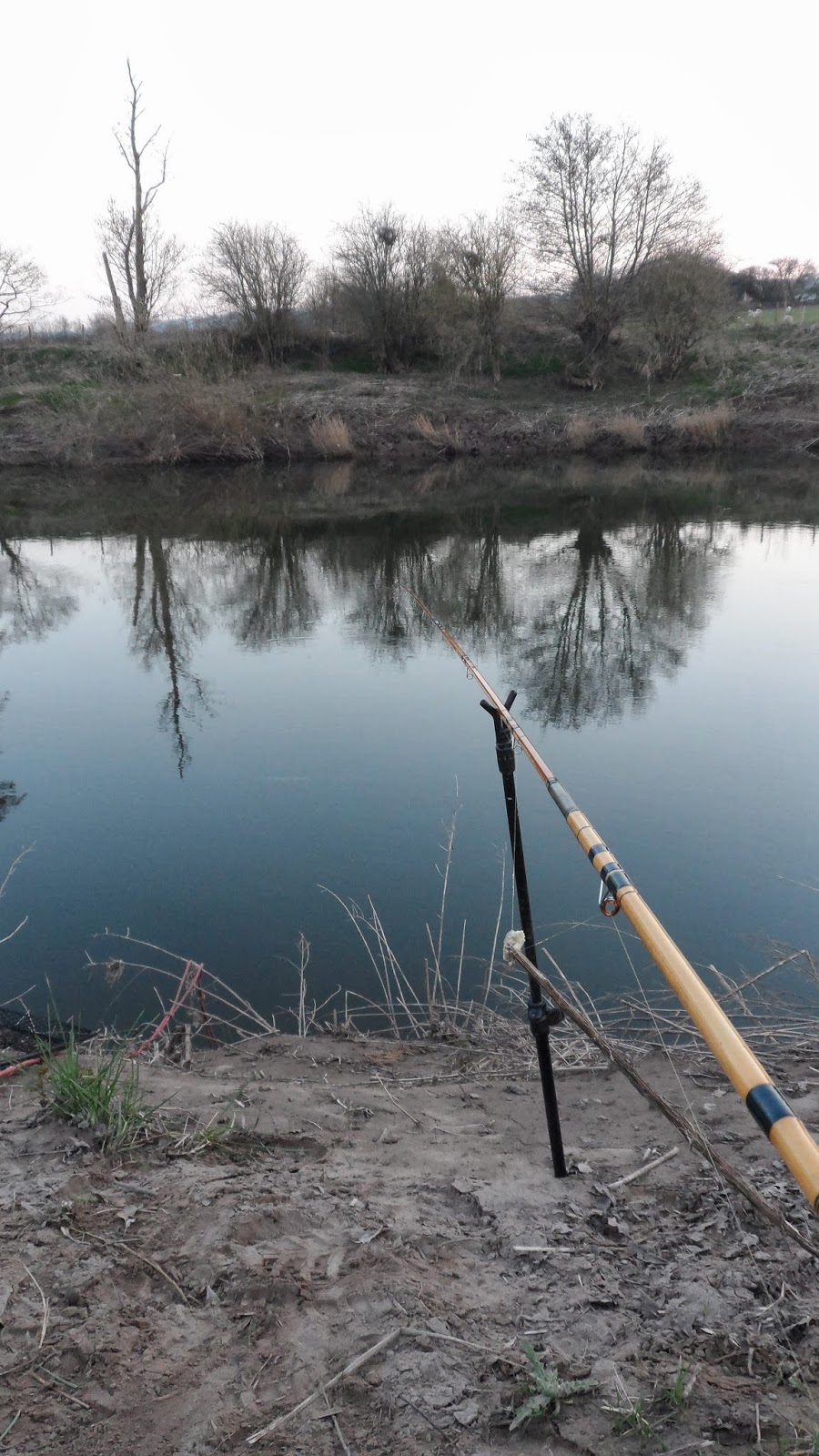 The bite came when my resolve had weakened and I was chatting on the phone. The bobbin shook, then lifted smoothly toward the butt ring. I grabbed the rod and lifted, there was no snatch in my movement and no feeling of weight as the rod raised, just a bit of a pull then nothing. I wound in a broken line above the hooklink, it was like striking against a razor blade. I was crest fallen.

I set up again and concentrated hard as dusk approached, it just had to happen again.

The bobbin twitched then shook as did the rod tip. I lifted the rod, removed the bobbin and held the line..... it tightened in against my fingers and I struck. In the gloom I could see my Floatcaster bending against a force as yet unseen and I felt a satisfactory as a fish headed for some tree roots. It the came toward me steadily but the silver flash I picked up in the moonlight was deep, was this a big old chub? Then it started to lift in the water and came in way too easily, I laughed out loud (perhaps slightly manic) as I netted a bloody bream. It smell instantly took me to those cold nights by the lake when my sleep is disturbed not by fat carp but by slimy bream. I went home, thankful to have avoided a total blank but still unfulfilled. 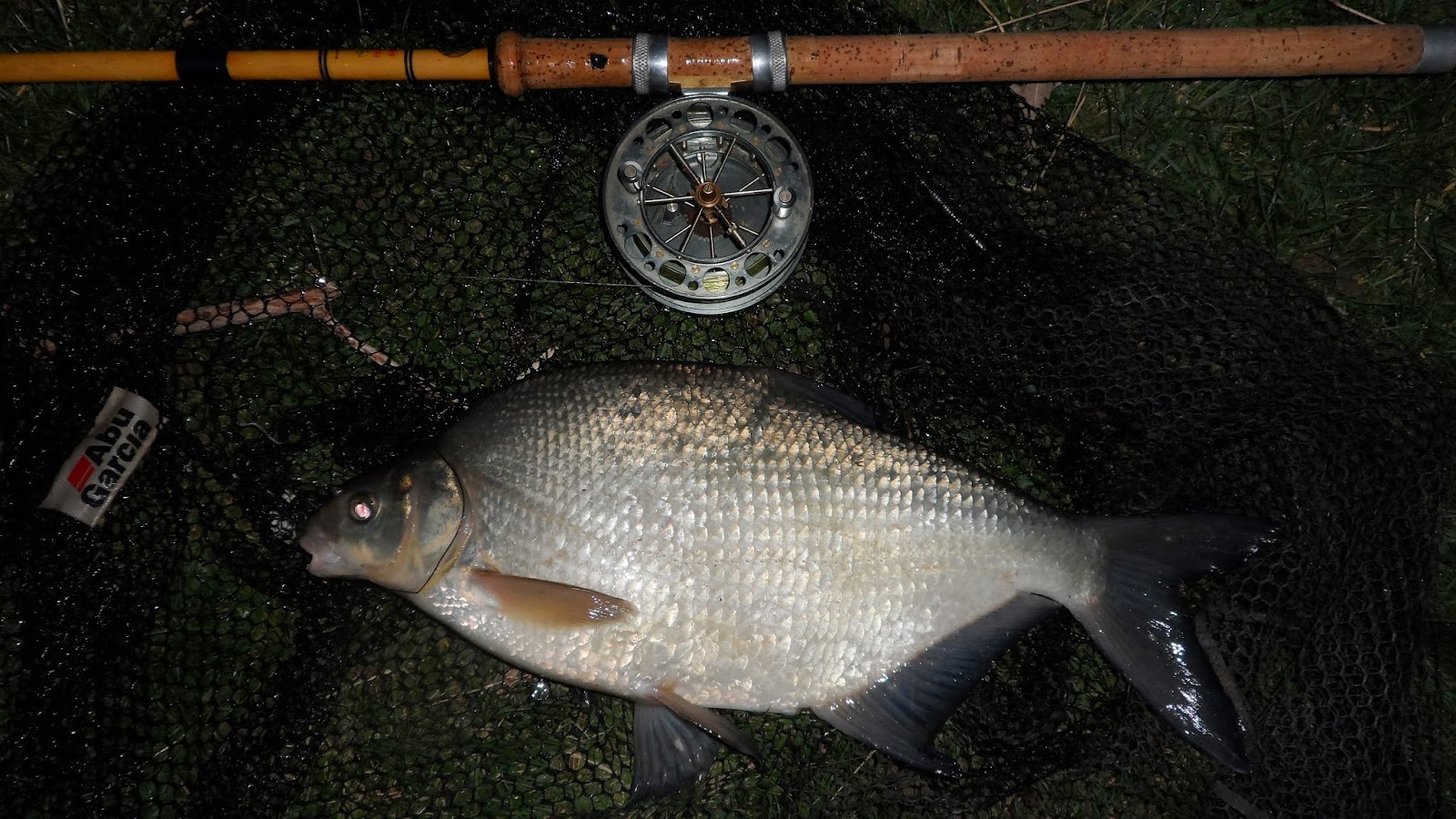 I had plans to fish the last two days with Neil and, as the river was dropping down to almost summer level and the days were very bright, I bought a load of maggots.

The 13th was spent drowning those maggots in a swim that I really did have high hopes for. It let me down as neither of us had so much as a nibbled maggot. Mind you, it wasn't the longest or best I've fished. I felt tired and ached so at three-ish I had a strong coffee and a pain killer to 'keep me going'. I then sat back in my chair and slept soundly for a hour. On waking I felt awful and went home.

The last day was upon us and we set off for another afternoon session on a booked beat to allow us our choice of swims and some peace and quiet from the screaming hoards of female groupies that follow me everywhere. I'd even baited the swims for a few days but I have to say that I was still lacking in confidence whereas Neil was ten times worse having had a similar run of results to mine.

On my first retrieve I found a salmon parr attached to my hook. Not exactly a red letter capture but I called down to Neil that 'I had avoided the blank', which brought a series of guttural responses wafting back upstream. After that nothing much happened bar a couple of interesting and quite large insects landing on me (must look them up).  We had a quick conference call and debated the possibility of a move and if so, where the hell to? I said I'd have a coffee and a think. 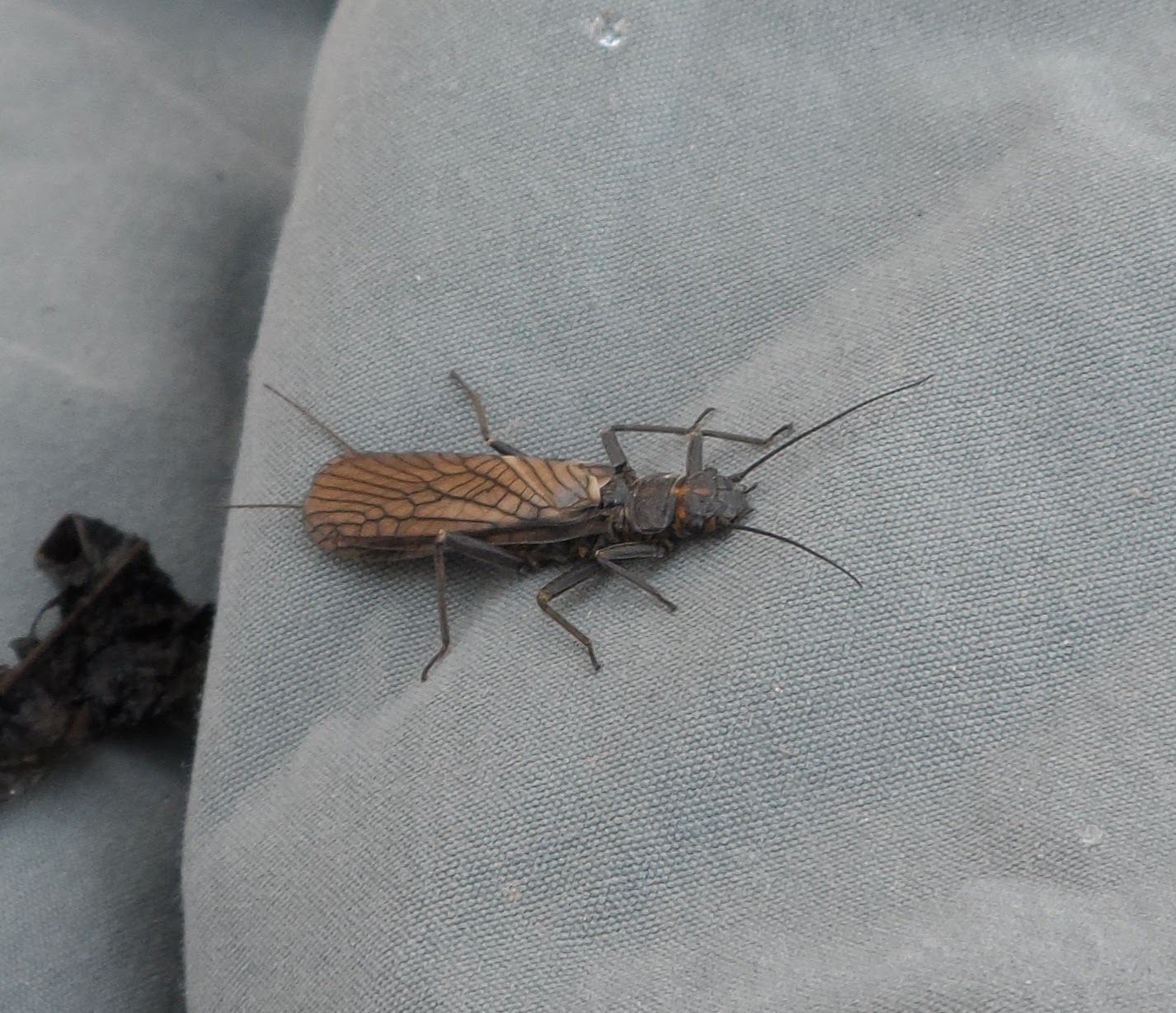 With my drink still too hot to consume I noticed Neil wandering toward me with all of his kit, he'd made the decision for us. We chatted whilst my drink cooled when I was aware of a sound, a summer sound that I'd almost forgotten existed, it was my baitrunner! I connected with the fish that ran and ran down the current and pulled well above it's weight. Eventually it slipped over the net and was duly unhooked, photographed and returned. At only five pounds or so it was nothing special but, as the photo shows, the relief was palpable. Unusually the fish had evidently received an injury on it's tail at some stage and, as it healed, it seems to be growing part of a new tale lobe. 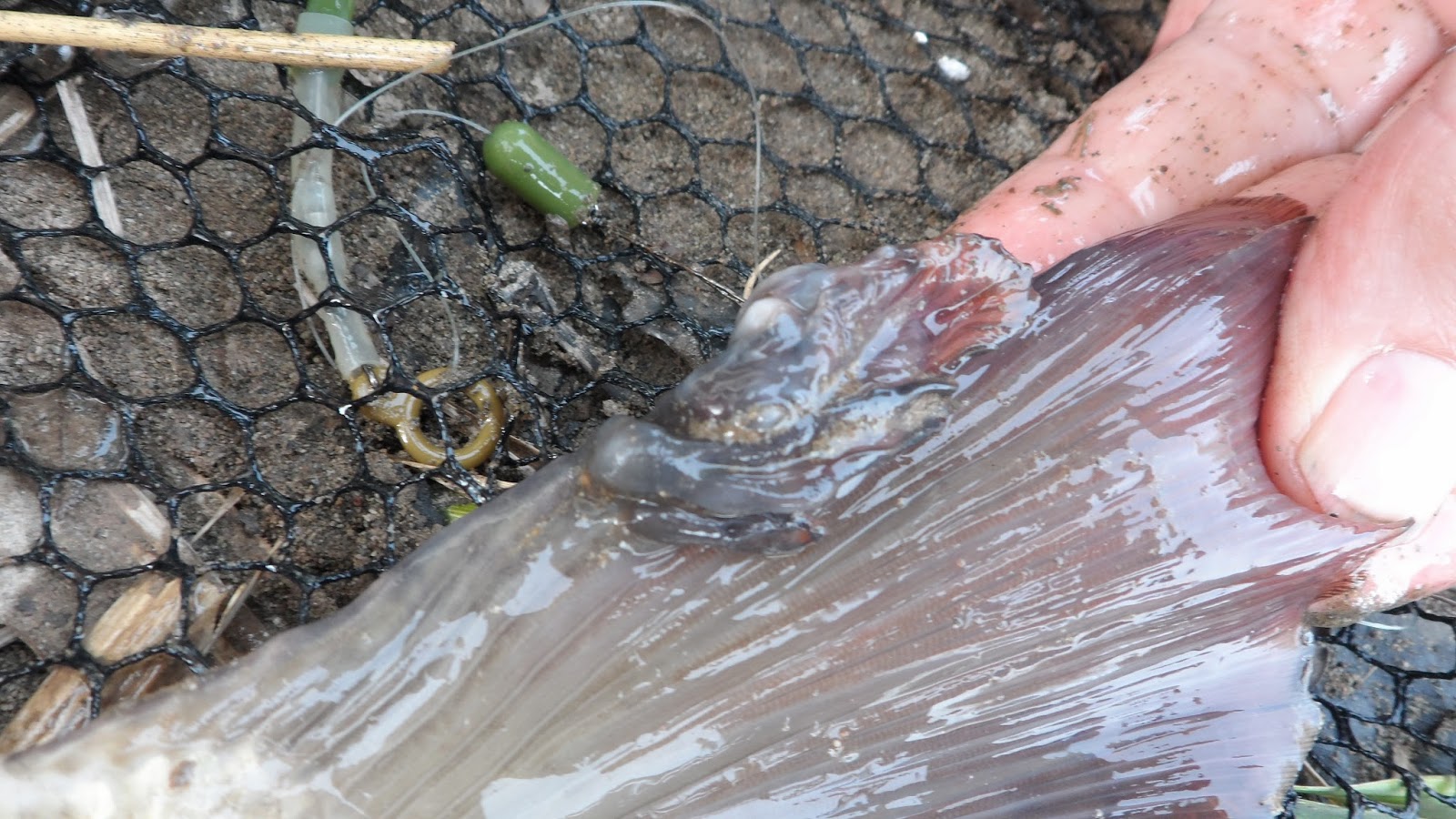 Neil joined me and we fished together as hard as possible but, as the cold wind git stronger and the light failed, it was telling us that it was time to forget the river and to think about those big carp in the lake. We humped the gear back to the car and drove off without so much as a last look. Its been a very poor season for me and I still haven't got that bloody picture. 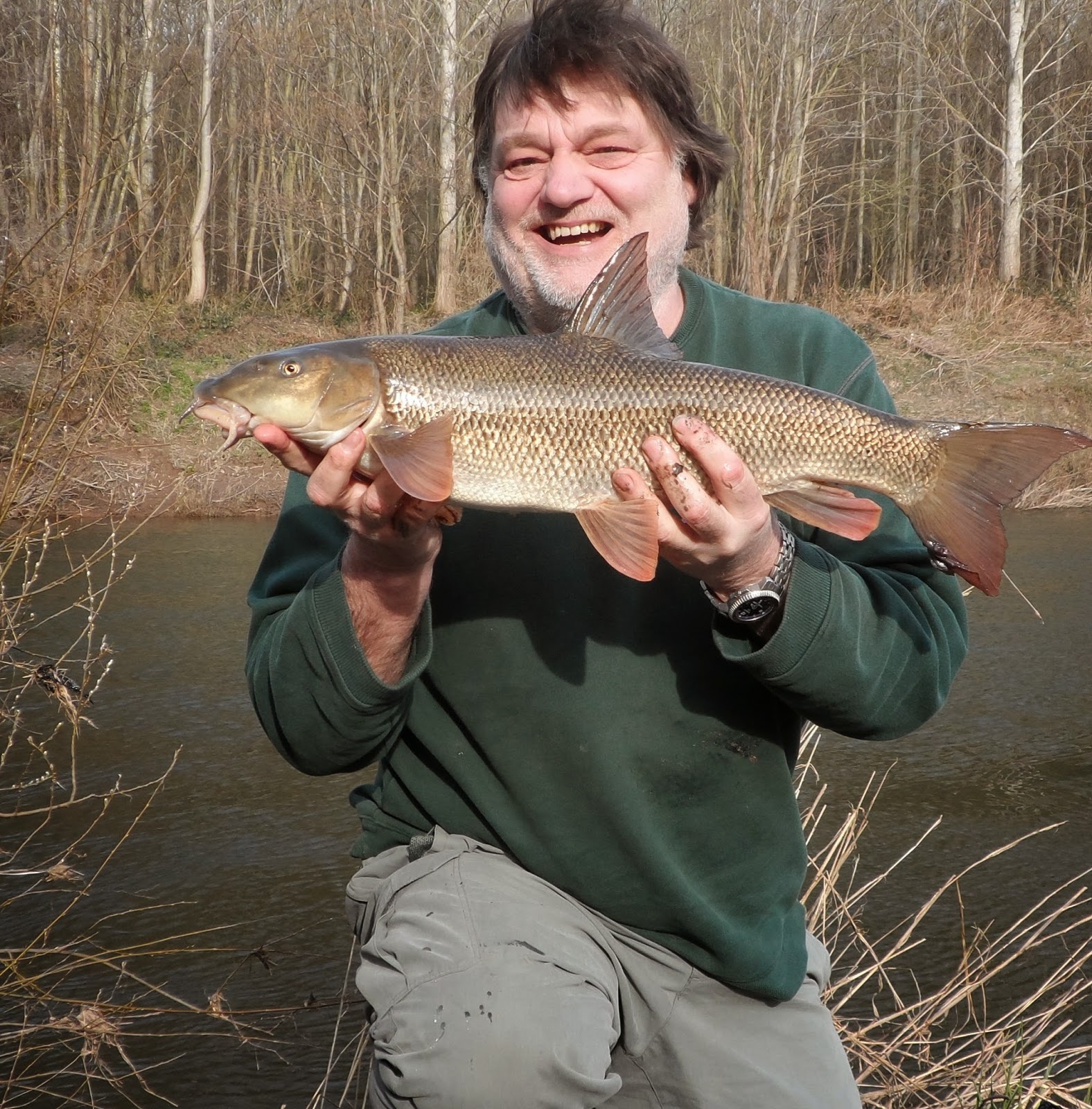 The fly is a Dinocras cephalotes. A female stonefly and one of the bigger members of the 34 stoneflies to inhabit the UK.