I always feel a little unclean when I fish a commercial. It goes completely against the grain with me as I like quiet, lower stocked waters where the fish are less pressured. However, the fish on some of the allegedly 'harder' waters are actually easier to catch and the fish on a 'seen it all before' venue can provide a suitably rewarding challenge. Funny ol' game innit.

So, when Paddy arrived for a weekend of fishing and with the river struggling to reach the banks, I offered him a day of demanding floater fishing to get us a bend in the rod. He accepted.

The venue is quite lightly fished, over a couple of acres in size and with plenty of tree cover around it which allows the fish a few hidey holes. I just wish there were less fish in the place, were it mine I'd put a few perch and pike in to address the balance. I digress. I opted for the windward end whilst Paddy took a little spit of land that gave him command of a large amount of water. Despite the bag full of floaters ( (Bakers Meaty Meals), I started with a float set up and fired a few pellets over the shelf but kept a trickle of dog biscuits going in and my eyes peeled. Of course, just as I was about to make my first cast a floater, disappeared....... then another... In a pool full of small fish these were respectable with a couple of doubles amongst them and the little group of carp circled the edge of the swim but remained close to an overhanging bush. I kept the feed going and they slowly moved closer but inexplicably spooked despite me not casting. I picked up the float rod.

First cast and the float drifted under and I had a little carp of a pound or two. But the floaters kept going in and more were being taken. This was the theme of the day and I had soon forgotten about the float rod and was intent on the visible fishing with all of the accompanying excitement it brings. Paddy had moved to the opposite corner and was also being frustrated by the fish but got one of about eleven pounds which pleased him no end despite it being quite the ugliest fish I have ever seen. 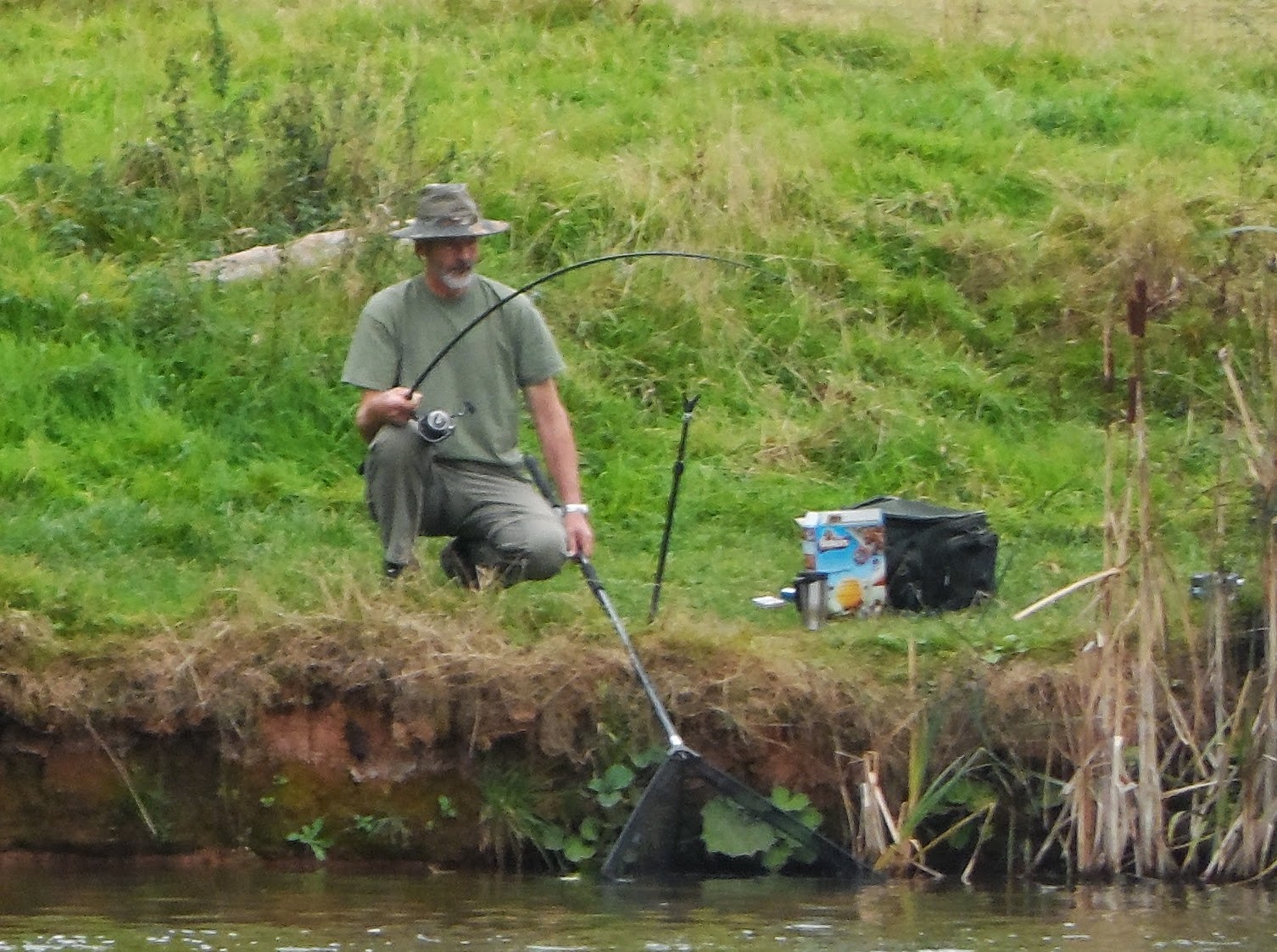 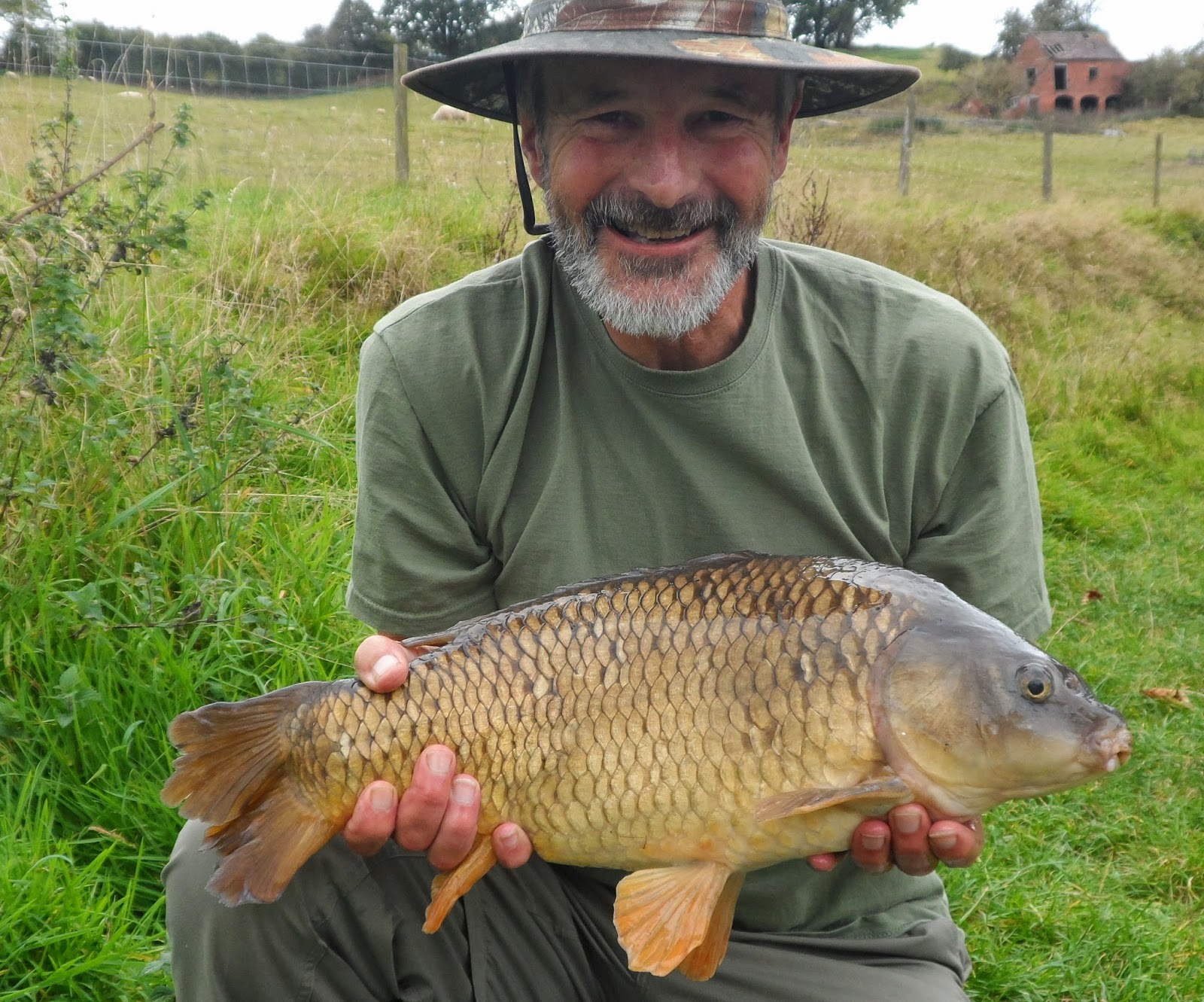 As the day progressed I decided to have a kip, but, as I was carp fishing, decided to put a bottom bait out and use an old fashioned bite alarm. The bloody thing was more trouble than it it worth as it would either sound when the wind gently blew the line or, after 'adjustment' would remain silent when the line was pulled taught. I tried fixing a paste bobbin on the line only to have it all go tight and another fish was landed. I tried to settle but the damned alarm just refused to allow me any rest and, as I flicked a few floaters out, a bloody great big mirror drifted through the swim. We are talking upper twenties at least and the colours of a conker fresh from the pod. I was suddenly enthused.

Alas, that was the only glimpse of the big fish but a decent common started mopping up freebies and I stupidly pulled the hook out of its mouth. I had done this to many fish as they seem to have an ability to spot a hook from a good distance or, if there is any doubt, they will mouth the bait in such a way that it appears a classic take yet any strike rips the bait clear of them to an Anglo Saxon accompaniment. A changing breeze was also a hindrance as it would take the line and pull the bait unnaturally. I improvised and made a controller float out of a plant stem which I split, put it on the line then held it in place with a plug of Plasticine at each end which also provided a little casting weight. 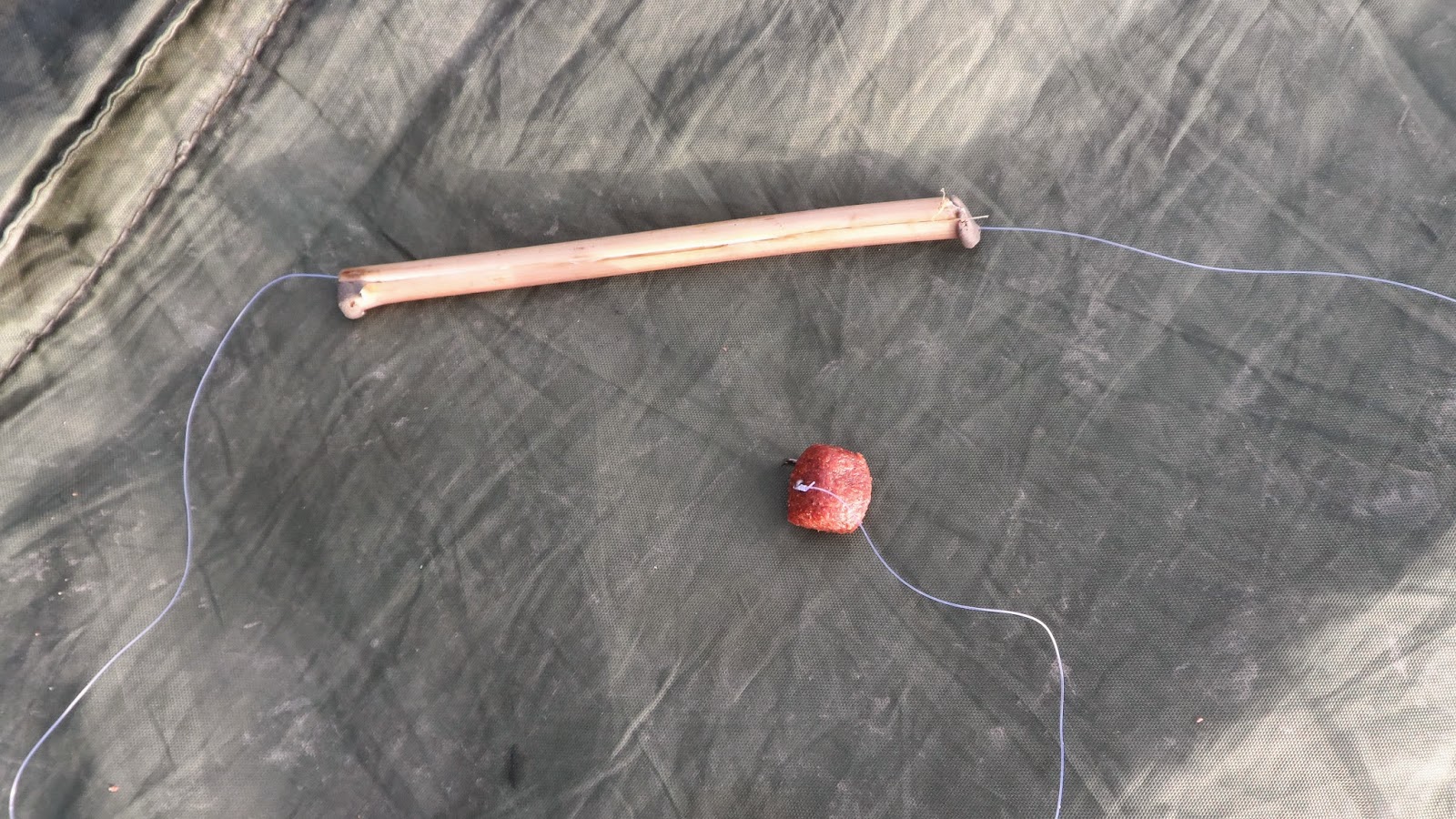 My common did another lap and I all but lowered the bait in its path and, shock of shocks, it swallowed the bait and was on! It did a few circles then woke up and fought really well. When it was at last netted it went sixteen pounds exactly. It has a gnarly mouth where it had been caught many times before which was a great shame yet, it had made the fish cautious and the capture felt a worthy one. 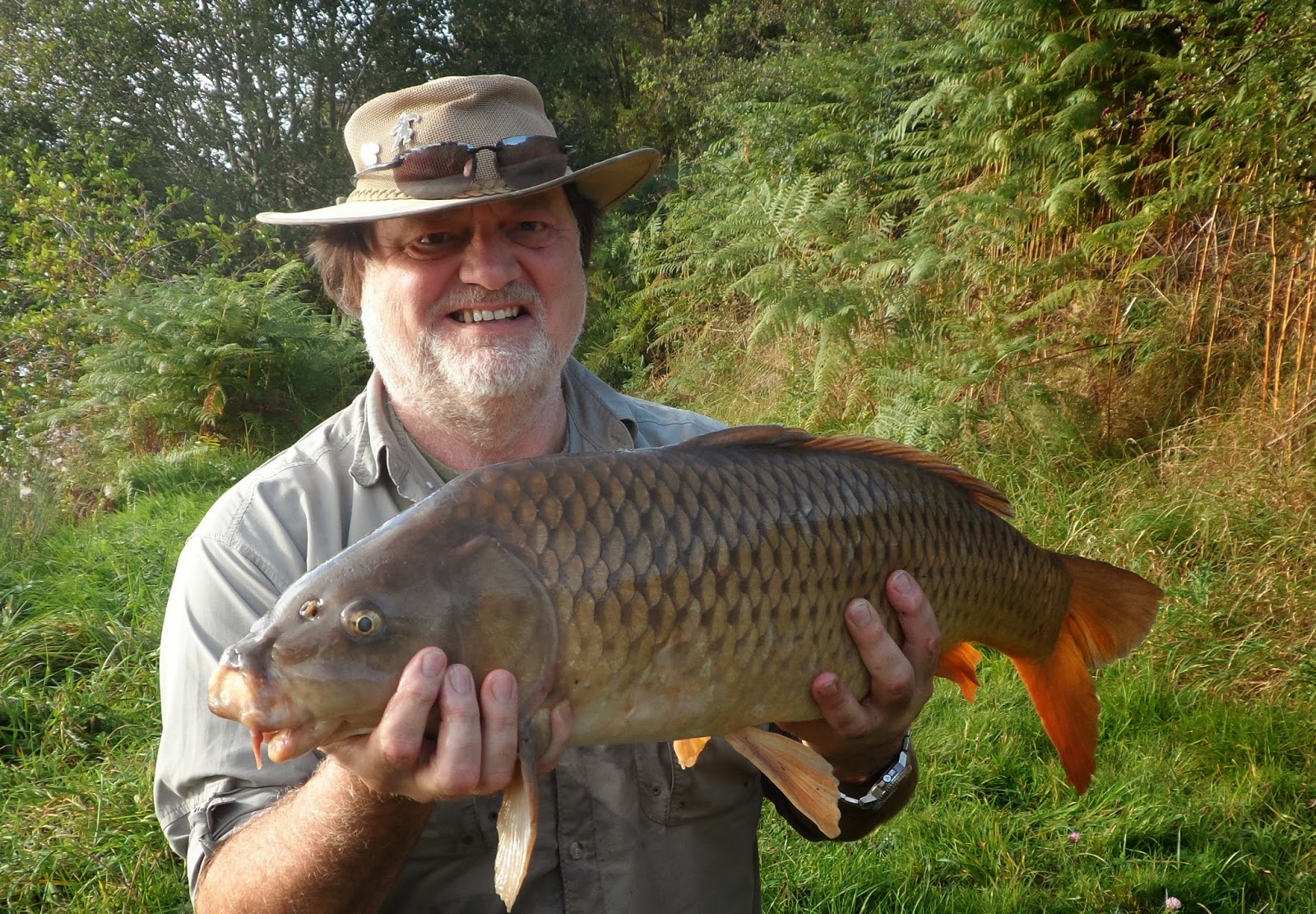 I ended the day missing and mistiming bites from an assortment of fish until I ran out bait. The score, Paddy had ten fish whilst I had five, or was it six? and a couple of floater steeling rudd.

The second day saw us on the Wye and looking for somewhere that offered the chance of some action. Its been really tough in this continuing drought but dusk is always full of potential. I gave Paddy the low down on a number of swims and he made a considered choice ....... the easiest to get in and out of. I however, dropped down a steep bank using my rope and Dog Spike and settled into a difficult and snaggy spot. I chose well. The first fish ran me ragged, even tail walking at one point - not your average barbel behaviour, especially from a mite of about three pounds. I had a second of twice the size a little later. 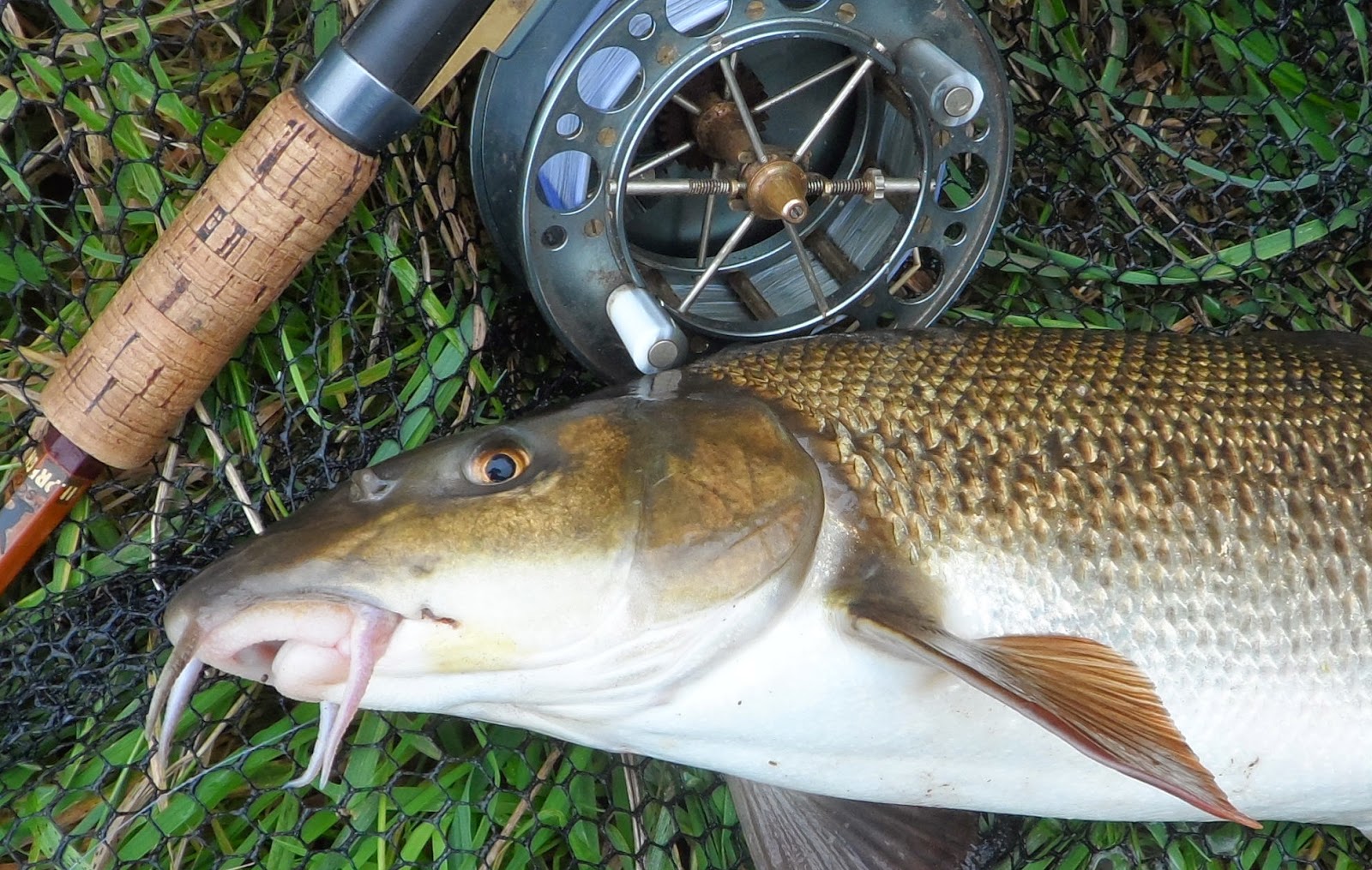 The day then dragged on and on until dusk when number three graced the net. pour old Paddy didn't get a sniff.

Today saw a bright sun breaking through the mist. It made the spider's webs look nice but did not bode well for the prospects. The first swim Paddy fished failed to produce so I went looking for fish.... and found some. 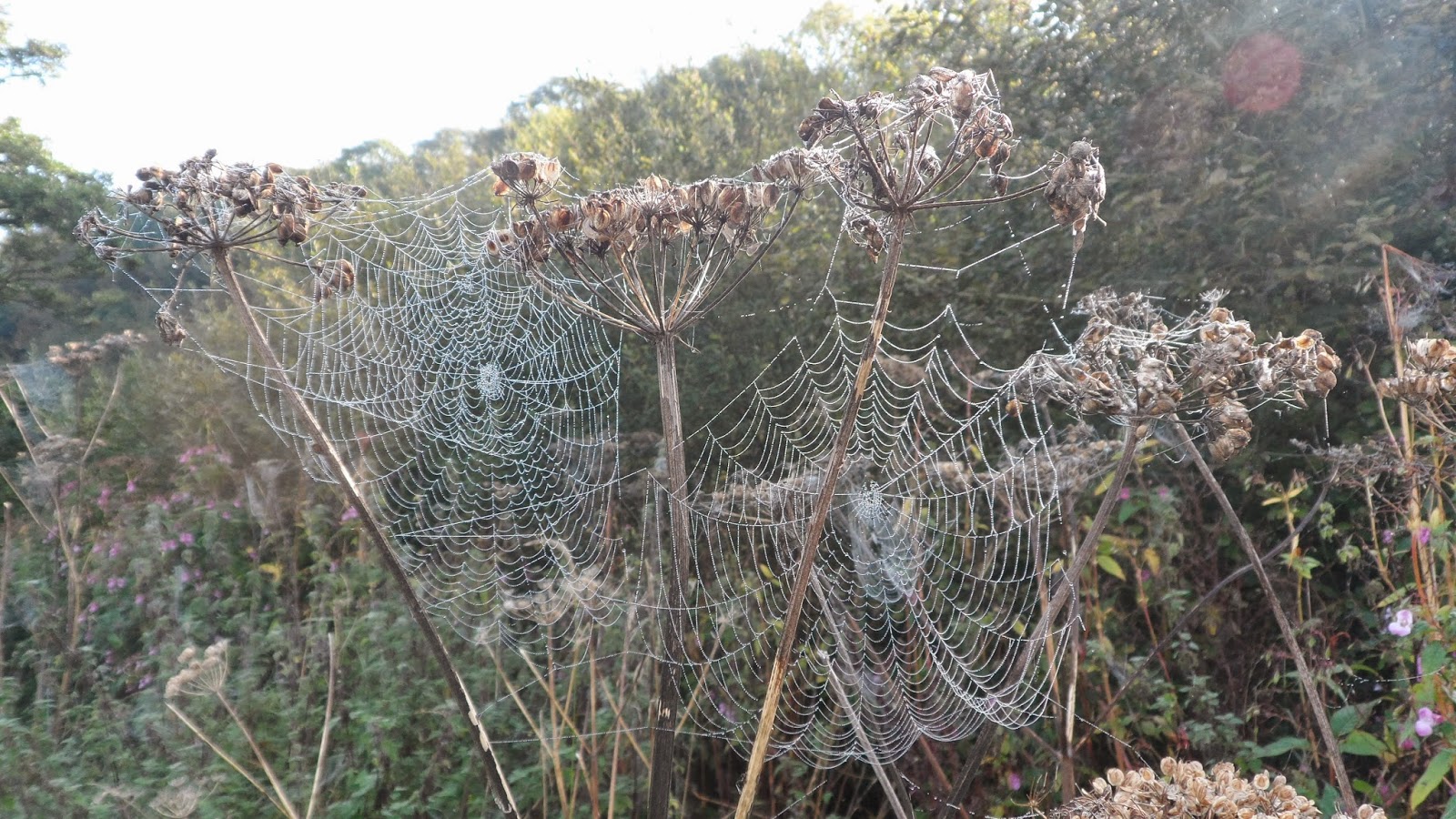 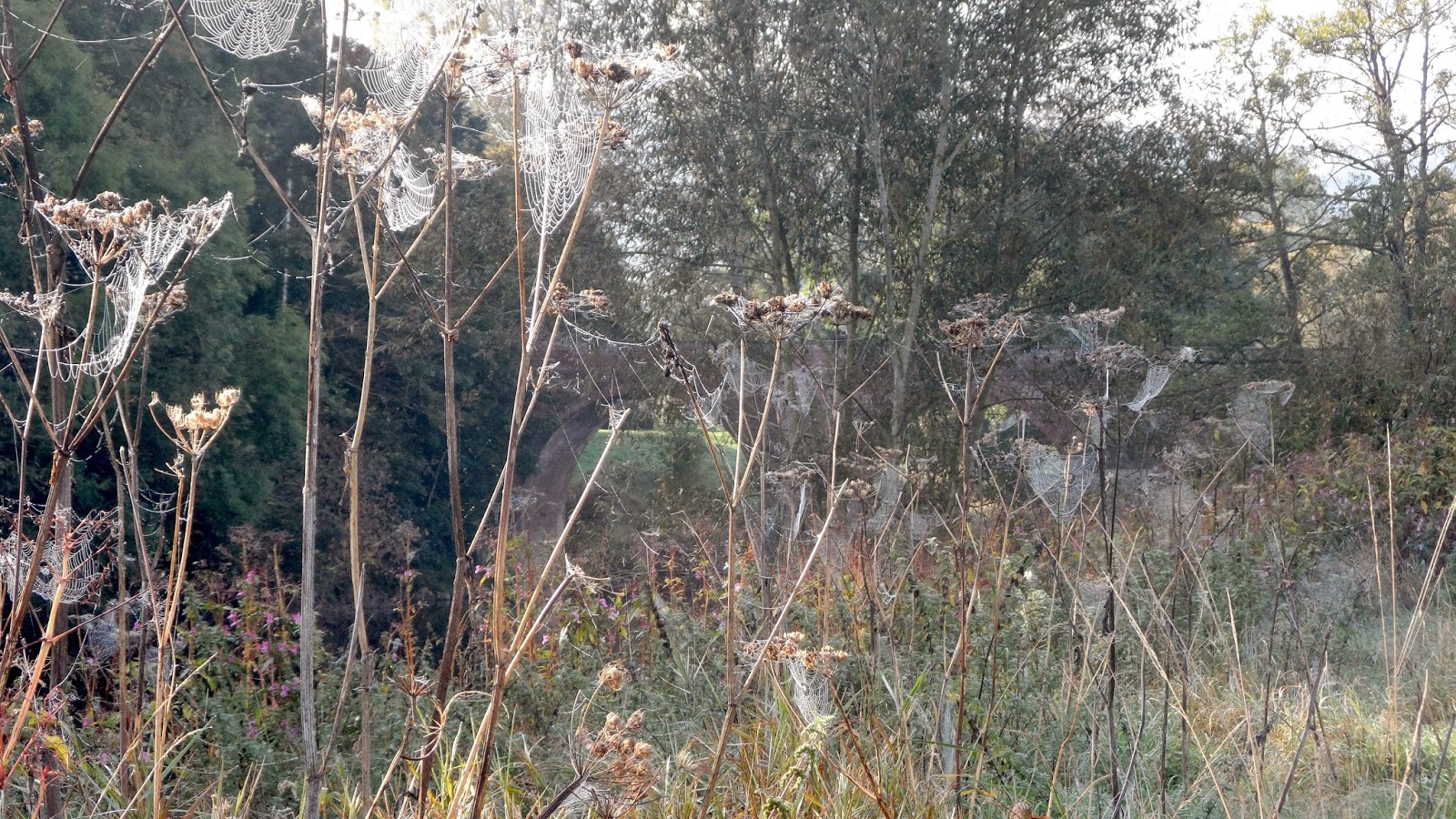 A few barbel and a lot of chub were munching on my feed when Paddy caught up and he took on the swim whilst I fed it...... for three hours. Those fish made the carp look very easy as they drifted in and out of the swim, ignoring Paddy's bait. The rig was tweaked and repositioned a couple of times and, after much work, the fish were fair tearing up the bottom. There were now half a dozen barbel feeding and one suddenly twisted away dragging Paddy with it. He bent hard against the fish that ran straight for a snag. "Don't let it go any farther..." The words had barely left my lips when the rod sprang back, Paddy said a naughty word and the line flew limp in the faint breeze.

It was time for my good friend to hit the road and head back to the edge of Exmoor. I hadn't so much as wetted a line today but felt like I had fished as though my life depended on it. It was a hard day and so close to success but, as I often say, its the ones you don't catch tat bring you back again and Paddy is already checking his diary. 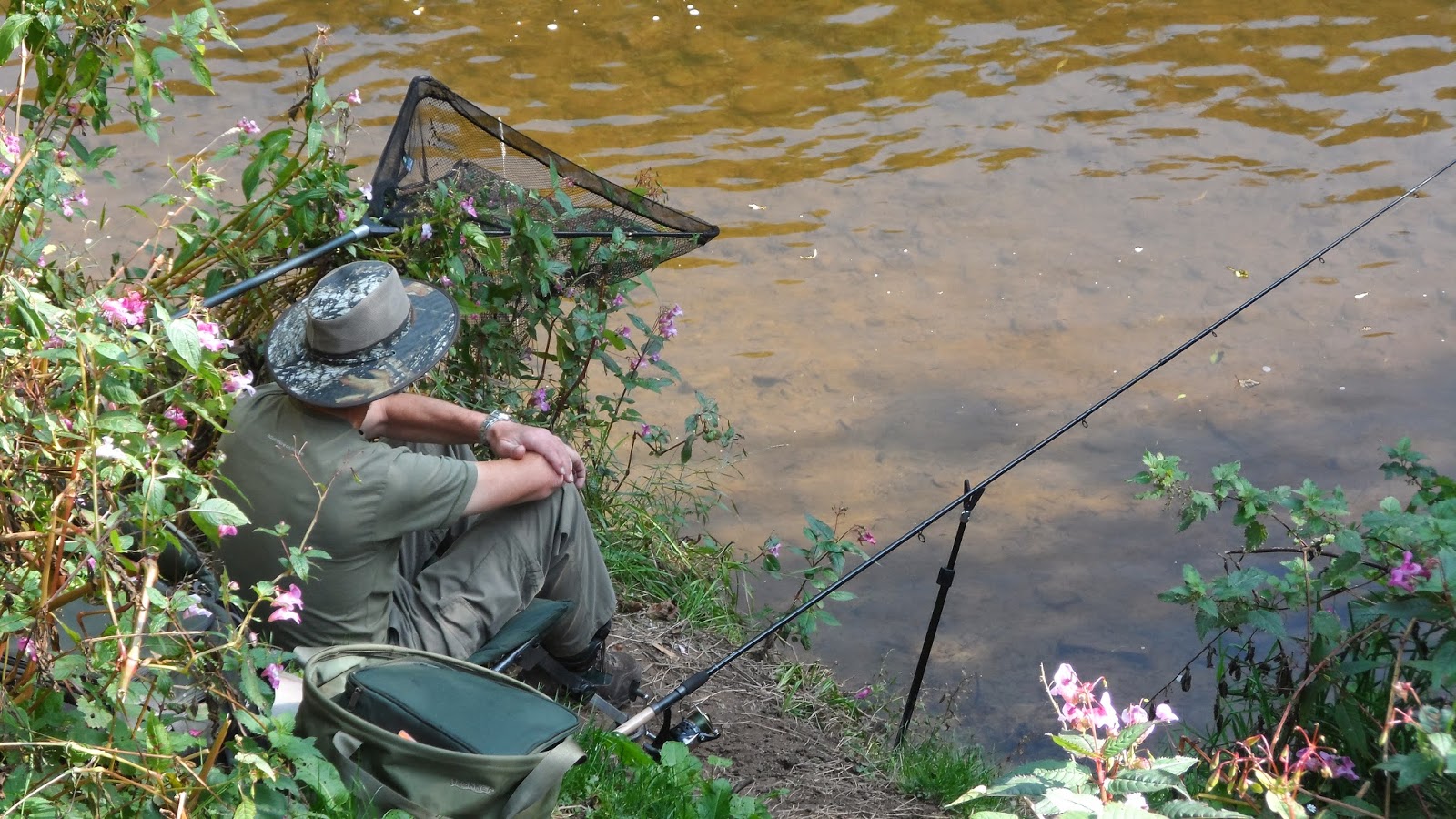