I recall the opening to a film or book in which a hardened American Detective described the process of having the third catheter of his life removed, and how he had fallen in love with the girl doing it on each occasion. As I stared deep into the grey eyes of a beautiful young nurse who was about to remove my first, I told her of the tale, she looked a little shocked. I guess I'm no longer supporting the chiselled appearance of a rough - tough cop..... not that I ever did. But when it was removed it was as blissful a release as I can recall and a definite corner was turned. Its been quite a week.

A family weekend followed a day later by a sickness bout that became painful and persistent. A doctor was called for some anti-sickness meds but an ambulance arrived. "Your heart's okay", which, to be honest was initially our main concern. They then invited me to go to Hereford Hospital for some more checks. I declined. 'I'll be alright in the morning'... Teflon Burr, shrug it off.

Next afternoon and a brief recovery is quickly forgotten and I cannot get to the GP quick enough, it is an agony that is hard to describe and the Doc claims it to be 'pancreatitis' and looks sternly at my Units per Week count. Temperance is the watch word at the local surgery and I've held my gaze to these questions before as half a bottle of wine isn't that bad.... is it? By the time I'd been bumped along the cart track roads of the Shire and had reached A&E a life of sobriety seemed an easy course to follow.

Ultra Sound, X Ray and Fingers prodded and probed at many, many places and the Paracetamol was replaced with Morphine and still I felt worse. But the NHS has no room for people that are merely in pain but are yet to receive help so I was sent home to be returned next day for a CT Scan which would probably confirm its Gall stones. Again I had to endure our dreadful roads which, despite Nicky's best efforts, are just a series of jolts and bumps joined by moans and guttural groans.

Scan done, more invasive kneading and I was ready to show a white flag. I was eventually admitted into a small ward that held a man who never moved an inch, another that never quite got the message across to a miserable nurse with an empathy bypass that he was slightly demented and very deaf and a third who was either kicking the curtain between us whilst moaning or was demonstrating his total lack of bowel control. It was a bit like sharing rooms on a fishing weekend really. I was beyond caring.

And so began my first hospital stay. The signs all pointed to a blocked bowel but the Consultant wasn't 100% certain and hung on for it to calm down in order to do more tests. Come Saturday and I had not eaten since Monday afternoon, had not had much of my medication in that time (two of which can have adverse effects on their own after just two days without), and my sense of humour had gone without leaving a forwarding address. But it settled a bit. Despite tubes in and out of everything, I gingerly nibbled a piece of toast and kept it down. Over the next couple of days a colon that had refused to even leak a tiny fart began to do its job and I began to look out of the windows where this morning, there was the most wonderful purple dawn you could ever wish for. And so came Tuesday afternoon and my catheter was finally removed and I knew I was going home. 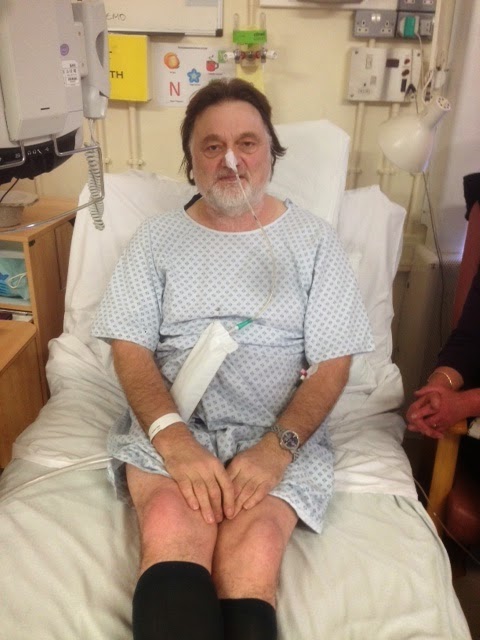 As I take stock I wonder if its something of a record to have doctors from three different continents shove an arm (well that's what it bloody felt like), up your rectum in two days. Why does hospital television cost £10 a day and the car park cost that about every ten minutes? Why also did the hospital internet connection claim that the Traditional Fishing Forum was not something that it thought appropriate and so blocked it? And why, when sleep is an important part of recovery, don't they keep a stock of ear plugs for us poor sods trying to grab a spot of shut eye in a busy night ward? They didn't even bring me some cotton wool. That said, the vast majority of staff were excellent, they really were.

As I packed to leave there were whispered words between staff members and I could see them mouthing the letters M.R.S.A. A deep clean took place in the cubical to my right and the one two over. The guy left in the middle looked very bad and I was glad that I was going and that I had not been opened up. A sobering experience without yet a conclusion.

The grayling trip? That was supposed to have been tomorrow.
Posted by Dave Burr at 20:37