The Carp, The Crack, The Snake Wrangling and the Mouse.

The trip to France with my old mate Paddy finally arrived. His anticipation level was through the roof and I was really looking forward to a week together and a few fish.

With cars laden to the roof we made our way south from Cherbourg and finally arrived at a small but very attractive pool where the fish were putting on a fins display of bubbling and occasionally showing on the top. It was mild and everything looked great. The first night was spent in the gite whilst our loose feed did it's job, all we had to do was get up and fish the next day.

It began well, Paddy had an early fish, a common of 21.11 and his personal best. He'd never quite cracked the twenty mark and here it was at 9.45 on the first morning. Happy days. I followed up almost immediately with a 28.10 mirror. We basked in our morning's success..... and it began to rain.


It rained throughout the rest of the day and into the next. I was chilled and aching so I opted for a hot shower and a night indoors whilst Paddy stuck at it taking several more nice fish including a 32lb common next morning.  We celebrated by going to the supermarket for provisions ...... and food.

The rest of the day saw Spangle bollocks take more fish and I fluked a mid-double common and a mirror that looked like it had spawned on the gravel drive. That evening I had another modest common and a low twenty mirror at 11.30pm whilst the lake was shrouded in mist and the temperature plummeted. The coldest night I ever spent in a bivvy was in France many years ago when a freezing fog enveloped us. I got out for a leak just before first light then shivered in my sack and later on the bank until the sun broke through at ten or eleven am. Yet here I was again, waking in the small hours to put socks on (I never sleep with socks on), and wrapping everything I could find around me to stop me from freezing to death.


The sun came out the next day but the wind had turned easterly.  But we still caught and Paddy went stalking. I also had a dabble in a little corner that was peppered by bubbles from feeding fish. After a while I climbed the lower branches of an oak tree. I've fallen out of the last three trees I've climbed so was a tad edgy to say the least. My tenuous foot hold was just holding me and I imagined looking down and seeing my line tighten just before I fell and did horrendous damage to myself. I looked down and yes, the line tightened! I made a safe but ungraceful descent only to find the fish had doubtless been scared off by the commotion.

Paddy hit his nirvana with a 37.08 common but I rallied with a 33.10 common later on. It has to be said that despite his previous misfortunes in the carp world, Paddy was having an absolute beano session and ended up with twice as many fish as me, catching the first, the most, the biggest and even the smallest fish. I am genuinely delighted for the lucky bastard, this break was all about him getting the fish of his dreams and he did that over and over again.


We had some fun with the wild life too. The bird life was astounding with insomniac nightingales all around us - just when do they eat or sleep? The marsh frogs were loud and entertaining. They'd respond to noises we made and begin their "All right" call - in a very East End accent, which would set the other frogs all around the lake into a cacophony of froggy chat. I initiated a few chorus's by saying "Aw roit" in my best barrow seller voice, only to get a host of froggy "I am" responses. That never got old.

We'd also been told of the local Aesculapian snake population, France's biggest reptile that constricts rather than injects venom into it's hapless victims. We were keen to see one and, one day as we returned from the shops, Andy (who looks after the lake), was leaping around something in the grass and worrying that Max, his dog, might succumb. As it slipped into cover I grabbed the snake for a better look. I've caught loads of grass snakes but they were easy and usually play dead as they poo a horrid repellant all over your hands. But Mr Aesculapian, doubtless peeved by it's ridiculous name, has other ideas and as I moved my hand to grasp it behind it's head, it turned and sank it's not inconsiderable fangs into the back of my hand. I pulled free but it just did the same again. I watched it twisting it's head to maximise the grip whilst it's last couple of feet wrapped firmly around my other wrist. It was fascinating. I've had a mild but fangless bite from brer grass snake but here was a serpent having a right old go at little old me. I quite enjoyed the experience.

At five foot plus, it was a beautiful specimen and I quickly let it go after a picture or three. Andy looked a little unsettled by the event.

Our last day was very hot and the fish took to sunbathing. We had one each but spotted a couple of lumps we'd missed out on and which topped the 40lb mark.

We packed everything away carefully leaving room for a bottle or two. I checked under the bonnet and scratched my head at the torn cover over the battery. "I don't think that was like that before" I mused and later showed Paddy but, as I lifted the bonnet, so I found the culprit - a mouse, sat in his little nest. I think I scared it off but since I've got home the damned car alarm keeps sounding - is it still there? Where's all the Aesculapian snakes when you need one? 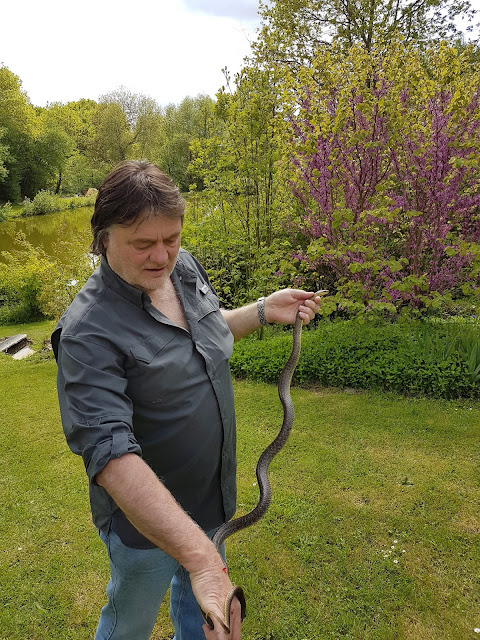