It's been so long since I had a morning tench fishing. There's just not that many tench waters around here and as my mind spends longer thinking about carp the lovely tench get's lost in the rush for a thirty pounder. But a stocking several years ago has begun to prove fruitful. The little pool was home to some plump roach and perch but they have been brushed aside by age or predation and the fingerling tench are coming on well. Time to try it out. 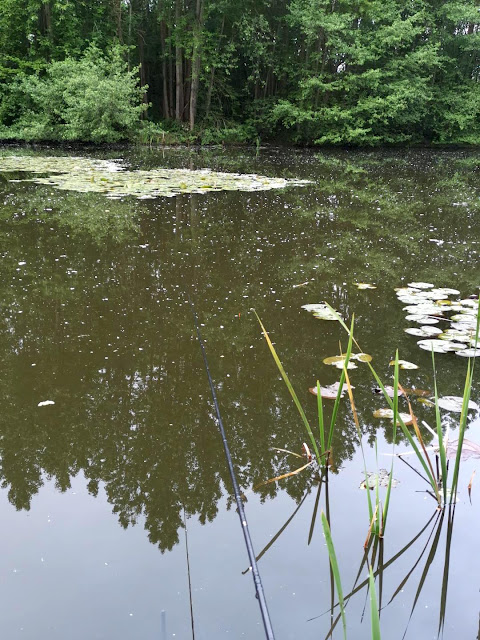 Apparently these fish are right out of Mr Crabtree's folklore in that they feed very early in the day then switch off and disappear. I didn't fancy a mega-early rise so took the softer option. I gained an hour in bed by bivvying up next to the lake overnight so I could enjoy a lie-in till about 4.45 am. The night was warm, the owls loud and, what I presume to be a juvenile owl left in a tree nearby, whined about it all night.

Cane decided that the first bird song was breakfast time. He was a little put out by the reply and settled for another hour or so until my phone ruined a perfectly good dream. I was quickly out of bed and scanning the baited swim for activity. There wasn't so much as a single bubble.

A coffee had me up and about and a single grain of corn sat below a very old and favoured float. I'd given it a coat of varnish yesterday as so much paint is missing. I sat and gazed at the little red point in the water - absorbed, content and eager.

At last, a slight bob and the rod is trembling in my hand awaiting the next movement. It came in the form of a slight lift and I struck into a solid weight. However, it immediately yielded and I was into the gnarliest male bream ever. It was adorned with spawning tubercles over its entire body and felt like a slice of concrete. However, it was a blank saving fish and was lovingly slipped back. 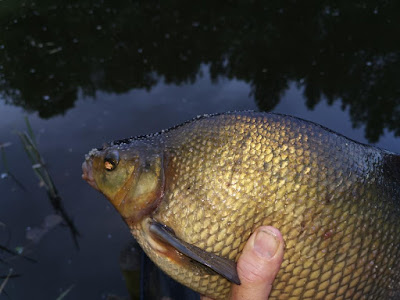 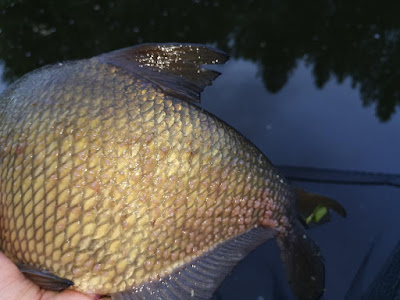 Soon after - another bite and I am connected to a feisty little fish that, as it rose in the water, looked as if it was made of coal. In came the darkest tench I have ever seen, small but beautifully marked. This was followed by another dark fish with slightly more green on her flanks. I thought it was going to be a busy morning however, despite seeing some bubbles here and there including some that looked very Crucian-like, I didn't get so much as a twitch. 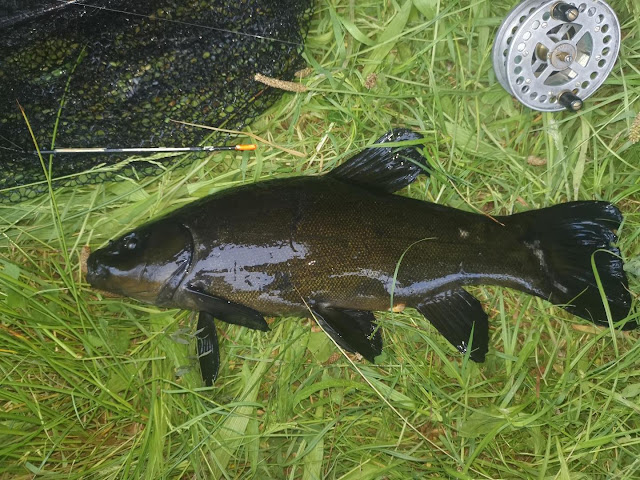 The moment had passed and that 'dead' feeling came over the water. I mused myself by feeding the female Mandarine duck and her four chicks. They were very nervous of me yesterday evening but  now they were content to take seeded bread and corn.

I popped over to the carp lake and had a wander. I found a few fish milling about and the tiger nuts I threw into a corner were soon being truffled up by a carp. But, by the time I had eaten my breakfast, sorted some gear and wandered to a suitable ambush point, the mood on here also changed. The only fish I saw were now basking in thick weed and I got the distinct feeling that they were having a post spawn rest.

I decided they deserved their day in the sun and will return in a week or so - hopefully after some rain. 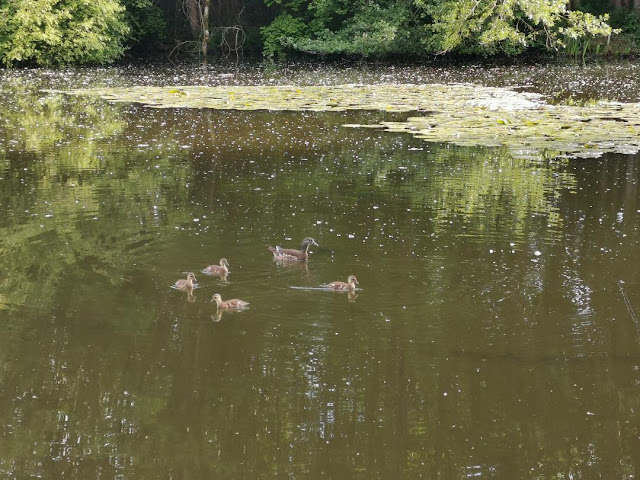