I went fishing yesterday. Not since what, October? have I wet a line and, truth be told, for much of that period, I've not been too bothered. Therefore, today, I am marking down a long overdue return to action here, in black and white.

For the record, I float fished the town section of the Wye in Hereford for the first time. I've lived here for 21 years and have just now ventured downstream. The reason is simple, a large percentage of the river's silver fish migrate to the stretch in town for their winter holiday. The water temperature there will be fractionally higher and the presence of humans help to keep predators away. I have no desire to freeze into dusk after chub and barbel but the idea of a few roach and perch has got the juices flowing.

One of the 'silver' species that enjoy the town is the bleak, lots and lots of bleak. I met quite a few of them yesterday as they chewed every maggot I introduced into the swim and then plucked and pecked at larger worm baits. I even had a sail-away bite from one that managed to impale itself through the tail root with a size 10. But, by laying on in the margins, I did manage a couple of perch. Neil did somewhat better with around ten fish, again nothing large.

It's been a while since I have fished in an urban setting with many dog walkers and joggers and such. The noisy kids in the playground opposite were an entertainment, especially Charlie. His long-suffering mother was constantly calling to the little darling, "Charlie, get off of that". "Charlie, stop fighting". "Charlie, give that back to her". This went on throughout my session. I have to admit that a broad grin crossed my face when the age-old chorus of " Fight - fight - fight..." sparked off. I was transported back to my school days in an instant. I wonder when this ubiquitous chant began? Neil offered a caveman equivalent which is probably closer to the mark than we know.

Today I am suffering from my activities but looking forward to a return.

On the subject of black and white - blackbirds aren't always black. (Can you see what I am doing here? These blogs aren't just thrown together you know).

When I was a lad, I was a regular visitor at the Taunton Museum. Whilst my brother steamed the glass cases of the large collections of military history and we had both gazed at the Taunton Giant's boot. I would be lost in the natural history section. The taxidermy always held my attention with a special interest in the birds. I was fascinated too by a large collection of leucistic (white) birds of many species. There were most of the garden birds along with warblers, finches etc. I wondered just how such a gathering could be brought together when I had never seen a single one.

At the age of ten, I was rewarded when Paddy and I were fishing on the bridge over French Weir, when a pure white blackbird flew past, hotly pursued by a gathering of mixed songbirds. It sought brief refuse in an alder tree before, once again flying off to a life of torment. For two young birders, it was manna from heaven and the image is still burned in full detail on my mind.

A few years ago, Nicky and I were driving along a narrow lane when a white blackbird flew across in front of us and through the hedge. Brief but spectacular and I feel very lucky to have witnessed such spectacles.

I am certain that you have seen plenty of blackbirds and indeed jackdaws, with the odd white feather or cluster thereof. At present, there's a jackdaw in the village that looks like it has walked under a painter's ladder and a blackbird with a brilliant white wing flash. But nothing compared to the one I photographed the other day.

I saw it several weeks ago, for a second. Then a neighbour mentioned it and said it was resident in the same area as my sighting. I headed off to look whilst on my way to check out a barn owl that feeds over a field and orchard near the church. There it was, in the same garden as before, a stunning male blackbird. 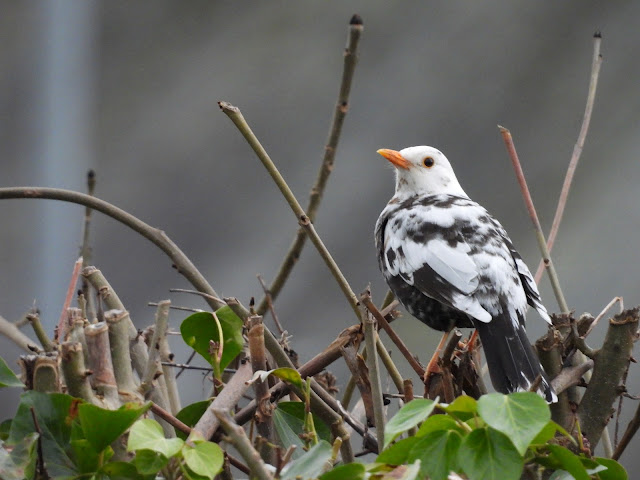 For the record, I saw the owl but the battery had run down on the camera. Maybe next time.