I think I may have to wash all my kit a it seems to have become tainted with a chub attractor.

We've had a spate, 5' of water has flushed through the river and it should be red hot for some barbel action. Its also that time of year when the fish should be moving to their summer spots, leaving the post spawning areas and spreading out. Trouble is, nobody has told the barbel.

I've fished a few different spots over the last few days and have only had chub. barbel are being caught by other anglers but I'm trying places where they should be as well as a few spots where I've never caught one. Avoiding the often fished and downright hammered sections means catching less but I don't mind, a barbel from a new swim is always welcome and counts high on my 'achievement' list. 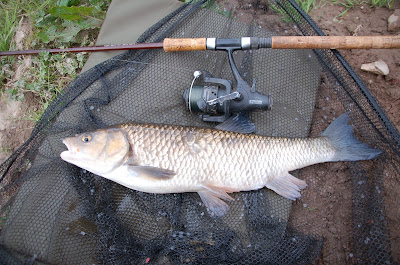 My club ticket for Hereford and District AA should arrive this week and the challenge of the Lugg awaits. Target? Barbel - obviously and I'd like a good 'un. I'd like a big chub too, 6lbs is a possibility from what I've seen and of course, there's that perch that Conrad saw - he put it at over 3ibs. Can't wait.

I lost my glasses yesterday. Somewhere between the car and my swim, across 400yards of long grass, they fell from my pocket - bugger!

Today, I decided to at least have a cursory search for them and, after twenty yards of field - there they were, slightly bent but otherwise okay. Finding stuff you think lost for ever is great, I hate the emptiness you feel when the search is in vain.

That done, I had a check around the fishery and found a car parked inside an area fenced off by the farmer. He closes half of this big field for a few weeks each summer for hay making and it is closed off with an electric fence. To stop the anglers that cross the fence (on foot) from getting a shock, we have put some lengths of insulating foam over it. These herberts said "That fence has been there for a year" (Obviously they last came in early summer 2010). Then one of them said, "The farmer closes this half of the field because there's nowhere for the cows to get a drink." I pointed out the cattle drink not 15 yards from them!
Then they said, "We thought that the rubber on the wire (insulation material) was there for us to drive over." I asked him if he had noticed there were no other tyre marks in the field?

I don't know of these guys were stupid or just too plain lazy to walk the 150 yards to the swim they were fishing but I have asked Mike (the guy that owns the fishery) if I can have a cattle prod as some people really, really do need a jolt now and again.