Where else but France

I'll come to the fishing later but that was only a minor part of the trip.

I love France, always have and see no way that my opinion will change any time soon. Despite the, so called, animosity between our two nations I have always found French people to be friendly and obliging and, I think, they seem to like us. Yes, I know that they are useless at fighting and let us down badly during the last war, I know that they help to make Euro laws but then ignore them and their football team are a bunch of cheats but that aside, I love 'em.

I driven around most of France and I always enjoy the countryside, the open spaces and the wonderful architecture be it a beautiful chateau looming out of the wooded landscape or a medieval town so unchanged that it requires minimal imagination to wonder how life was lived there hundreds of years ago. This time we passed hundreds of fields full of sunflowers, like triffids at the electric fence each facing the same way, slaves to the light. 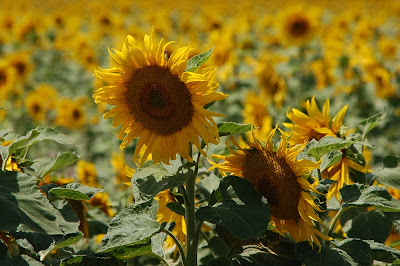 And where else can you be driving along, looking for a particular feature on a river, when you happen across the most wonderful collection of sculpture you could imagine? We did.

Just outside of Saintes in the Charente Maritime we saw a sculpted boat alongside the road. I slowed to look at it and beyond it we saw some standing statues and a number carved into the limestone rock face. There was a car park and that was us for the next hour. It transpires (from talking to one of two woman learning their sculpting techniques in an otherwise empty place), that the sculpting had been going on here for over a decade and that famous artists from around the world are invited to spend three months or so a year to indulge in the special qualities of the stone face. The results are incredible and it must be one of France's greatest secrets as even people living in the area seem oblivious to the place.

Here are a few pictures of some of the works. The scale is difficult to take in but most of the pieces were at least life size and the baby in the womb was about 10' across. 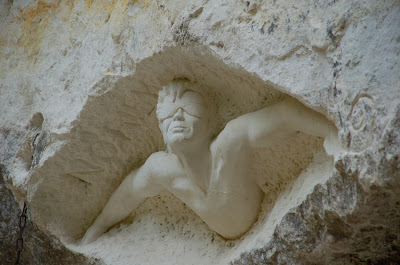 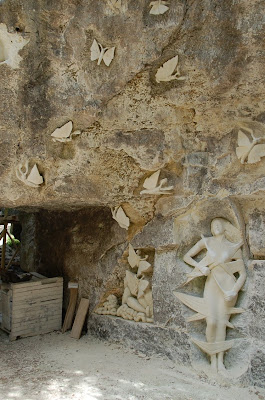 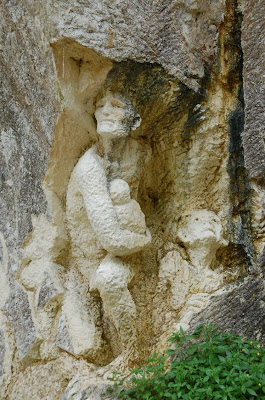 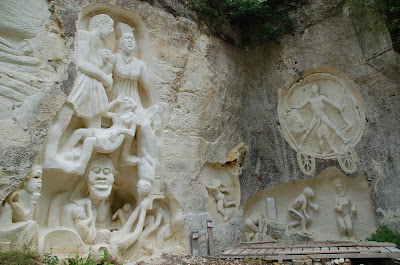 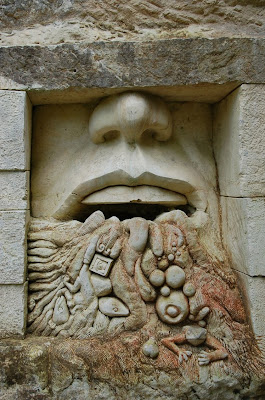 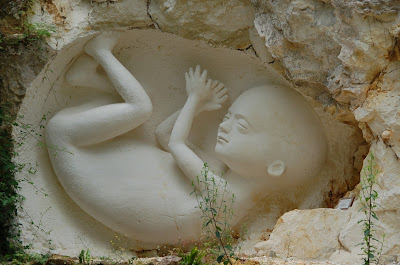 You could never do this in the UK. For one thing, it was open and unsecured. At home, I am ashamed to say, the pieces would have been damaged and daubed in graffiti. What is more, it was a work in progress and we walked through a small quarry, under overhanging rocks, through tunnels and around a wobbly wooden scaffold that the artist stands on. What? I hear you scream, without a hard had, fluorescent jacket, torch, and a safety rope? Yup! And neither of us got crushed, fell or died. At home this place would have the 'what if' health and safety loonies running around in a frenzy. Another massive plus about the French - a modicum of common sense.

So our holiday was a success. We camped for the first time in years and, apart from forgetting the air bed! everything went smoothly. It was hot and we were so relaxed, any thought of serious fishing seemed too much like hard work.

But I did a bit. Not in the Loire as I couldn't find it! The drought has hit central France hard and this mighty river is, in parts a trickle...... 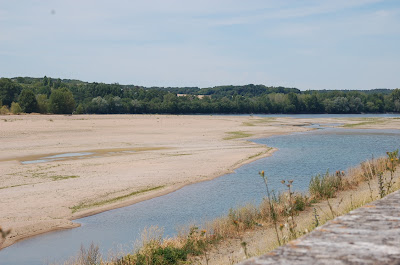 So we headed south and stayed between Royan and Rochefort where we camped next to a 4 acre lake. I fed the area outside of the tent. It looked very good with about 6 - 8' of water overhanging trees and some fallen ones in the margin.

Next morning I baited again and, when we returned later, I had a cast. Alas my first effort failed as a fish took me straight into a snag despite me hitting the run very early. This had taken about twenty minutes from casting in so, I figured the chance of another take was high and, as I started to sort the end gear again, I lobbed some pieces of bread just out from my position. Two minutes later a fish started to take them. I don't need a second invitation in these circumstances and bit off my rig and tied on a size 6 hook with a big lump of bread on it.

Thirty seconds after lowering the bait it was taken. The fish, a common, gave a really good account of itself and was in mint condition. It went 19.03 - job done. I packed up and opened a bottle of red. 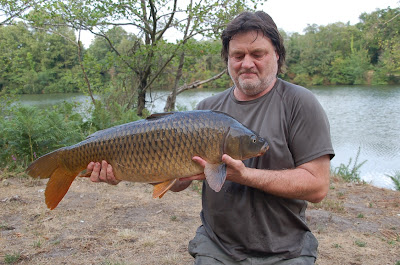 Next day I sneaked down and lobbed some more bread out. It didn't take long and a couple of fish started to suck down the pieces. One was a half decent mirror but, when I lowered my bait, it was slurped down within 5 to 10 seconds but and very athletic thirteen pound common.

I again rested the swim, topped it (and another) up with a few more boilies and relaxed for the evening.

On the next day I decided to go for broke and try for a decent fish. Don't get me wrong, I was more than happy with two off the top but I wanted to see if there was anything else to be had. I'd only seen a few single or low doubles cruising elsewhere on the water. I set up two rods and cast them between the two fallen trees. I hunched over the rods, hot and uncomfortable, waiting..... ready to hit the first sign of a bite. Bites came alright, lot of them and, when I eventually hit one, it was from a diminutive Poisson Chat. To those of you unfamiliar with poisson chat, they are small catfish perhaps better described as three large spines joined by some meat and fins. They are veracious feeders and the bane of all French carp anglers.

I moved back to the front of our pitch and cast a rod under the overhanging trees baited with a (allegedly) chat proof Rosehip boilie. A bite came some half hour later and I had a right old tussle with a powerful fish. It was a mirror (the one I saw before?) and went 22.13. Although it is small by French standards, I was happy with that. 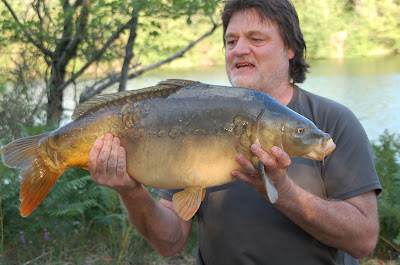 After this capture the lake went quiet. No more fish would rise to bread and the fish that had rolled near the snags stopped doing so. I tried again on a couple of evenings but the lake floor was paved with poisson chat that could reduce 20mm rosehip boilies to the size of a sugar cube in about ten minutes. I think my feeding had drawn them in and driven the carp out.
Not to worry, I was so relaxed I just happily watched the water and listened to the myriad of bird song.

We spent our last couple of days in Honfleur and, as I shut the car boot having packed everything away, it started to rain. Very timely. Our last night was spent in a luxurious chateau before the long drive home.

Sitting overlooking a little port whilst eating moules mariniere and frites, sipping on a cold draft beer and people watching. All just memories now but I'll be back again in September. It will be cooler and my fishing head will well and truly be on.
Posted by Dave Burr at 12:29