Great things these blogs, you get to pick up on news, events and the odd book review. Dear old Monty gave Chris Yates' new book 'Nightwalk' a mention, a book which had somehow slipped below my radar. I was straight on to Amazon with the intention of giving it to Neil as a gift but when it arrived I opened page one and have been reading it since. Chris has a wonderful gift of observation and language, to be honest he could write about gardening or decorating (two of the chores I hate most in life), and I'd still be enthralled.

I once borrowed Chris' fountain pen, it was like holding Excalibur or Harry Potter's wand as I wondered what magic had flowed through that nib.

Anyway, to fishing. I didn't do any last week as Nicky and I took the opportunity to take a freebie break in a caravan in Somerset compliments of our dear neighbours. Sitting in one of a million identical caravans is not my usual idea of heaven but I could not question the size or quality of the accommodation and it was an ideal base to explore some of our old haunts which mainly consisted of Clark's Village a retail outlet where Nicky indulged in some serious retail therapy and I got familiar with a number of benches on which I sat and read a newspaper and did the crossword.

But yesterday I escaped and grabbed some gear together for a stalking session at the lake. As I arrived I was surprised to find a stiff breeze pushing against the dam on the Western edge and could see muddied water along one bank - spawning activity?

I am not one that would angle for spawning fish but I had a look in a couple of spots and when I saw a decent fish's tail wafting in the dirty water, I read it as a feeding movement rather than spawning activity so sat there for an hour or so content that I was in the shade as the sun beat down. I dozed in the heat then heard a couple of splashes coming from closer to the dam so I had a look. There the water was thick with silt and the dorsal fin of a large tench waved above the surface as she tried to rid herself of the last few eggs. This continued for fifteen minutes or so during which time a couple of carp head and shouldered in very much 'feeding' action as they were no doubt gorging on the spawn.

I was using my little stalking rod which was quickly cast to the spot where the last fish rolled loaded with a pva bag of crumb and pellets, the hook armed with a DT boilie and mini white pop-up to give it some colour. It didn't take long, off it went and I was into a lively carp that headed for the thick reed beds. My short rod is more than a match for pretty much anything, it gives me so much leverage. I've used it many times for close-quarter fighting with carp and for bullying pike to an ounce under 20lb on wobbled baits so this little scamp had no chance. On the bank an oddly shaped common with a slightly deformed look about its tail weighed in at 14.06, I was happy enough with the result. 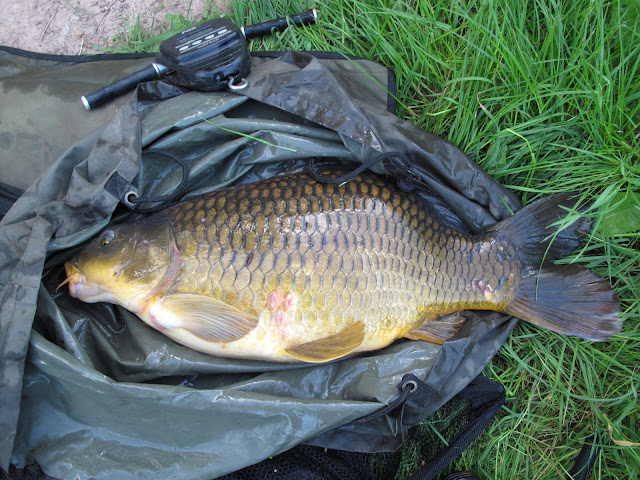 Fish continued to roll for the next hour or so but I only had one abortive take and hooked another smaller fish that dropped off near the bank, I have no idea what it was.

I ended up 'stalking', which had been the original plan, and found a couple of upper double mirrors slowly cruising and sipping insects off the surface. I had no surface baits with me and my line was fluoro coated and sinks like a stone so I just watched them for a while and, deciding I was satisfied with my few hours entertainment, I headed home.
Posted by Dave Burr at 11:09