I've come across a couple of interesting sights on my ramblings of late, those little moments that turn a mundane stroll into a memorable event. The two young foxes that stopped their romp to stand and stare as we walked along the woodland path. One of them quickly melted into the undergrowth but the second stood and nosed the air as Nicky and I froze and observed from less than thirty yards away. Eventually it became either suspicious or bored and leapt silently into the bushes and vanished. Beautiful creatures in their natural environment, so much softer looking than their often mangy urban cousins.

On our way to that walk we stopped on the dirt track to take a look at a natural phenomenon that I cannot remember seeing before - a bee swarm. Wrapped around a bough this heaving mass of life looked fascinating and I felt an urge to touch it but decided that maybe I should just observe. I remember my mate Carl Salter almost having kittens as I approached a bee's nest in a tree, the whole trunk buzzed as thousands of workers went about their business but I just had to get some pictures with Carl in the background clucking like a nervous old hen. Well, if he'd seen me getting up close and personal with the swarm he'd have pee'd his pants and as the air grew dense with agitated insects I retreated to the car. I'd love to have waited for the swarm to move, now that would be an amazing sight. 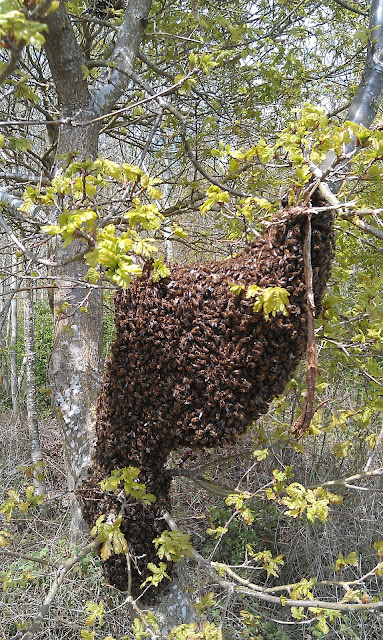 Slightly more benign was the mass movement of water snails I found in a Sedgemoor drainage ditch. I've seen snails floating in the past and have read that they will move en mass at times and here they were right in front of me bobbing along just under the surface reaching out with their entire bodies as they tried to grab at weed stems. Quite what promotes this behaviour I have no idea but I suppose it does ensure a good spread of the population. They are prolific breeders water snails, when I had the tadpoles in the tank I found three little snails in with them but by the time the tadpoles had all been sent hopping to freedom the inside of the tank and every surface within was festooned with their eggs.