The rain started as we approached the dam, light drops that barely rippled the surface. I got out of the car and had a look around, Nicky sat still and scoured the surface spotting the first fish roll. She had predicted that I would catch and that was good enough for me, she is rarely wrong in her predictions but I was not happy with this spot even though there was activity. Some fish stirred the mud next to the reeds whilst others cruised in pairs, although there was insufficient activity to declare that spawning was underway, indeed it may have happened ages ago but, I was uneasy about fishing there just in case and should somebody have seen me there and interpreted it as my trying to catch spawning fish - well, perish the thought.

It was only 2pm, plenty of time so we went for a look see. The wind was blowing away from the dam so we followed it until I eventually spotted a couple of cruisers half way across in the 'arm' of the lake. I dropped a pva bag of pellets and crumb on the spot with a pop-up on the hook but before sitting back I couldn't help but feel drawn to the overhanging tree to my left. I rigged up my stalking rod and lobbed a couple of boilies just next to the branch that almost hung in the water, as it hit the surface so a fish spooked and boiled from the same spot. Ah well, at least my instinct was correct and there had been a fish there, maybe it will come back. I spread a little bait around the area and put the second set of banksticks and alarm together and lifted the stalker onto it pulling a little line off as I did so, I had a strange sensation that felt like the line tightening, could it be.....? I pulled a little more off only for it to be snatched from my hand as a carp bolted.

After a really good tussle amongst the overhangs and tree roots Nicky slipped the net under a nice mirror a few ounces short of 24lb. Told you she usually guesses it right. 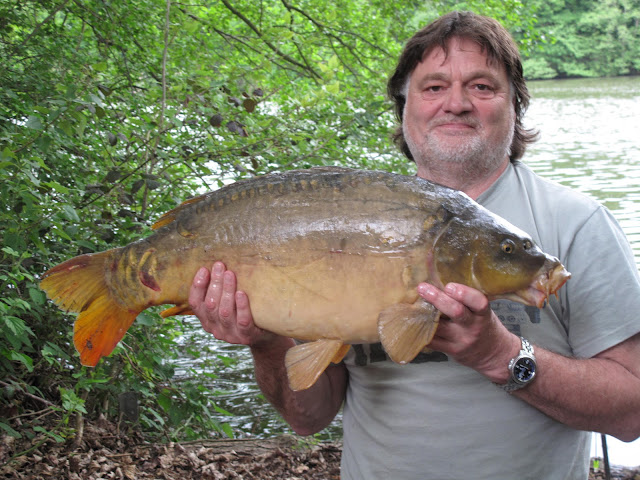 I'd prepped another swim and had a look there, the water was muddied from fish truffling through the silt to get to the morsals I'd spread there, a move was in order. We sat beneath the shelter of alder trees watching the rain become more determined, the drops pooled in the canopy until they fell heavily on and around us causing leaves to shudder as they were hit. The lake became very quiet, even the bird life had retreated under cover although the swallows and swifts continued to search for insects despite the poor conditions.

I began to suspect that the silt had been disturbed by bream rather than carp as little patches of oily bubbles began to appear and head toward my swim. I took a look with my Polaroids and saw a fresh cloud of brown silt near my bait, it wouldn't be long, then my bobbin made a stuttering climb toward the butt ring. The strike was a failure, the double boilie bait too much of a mouthful for a bream and I came back empty handed. 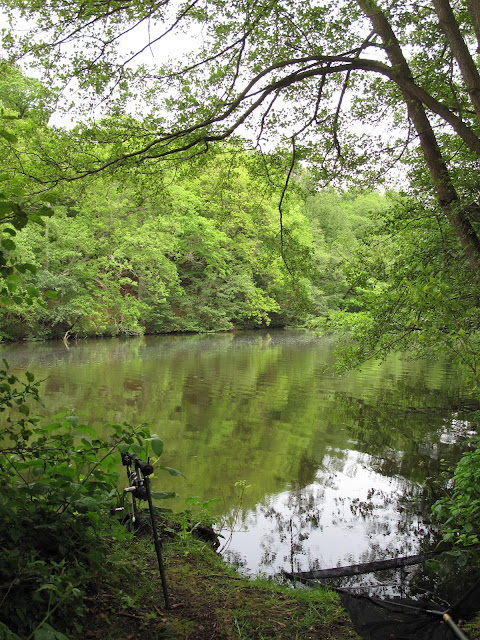 Despite trying again the magic had passed. The rain had stopped just the last few heavy droplets falling beneath the trees and a skylark heralded the passing of the shower. The air was full of the fresh smells of damp foliage but the rain must have chilled the surface and nothing showed on the lake. It was now 6pm, a short trip with a nice fish and plenty to watch on the water, job done and home we went.
Posted by Dave Burr at 20:16