The lake looked smaller when I arrived but, over the years, this is a phenomenon I have recognised with water, they shrink with familiarity. I feel very comfortable by the lake now and although I have still only lightly fished its waters I have a much deeper understanding of it. I don't think it can ever shrink beyond the size of a challenge and the mystery has just deepened, more of which later.

Neil and I are bursting at the seems to get started. Like a kitten with a bow on a string spring has been teasing us, snatching any glimmer of warmth away just when you think its arrived. Although the sun shone it was cool in the breeze, Neil borrowed my fleece, he doesn't have the protective blubber I possess - but he's getting there.

The walk around was more a gardening expedition than a fish spotting trip, despite the bright conditions the fish are still keeping out of sight. But the mini work party was a success, we have identified a few little ledges low to the water on the wooded side where a bait can be fish amongst the overhanging trees. All that was needed was lop here and a saw there just to remove those branches that might hinder playing a big carp but not enough to put them off visiting these secret spots ;-) 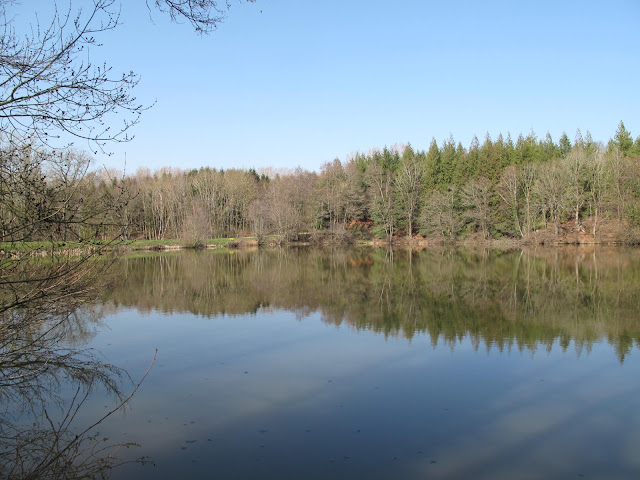 The woods were alive with birds and they at least have ignored the conditions and are getting on with the business of procreation, we watched as a pair of great spotted woodpeckers copulated, the male flying immediately away with a 'cheep', the female sitting, taking in the moment before setting about her nest building - we're not so different are we.

We bumped into Ian and Dave, a couple of fellow syndicate members who were similarly armed with loppers and saws. Ian had the extending loppers and was ensuring a long cast could be made without taking half a tree with you, a job very well done.

Ian recalled his best trip of last season when he landed a 27, 28 and a 29.15 (no matter how much he shook the scales) in the same session. This is impressive fishing but it was what he spotted on a walk around the lake on the same session that enthralled me. In a bay with very limited access, a spot where some good fish are usually visible, he saw a fish that dwarfed the rest of the residents. Having returned three near thirties he was in a great position to identify what was clearly a very big fish and it has reinforced the rumoured tales of an original mirror that was lost in the early days of the syndicate, a fish of about forty pounds.

Is this just one last monster or are there others? I've spent many hours observing the fish and have yet to see anything that really stands out but one thing that these old warriors can do is hide and with relatively new fish greedy for bait they will be very difficult to tempt. Our eagerness to get started just went up a notch.

My kit has been if not sorted then thrown into a useable heap and in the morning I'll dig out all of the bits and bobs needed to cook and survive for a few days. I'm going fishing.