Something for the weekend...

Its the first day of Spring today...... apparently. The Spring equinox is here again and the weather forecast over the next few days is for yet more cold weather and snow. Ah well, when the season does eventually arrive I reckon its going to do so with such a rush that it will be spectacular and memorable. Incidentally, the fish in my pond are looking for food so their body clock's are on time and I shall be chasing their wild cousins very soon.

But whilst the conditions keep you at home why not buy a good book and bury yourself in someone else's world for a while. I have a fair few angling books - well, hundreds I suppose, my book shelves groan at their weight and there's more dotted around the house, I really must count them one day.

Amongst them are books that have disappointed, mainly it has to be said, carp related books that others have eulogised about but I have found poorly written or just downright dull. Thankfully many of my dusty books have brought me immense pleasure, a few have even been read more than once surely the ultimate honour you can pay to the written word. I should like to recommend a couple of recent acquisitions that have rated 10 out of 10 in my humble opinion.

A Fool And His Eel by Mark Walsingham 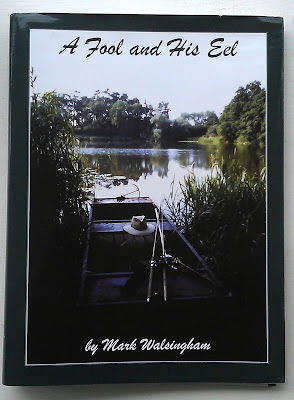 You may struggle to get hold of a copy of this book but it is well worth the effort. Despite the esoteric choice of title this book contains no fool and very few eels yet it is one of the finest fishing books ever written, sort of a Casting at the Sun for the 21st Century. Mark is an intelligent and literate man with a wealth of angling experience, mainly after carp it has to be said but other species are well documented in a beautifully written account of his angling life, his progression to being an advisor to the National Trust not to mention owning and running Ashmead fishery in Somerset, the home of natural UK carp to over 50lbs.

The pages just fly past with tales of old English lakes where ancient fish hide, his traditional approach to tackle and methods that he uses to great effect and the making of a superb fishery out of a pool he used to fish as a child. The book is illustrated with countless photographs and illustrations of the highest quality, it really is one that you won't want to end and that you are bound to revisit.

The View From Coal Creek by Erin Block 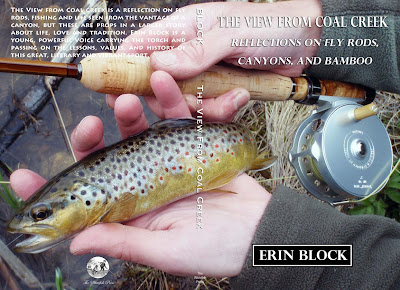 Many of you will be familiar with Erin's work as her blog is very popular. Erin burst on to the scene a couple of years ago when she began to follow just about every fishing blog going. Who was this American girl taking an interest in our fishing world?

Anyway, those of us that reciprocated and read about her life soon got to know a strong willed (okay bloody minded) individual who was rebuilding her life having moved to a cabin in a canyon despite the possible pitfalls that would challenge her. As good fortune would have it she found herself, a dog, a man and fishing.

The View From Coal Creek is an intelligent, insightful and beautifully observed look at her own life with the birth of a split cane rod as the central character. Anybody who has ever used or even considered using a cane rod would do well to read this book if just to understand the birthing process, no rod had ever been better described. The observations are top quality, any book that contains the line, "...... said Hal in the good humour that comes with time" gets my vote.

By the time the rod finds its way into its bag you will be familiar with the whole cast (no pun intended) and feel as though you sat in on its building and listened in on the gossip at the tackle shop. You will sense just what a special person Erin is and how she has a stature far greater than her frame. You will also yearn to walk the mountain paths to cast a fly in a clear stream to some diminutive but vibrantly patterned trout.

This is a definitely not a fishing book in the traditional sense nor is it a lengthy tome but I found it an immensely pleasing read.