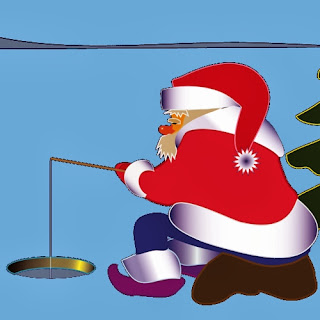 - is something to write about. It really has been slim pickings over the last month or two but hey, fishing isn't compulsory and never should be, what I don't do now I can make up for in the future.

I did venture out with Neil for a spot of pike fishing a few weeks back. The plan was for an early start but Neil couldn't get there until after lunch so I decided to wait for him. We opted for a lure fishing session and started bombing the river in a promising looking spot without a sniff. Moving to one of my favourite pike haunts, Neil took the box seat and had a follow second cast. I had to listen to his description of the fish's size and this was repeated when next cast he hooked it albeit for only a second or two.

Regaining some composure he continued to work his way through the lures I'd brought along which were mainly spinner baits of varying sizes and he soon reported a follow from a smaller fish. Meanwhile I didn't see any fish at all, not there or in any of the numerous swims I tried.

We had a think and moved a few miles to another productive spot. Again - nothing, but a few yards upstream is a cracking swim but, as the bank was steep and slippery, I gallantly stood back to allow the boy the pleasure. Two casts later I had to descend the slope to photograph a fine river pike of 13lb 8oz. I was delighted for Neil as pike have long been a bogey fish for him and this was his first from the Wye despite several attempts.

Getting up the bank was a difficult but hilarious experience and we called it a day. 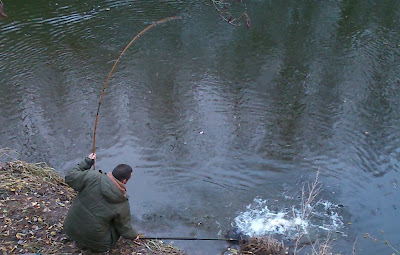 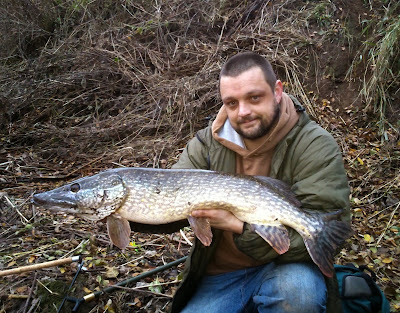 I went to the spot where the two fish followed Neil's lure a day or two later but couldn't raise any response. As I thrashed the river to a foam I thought to myself "Why didn't you just bring some deadbaits?" And promised myself a change of method next time out.

A day or two later that old poacher Paul Ashton contacted me to say that his pike season had started with a flourish and that he had taken a fish of exactly 20lbs and one of 10lbs 4oz. I wonder if you can guess which swim it came from?

The back was playing me up for a while but I did promise myself another go as the low, clear conditions made pike, chub and grayling all catchable. Of course it rained overnight and I didn't fancy the slippery banks and the river was starting to rise, it could wait a day or two. Since then the river has come up and up and......

I have a grayling day booked for early January and a day with Dave Steuart in February and will doubtless find a moment or two to spend at the waterside in the mean time. There's even talk of another trip to a French river next summer but more of that later.

Its been an odd year for many reasons and it looks like 2014 will continue in that vein, I hope that a few fish grace the net or that I fall in often enough to keep you entertained.

Enjoy the Christmas period and thanks for taking the time to drop in.