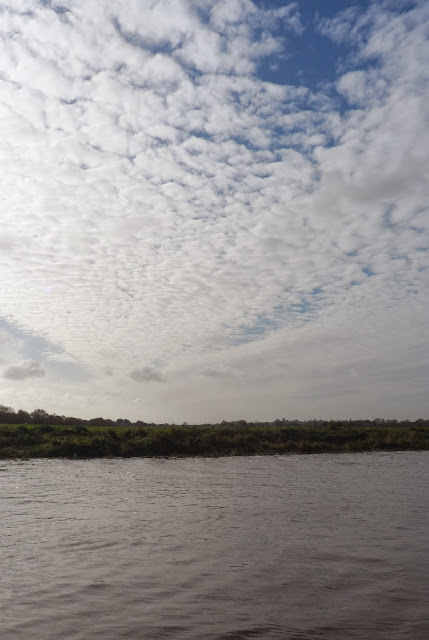 I've always held an affinity with Sedgemoor, its an atmospheric area steeped in a history of civil war, Judge Jeffries, bloodshed and attrition and long before that the legend of King Arthur and Camelot. But my inner feelings seem separate to the troublesome past, I feel 'at home' when I'm on the moor, a feeling that Nicky shares, we really did think we'd live there one day but instead we have been enticed by the spectacular hills and mountains of the Welsh boarders and its most glorious of all rivers. My family name a generation ago was Mears and surely emanates from a watery past, maybe my ancestors eked out a living on the black peat soil of Sedgemoor, my fishing instincts may be born from an ancient necessity rather than a modern pass time.

I'd have got there sooner but for a motorway journey from hell where it took over two hours to travel just two and a half miles but arrive I did. I was greeted by my old mate Bunny, now well recovered from his knee operation and ready to get his boots dirty again. We went out for a meal, put the world to right and slept soundly in anticipation of a day on the Kings Sedgemoor Drain. 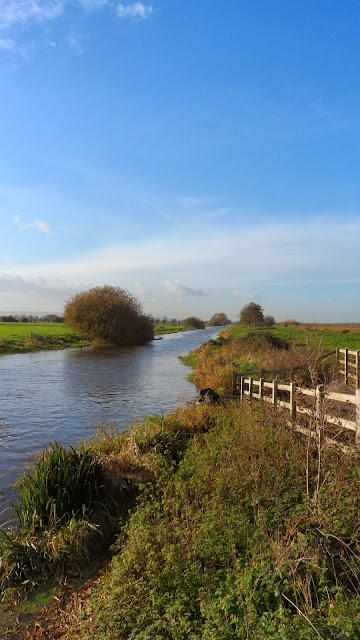 I travelled ahead and was at the drain quite early. As I sorted my gear a couple of Polish lads arrived and gave me a sideways look as they nipped into the outlet of the sluice, my favoured spot. I had a chuck or two in the bridge pool and noticed that they were not working their way down the drain so I went past them for some spinning. I was using a Scotty 7' spinning rod married with my Hardy Exalta reel. I opted to use this rod as I thought I'd get the usual little jacks this area always used to produce, should I want to up the lure size or go after some bigger fish I had a carbon lure rod with a multiplier reel.

Three casts later and a flick upstream with a slow retrieve of my spinnerbait saw a gentle take. I hit it and at first thought it was the expected little chap but I soon reassessed the situation as the little rod hooped over and a decent fish charged off. I had to net it due to the marshy banks and an eleven pound twelve ounce pike was landed, the old cane twig performed magnificently. This impressed the Polish lads who came for a look, they'd been trying elsewhere for three hours without a touch and my immediate success was alarming to them. One said something about a photo but I assured him I appreciated the offer but I was happy with a ground shot, he then continued and I realised he wanted a trophy shot of his mate holding the fish! I obliged then slipped it back into the dark water of the drain. 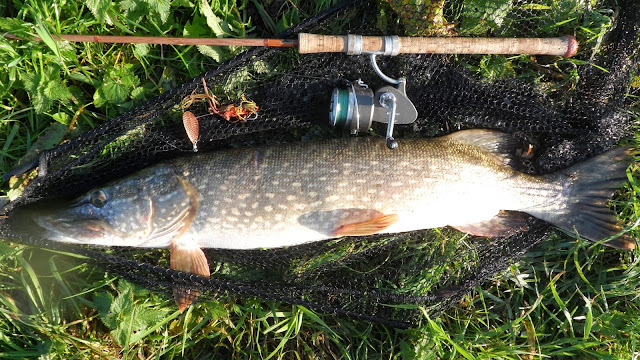 Expecting Bunny and Paddy to arrive imminently I went back to the bridge pool by the car park. I bided my time with a few casts and changed to a plastic shad to get a bit deeper and bang, pike number two and a seven pounder was chinned out. Of course I got hit by the thrashing fish as I went to lift it but I always think of a day piking as one spent giving blood, its just part of the game. 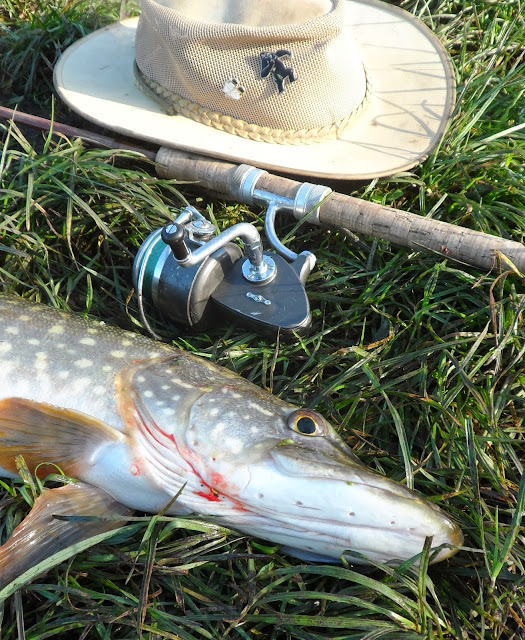 The blood is mine!

Paddy arrived first and was eager to spend the day spinning, he set about it with his usual enthusiasm and soon lost a fish on the take. Bunny was fashionably late but then he always takes a while to get up to steam and having to return for his maggots didn't help. As he got himself sorted I tried float fishing the sluice but soon lost interest due to the extra water and swirling current making it tough work.

Paddy returned from his fruitless wanderings and we gathered for a brew and a sample of Bunny's cakes, I have to say he does cook well and the lemon tray bake and fruit cake were excellent. Duly refreshed I went with Paddy above the bridge to explore with the lure rods. Paddy took the hot area that usually produces the goods whilst I moved a few yards farther on. I swapped over to that old classic an Ondex and soon had a violent take that nearly took the rod out of my hands, a six pounder fought beyond its weight and was slipped back. I told Paddy I wasn't going to fish there any more until he'd caught so I went back to the bridge pool and set up a float rod whilst lobbing out a freshly dispatched roach on my nine foot Scotty salmon spinning rod and Scout centre pin.

Paddy ambled back down to the sluice bemoaning the lack of action whilst Bunny and I steadily caught loads of small roach, skimmers and perch. An urgent call from Paddy had me heading downstream, I got there just in time to see him swearing at the sky. A pike of about 12lbs (that would have been his pb) had managed to leave the hooks in the net whilst getting free. I offered my sympathies.

Soon after returning to my pitch I had another fish of about six pounds and immediately passed the news on to Paddy - coz I'm like that. 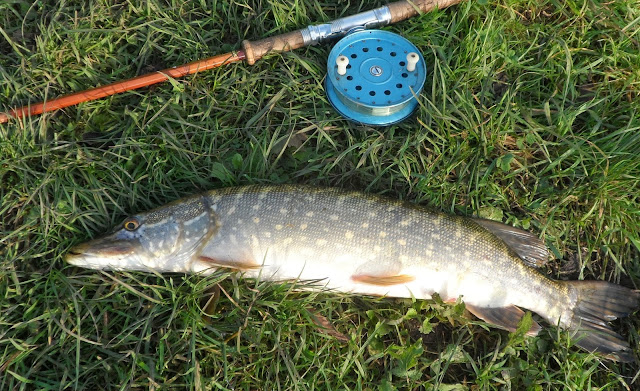 I was also delighted, as he returned to his car for an early finish, to tell him about a fifth at the same sort of size a little later, the poor soul was on call that evening and had to be at home and retired with a blank. It has to be said that where pike are concerned Paddy has never made the connection, they just don't like him I guess. I always seem to conjure a pike or two even when those around me struggle, I wish I was like that with big perch and roach.

Bunny and I finished the day with more fish but I had to break off to record the sunset. As the sun dipped so the starlings came by, six waves each containing thousands of birds. As they passed so you got the impression it was coming on to rain as droplets of starling shit drifted to earth, the amount had to be seen to be believed. We also spotted lots of lapwings, one flock being escorted by a marsh harrier. The sedge beds behind us are now home to great white egrets, cranes, bitterns and bearded tits along with a wealth of other bird life. 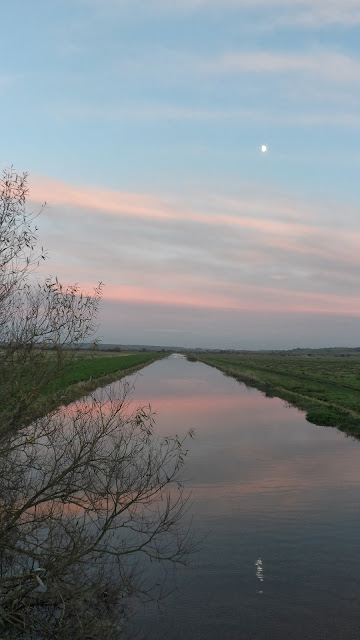 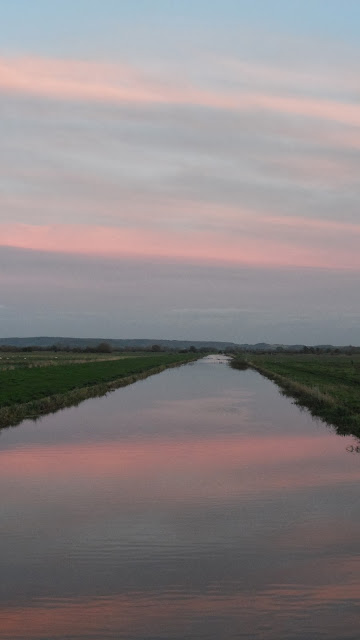 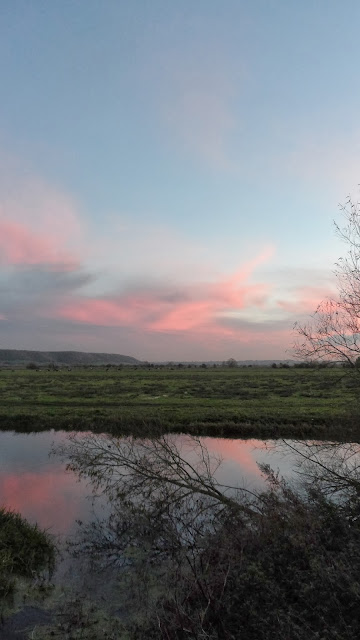 Day two was something of 'after the Lord Mayors show' as the pike refused to play. We still managed a good catch of bits but lures were steadfastly ignored. I had a token deadbait out for a while until mid afternoon when I had a deep urge to change to a livebait. I get these feelings when I'm pike fishing, it must just be the change in weather or light conditions but when I feel this compulsion I know to act upon it. I landed a four inch roach and quickly attached it to the single circle hook rig that had worked well the previous day. Out it went near the bridge wall and I walked the rod back to my position - looking up the float had gone. Expecting it to be me pulling on too tight a line I eased off some slack but it stayed under. I wound down and tightened into a heavy weight that released all too quickly and I retrieved a roach minus a lot of scales. With that the moment had passed and I didn't get another twitch from essox. 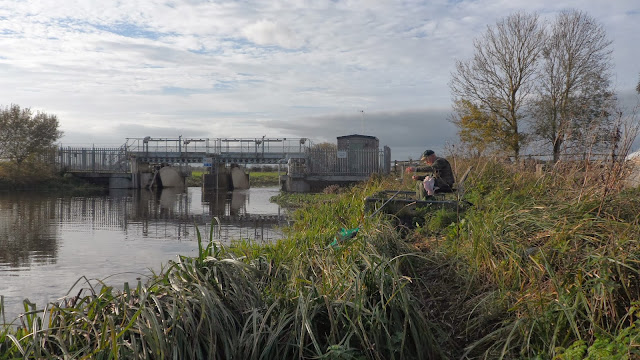 So ended my trip but before I left I cut a few sedges to dry over the next few months for float making. I thoroughly enjoyed my brief visit and am eager to return, I want to fish with Bunny again soon and watching Paddy blank never loses its novelty. The atmosphere of the moor is unique and always leaves me yearning for more. Although we fished next to the thrum of the road a short walk up or down stream puts you far enough away to melt into an ancient landscape and to feel isolated yet secure. I also want to make a winter visit to Shapwick where those incontinent starlings murmerate in their hundreds of thousands before dropping into the sedges for the night, as spectacular a vision of exotic wildlife behaviour as can be found and one that I have missed seeing for too long.