Season's greetings to you all. Hope you've had a good one.

What is going on with the weather? I went fishing today when it was 12 degrees! Twelve bloody degrees on December 27th Its mental! Yesterday I found Lesser Celandine flowering in the lane. Celandine is my 'look for' flower at the tail end of winter as spotting it generally indicates the first day of spring but December? Madness. Of course, a sting in the tail is inevitable and when it comes we could be building snowmen in June and wondering why the tench bubbles have all frozen on the surface.

But, when you are dealt lemons make lemonade. And with that in mind I headed off to Curlew Minor armed with a few dog biscuits and an ancient Hardy fly rod. I did have a peek at the Wye on the way and decided I was wise to avoid it's allure for the sake of my own good health as it certainly looks like heavy going all along the banks and surrounding fields.

At the pool I made a quick and somewhat disappointing discovery - the dog biscuits sank. I'd also put some little Iams food in (stolen from the dog's bowl), which did float but which would never support a hook. Hmmm what to do? A little more experimenting and I found that the disc shaped biscuits in my bag did float - just, so I picked a few out and along with some Iams, lobbed them into the light ripple to float toward the reeds where there would surely be a few small carp. I then turned my bag inside out looking for something that floats. I found a couple of grains of pop-up corn and hooked one on a small hook. It just about gripped the surface but was difficult to see in the water. 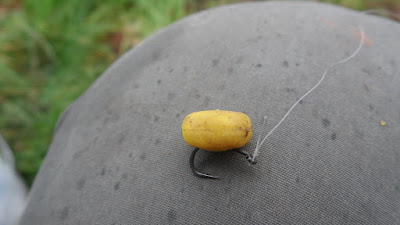 By now the first few fish were greedily sucking down free bikkies and, with a spot of light feeding, they were well at it in no time. I made my first couple of casts and soon had my little yellow speck more or less where I wanted it. A pair of lips appeared and I was fighting my first carp on a fly rod. It was soon landed, a little scrapper but I felt like I'd won the big end of the cracker. 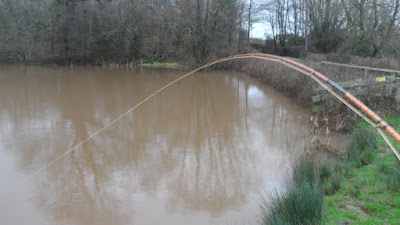 The others were back on the feed and I soon hooked something that set off holding deep until the line parted at the hook. I think this was down to getting some Superglue on the fluorocarbon line when I was trying to mount a biscuit - bad angling.

A miss timed strike or two saw them go down so I popped into the little pond over the road where I very quickly landed number two. But the horse in the field where I'd left my tackle was looking menacing so I returned to my original position to keep it at bay. 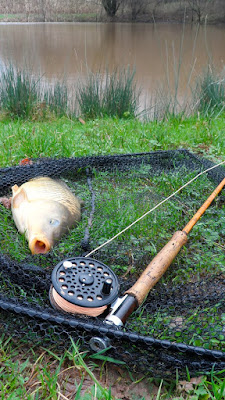 Unconventionally I fished from my chair and continued to feed them until there was a confident feed underway. However, there were several swirls and refusals at my bait, there was something amiss and I needed a rethink. I re-greased my line with a spot of man grease from behind my ear and, after a bit more bag shuffling I came up with a couple of plastic maggots, one hard the other soft. These would not float but I figured I'd offer this 'wet fly' and watch the fly line for bites. I didn't have to wait long. As it sank among the feeding fish the line soon tightened and number three, the largest and maybe three pounds came begrudgingly to the net. 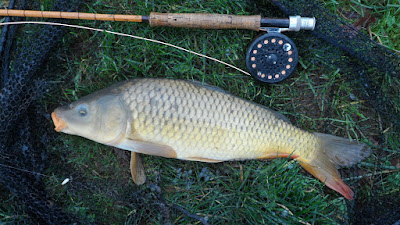 I could have sat it out with a float rod and had more but trying something new and doing it at a time of year when no fish should be willing to chase floating baits was a novel and thoroughly enjoyable way to spend a couple of hours.