It's almost a year since I last posted a blog entry and you may have wondered what I've been up to. Could he be making a film of his life's dreams and accomplishments? Maybe he's been organising the Commonwealth games? Surely, whatever it is that has taken up a full year of Burr's existence must be massive and worthwhile. But no, it's mainly been moaning about getting older, Covid and Boris bloody Johnson. I haven't even had Covid and I am just one year older but my rheumatic pains are genuine and my right thumb has been excruciatingly painful. Who would think that one silly digit could stop you from doing so many things, but, it is the opposable digit that separated us from pretty much all of the animal kingdom so it must be important?

Have I told you about my operation? A sentence guaranteed to see most people looking for a swift way out. Suffice to say, I spent an hour under local anaesthetic, watching a surgeon saw, drill, file and hack at my thumb knuckle as he removed excess bone growth, drilled and screwed the joint thus fusing it and, apparently, finishing any discomfort.

That was two months ago and when he saw me again last week, he took one look at the joint and said "Shit, there's still some movement in the finger". I could have told him that. Hey ho, it would seem that the new bone growth in the void of the knuckle, has failed to appear and, alas, the screw so carefully positioned, has come through the outer edge of the bone, probably as a result of me banging the bloody thing against something solid. Never mind, come and see me again in six to eight weeks and we'll have another look.

Despite the inconvenience of wearing a plastic splint, I have actually managed to fish on three occasions. I visited the Duckpond, as a guest, a couple of times last spring. In two visits I had two bites, both missed. This year my name came to the top of the list and I gained entry to a jolly little gathering of anglers that has existed for quite a long while. When I learned that the list of club rules included one that states, "No larking about", I knew I had found my place.

The first trip involved an early start, ugh, I hate waking up before a sensible hour but needs must. I had a very positive bite on the float and again, missed.

An evening trip passed without the obligatory bite, which struck deep into the confidence banks but, yesterday, as I sorted my gear for this morning's trip, I felt confident that my season would soon start. 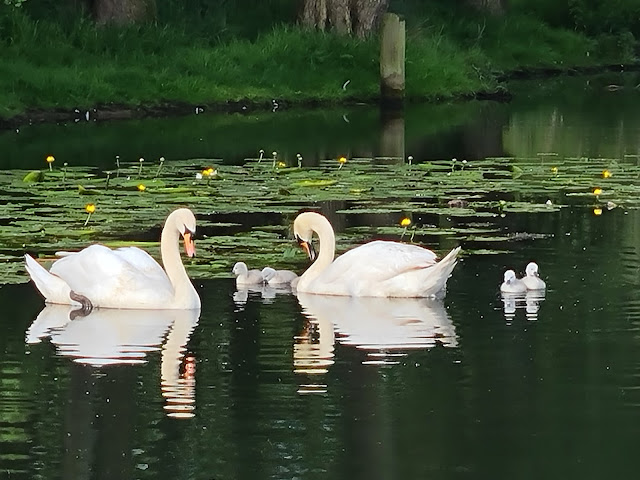 En route to the pool, I saw one adult and a couple of young hares not far from home. I do see the occasional hare but this little family group cheered me no end. Just like the rook that's been visiting our bird feeders, anything a little unusual is always welcome.

Duckpond was calm and still as I arrived. A walk around showed one eruption of tench bubbles in an area I had no intention of fishing but, well you do, don't you.  Out went a pva bag with some hemp and bits of prawn in some dry groundbait mix to prevent wetting the bag. A prawn on a hair (not very Crabtree) and I was fishing.

A second rod with a float and maggots went to the other side of my pitch and I regularly trickled bait on that spot. My baiting was all over the place, having little or no grip, a catapult is not an ideal delivery system but, without a servant available, I struggled on.

The morning was pleasant, the swans looked serene as they paraded their brood until one of the two Canada geese popped its head over the parapet. Swans are horrible things and bully the crap out of everything around them. Over a month ago the geese had nested on the bank but rarely dared venture afloat because the swans were brooding. The goose chicks hatched but disappeared soon after. Otter? Maybe but, I would put money on ol' misery guts Mr Cob seeing to them.

Calm returned and I sat back, contemplating a diary entry. I suddenly felt that feeling and thought to myself, I must be due my bite soon. Moments later my float twitched as a fish brushed the line. I hurried to finish my coffee but the float rose slightly, dipped, rose again and finally slid.... I hit it before it sank. Immediately, I recognised the rapid tail beats of a male tench. I quickly gulped my coffee down, tossed the mug to one side and set about the job at hand.

The fish ran hard and deep but I felt my 3lb hooklink was okay as long as it stayed away from the depths of the lily beds. When it did find a lily, it was already tired and I was able to net it, and a leaf and the game was over. 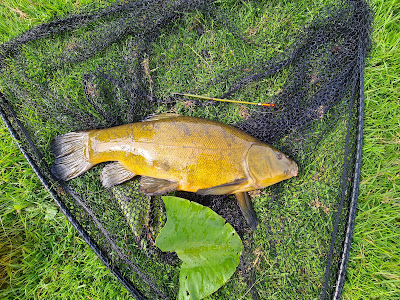 It's a long time since I've had a nice tench but at 4lb 8oz, I know that there are certainly fish three pounds heavier to be caught, maybe a bit more, but they can wait until next time. The swim was devoid of fishy signs and the sun was blazing down. Time to walk around looking for the resident carp, I saw one or two, then home. 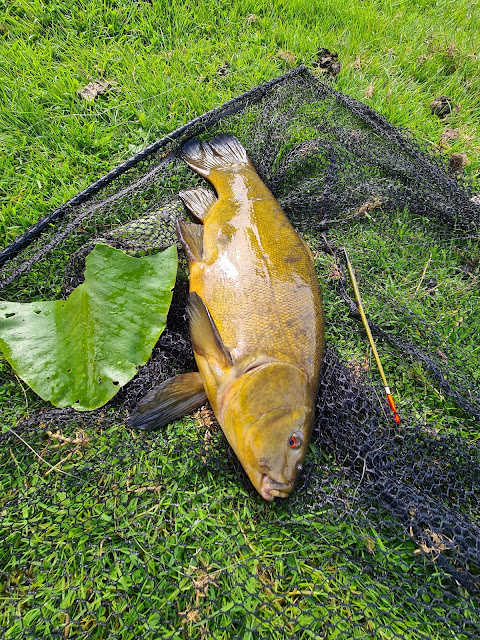