Since my last tale of woe I have fished once - and caught a small eel. Nuff said.

Today is the glorious 16th, a date that has had little meaning in my fishing life for several years due to my concentration on carp and the like. But in this brave new world, I have become a changed man and have resorted to type. No, it won't last.

My targets have all been missed by a country mile so I decided to ignore them. No high hopes, no shit or bust attitude, just fishing. To this end I decided to start the new season on the river Lugg.

Neil and I walked for many miles along its banks yesterday and saw - well, bugger all. The river is permanently coloured a sort of cruddy grey due to a large fruit/veg farm extracting water, washing the mud - and chemicals - off their wares then dumping the discoloured stuff back into the river. This discolouration covers much of the river including all of the good fishing area and spreads down the Wye. It used to be a beautiful water where sight fishing was rewarding but now..... How can this be allowed?

Anyway, apart from a handful of chublets, no secrets were revealed. This did not put me off, a few small chub on the float would be enough to get me off the mark - not that I was setting targets you understand, well, I was but I was aiming low. 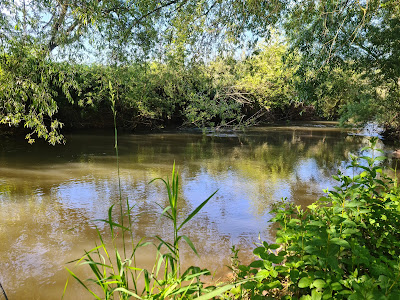 I arrived before 7am and was surprised to see my chosen beat angler free. The route march to find a shady spot was knackering and, as usual, my 'light' approach was still too heavy. But, after beating through a close approximation of the Burmese jungle, I collapsed into my chair on a shallow run that was covered by shady trees. The bird song was incredible, whitethroat, lesser whitethroat, blackcap, blackbird, wren, reed bunting, sedge warbler even a distant peregrine falcon. These, along with a couple I couldn't identify, made me feel right at home and grounded. I put an 11ft float rod together. 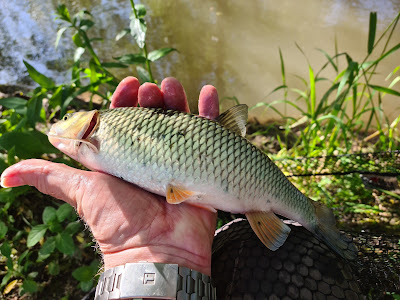 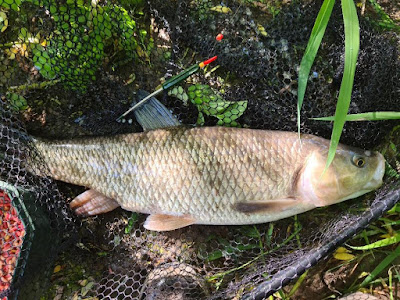 The main flow produced nothing but, when I allowed my float to slowly drag through the inside line, it dipped. I didn't see the fish as it got off but, I was inspired. I changed my float to a more sensitive Avon and soon had a small chub to kick the season off. Next fish was 3lb plus and looked impressive from the small river but, it killed the action. I tried a few more tricks but, apart from a tiddler, I decided to move.

Next swim was hot but the sun was about to go behind a large tree and I duly enjoyed its cover. I went onto a lead but didn't contact with any of the trembling bites. A return to a waggler across the far side and it's waddling gently under some over hanging branches brought a succession of chublets. My early rise, exercise, the heat and my cack-handedness all combined to tell me I'd had enough but it had been a really enjoyable session. I'm certain that in no time I'll be back to chasing lumps.... or will I?