Back on the trot 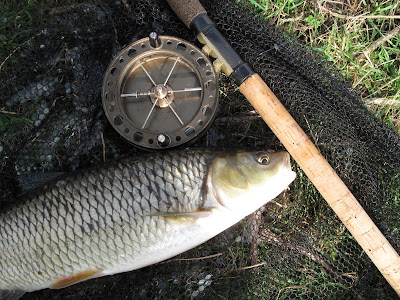 With the weather so unseasonably warm I just had to get out and enjoy the sunshine for a few hours. I bought a couple of pints of maggots and headed for the Lugg, travelling light taking just a trotting rod and the bare essentials of tackle. The rod is a slightly heavier one than I used on the chalk streams as I was fishing in tighter swims and had an outside chance of hooking a barbel. I have two bottom sections for it and opted for the 11' version.
After a long walk I stopped in a favourite chub swim, the current picks up off a bend and runs alongside a steep bank before cutting past an overhanging bush then hits the opposite bank beneath yet more foliage. It is a classic chub spot and has never failed to give me a fish or two.
I trickled maggots in as I tackled up, a 3 x AAA float, 5lb fluoro hooklink and a size 16 Guru QM1 hook - my secret weapon, sharp and devilishly designed to stick into a fish and stay there. They work a treat but, being barbless, they often fall out in the net once the fish is landed.
It took about twenty minutes to get a bite, just as I held back at the tail of the swim, a chub okay, not a monster at only 2 pounds or so but a good scrap in the fast water. Nothing else happened so I moved on to the next swim and the next and so on, seeking out action but, I presume due to the high sun and clear water, nothing came my way apart from a few sucked maggots - probably through the attention of minnows. I did however, meet several mad women walking their dogs, they were all cheerful enough but well, let's say a little eccentric in their ways. Its occasions like this when I like fishing with a partner as it gives me someone to pass them on to but today I had to smile politely whilst being introduced to their pampered pooches.
I ended up where I'd started, feeling tired and with an aching back but I was determined to give it a little longer. I soon had another small chub then something that came in like a dog on a lead to begin with but then woke up and went berserk, it was a brown trout of about two and a half pounds, a bit of a surprise really. The last fish was a slightly better chub of around three and a half pounds, again not a monster but great fun on a light rod and a bit hairy with so many snags nearby.
Happy with my modest haul I left as the sun was thinking about setting and when, I am certain, the better fish would have moved in to feed but I know when I've had enough and there is always tomorrow.
Posted by Dave Burr at 17:41