Something Hidden Something Seen

Been away for a few days, thought it may give the fish a chance to sort themselves out but the messages that I found when I got home were more like the Samaritan's hot line than fishing reports. Bloody typical eh? After a summer of continual rain we get one which is too bloody hot. I'm beginning to sound like a farmer or a motor cyclist, they always describe the weather as 'too' something. Too hot. too cold, too wet, too windy and so it goes on. 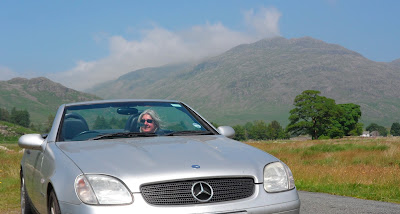 Anyway, the fishing can wait a bit longer, We've been touring and taking in some of the wonderful sights our country can offer. A stay at Buxton followed by a drive around the Lake District and a thrash across country to County Durham just above Darlington for another tour of The Dales and a trip along the coast stopping at Whitby. We really do live in a small country and you can take in much of it in just a few days - unless you own a caravan where our tour would have taken about six weeks.

So, what was hidden? Its this - 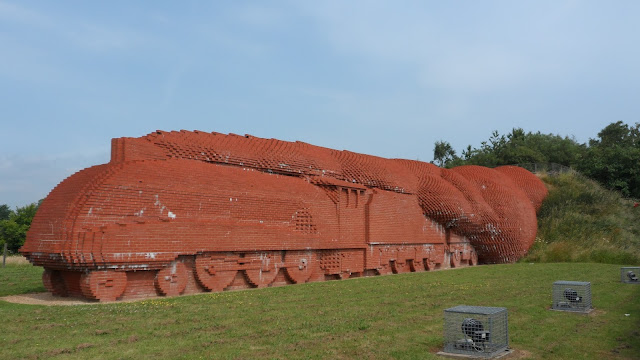 Nestling at the back of an anonymous trading estate, reached by following a series of faded signs, a right, left then another right to the back of a warehouse and half a dozen parking spaces allotted for viewers - we were the only ones. How can this be? When I first saw pictures of this fantastic creation I was in awe, to summon an image of billowing smoke and movement in brickwork is pure genius. This sculpture should be on a high plinth and displayed in Darlington's most prominent position instead it is hidden behind a high hedge preventing viewing from a duel carriageway and industrial buildings. I really do not understand it.

But now to things seen. The world is full of beauty, it is in the sky, the earth and everything in between yet it is often the ugly that grabs our attention. We cannot drive past a car crash without looking and feeling disgusted and distressed at what we see, it just draws the eye with invisible force. As does a very fat person. Oh go on, we're all the same, now I'm not anorexic by a long way but those really fat people that can't walk properly.... you have to look. Likewise those women who wear clothes suited to a size ten despite being twice that - and they've always got tattoos. We went to Whitby where there seems to be some sort of an exchange program whereby you get a new tattoo with every lost tooth - and you just have to stare. The chap walking around with a live barn owl on his hat was the same, he seemed quite grumpy that people stood and stared or took photographs. My answer would be 'well leave the bloody bird at home' but I doubt he'd have wanted to hear that - do you?

Another sight impossible to ignore is a bum crack. There, I've put it out there and I know that you are nodding in agreement. I grew up in a time of short skirts with much thigh and panties on display - oh how I yearn for those days - but we now live in a world where girlies like to wear trousers and despise being ogled at - apparently, but they spend a fortune on making their boobs stick out like a couple of pudding bowls up their jumpers. I never will understand fashion. The other "fashion" I cannot get my head around is the fad that lasted about a fortnight with attractive slim girls of wearing shorts over coloured tights. This has now been adopted and shows no sign of let up, by the short, dumpy girl who really should keep those legs hidden until they can trap somebody too drunk or stupid to mind.

I digress - the bum crack. I think I was put off this display of botty by Benny Hill's impression of Shirley Bassey which has left me traumatised all these years and despite my red-blooded instincts it is not a flash of flesh that shows a girl at her best. The bum crack is just too inviting and I mean inviting for menace and mischief. It is exactly pencil sized which is the classic - should you wish to go that far.

And so it was that on a recent trip to the vet with Harvey (he's fine by the way), that an attractive if homely young veterinary with ample cleavage bent and prodded the mutt as I tried to avert (badly) my eyes. It was as she examined the back half of the dog that she bent to reveal an impressive four to five inches of bum crack. I tried not to look but its just not possible and despite Nicky's tight lipped stare, daring me to behave I could only smile and mime dropping something into the yawning cavern.

As you can see, bum cracks are anti social and trouble making but I have come up with a cure all and recommend you all follow suit. Obtain one of these - 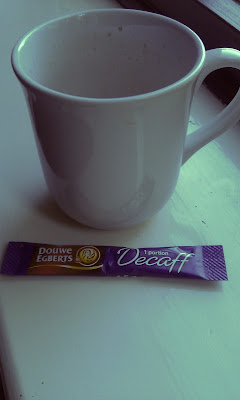 A standard sachet of coffee available at all guest houses or hotels. As you will note it is compact and lightweight and will slip unobtrusively into your pocket for future use. When the offending gorge is presented to you remain calm, slip the sachet from your pocket and rip off the top. Choose your moment well and slip the contents into that gaping valley of darkness then withdraw to a place of safety and observe. The recipient of your deposit will notice the granules but they will quickly begin to melt in the warm and moist surroundings, there will be a moment of unease and as sure as eggs a finger will be sent in exploration. On withdrawal said finger will be covered in.... well, use your imagination. The confused victim will no doubt sniff and maybe even taste the offending .......  all I can say is it is comedy gold just waiting to be unveiled and something to be seen.