There are certain tell signs that indicate my mood and my success on the fishing front. Frequent and buoyant posts indicated a light step as I trip my way from fish to fish and those posts will be littered with pictures to set the mood and display my triumph. Then we look at now, the start of the season, the weather is fine, the river looks great, the lake is in full bloom and there's ne'er a pic or post to be seen.

Where to start? During the first week or so I managed a couple of barbel along with some chub albeit slightly smaller than one would expect from the Wye. I did also discover a talent for an early release technique that saw me lose more than I actually landed. I lost, through line breakage either just above the hook or, on one occasion, above the lead, a total of four barbel in a week, as Neil said "You don't normally lose that many in a season", and I don't. 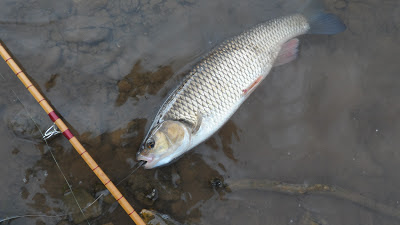 Licking my wounds I retreated to the lake whilst the barbel got down to a belated spawning, it was not the respite I sought. I love the fact that waters are moody and unpredictable, it is a primeval instinct to recognise the signs many of which are impossible to describe, you just know when you look at water that its going to be tough - and it was. Two bream in two nights demonstrates that fact.

I did go stalking and yes, I did find some fish. The point of attack was challenging to say the least, a twelve foot drop to a tiny ledge at water level could only be visited when a fish was hooked, to creep, or in my case to slip, slide and tumble down the precipice before hand would mean no fish coming within a considerable distance. Atop the bank I am on a bridal path, behind me a wooded hill, there is more backdrop and cover than any carp stalker could dream of yet those craft fish know when you are there. I discovered this from my earliest walks around the lake, they just melt away despite the distance and cover from them, plans need to be hatched.

I lobbed a pva bag of freebies and a bit of boilie in the hook into the shallow water, put the rod on a rest  so that the line ran over the sunken branches in the margin and retreated to the cover of a large oak where I hid. Twenty minutes later and the swim was alive with fish. Clouds of silt rose from half a dozen sources and a couple of large mirrors rolled through the melee - I couldn't fail.....

A twitch! was it a liner or a fish dropping the bait? I crept to my rod, squatted next to it in as small a ball as my copious bulk could squeeze in order to look less like a human. I watched the line for movement and the water for telltale signs of the fish. As I stared so the silt gradually cleared, within minutes I was looking at a swim devoid of fish - my moment was gone.

Looking for an antidote to the pressure of trying to catch big fish and failing miserably, I took a ticket on a section of the upper Teme. I was a member there years ago but didn't really bond with the water but this time I have no intention of targeting the sparse population of barbel, I want to try for the chub and especially the grayling. And so it was that I waded through some shallows to fish the bottom of an island and I set about trotting the swirling pool. The depth changes were extreme so fishing accurately was hard but I lost something tiny that dropped off as I brought it through the fast water, then a larger fish that gave a deep, thudding fight but took me around a sunken branch and the hook straightened.

I then went through one of those spells where it all went wrong. I had to change my main line as there was a damaged section about twenty yards down, luckily I had another spool and that was quickly done but in the next swim I somehow managed to get a bunch of loops again about half way through its length. I spent ages sorting it out and thought I'd done so but, of course, there was one small loop left that had pinched the line and it snapped. I swore loudly but having the river to myself it was wasted on the bird life. I trudged back across the river and slipped, cracking my knee on the bedrock. The birds were treated to another outburst.

I went back to swim one and fished a light feeder on my Lucky Strike and a Cardinal fixed spool. The accuracy was effective and in two or three casts I had a plump chub and a grayling of about a pound that was in the peak of condition. I would have photographed it but it needed a disgorger and I'd left that with my gear a short wade away. By the time I'd unhooked it and despite keeping it in the water as much as possible the fish needed tending for a few minutes to revive it. It eventually swam off and I called it a day, limping back to the car.

Other than that its been chub, chub and more average chub. I shall stay later into dark as that's obviously when the fish are coming out to play but, in the mean time and whilst the sun is shining, I'll probably be taking Nicky out instead. 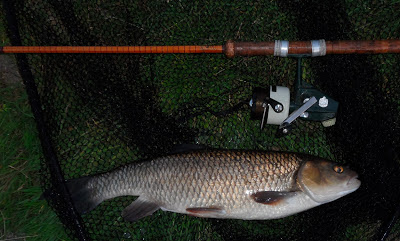