If you ever doubt just how much you know about fishing then take a novice for a day. It is amazing just how many little things you do instinctively that have to be carefully explained and demonstrated - its exhausting.

I've guided people who think they know a bit but were hard work but today I spent with a real learner, my neighbour's lad James. I've taken him a few times before and today I wanted him to get his first carp - not a big one, one step at a time and all that, but a carp anyway. He's a lovely lad who sadly has Aspergers Syndrome which makes for some challenges in his life but he's very intelligent, witty and loves to fish. He's fine with a rod and line but does need to do things in an organised way, once we had that sorted he was away and flying. 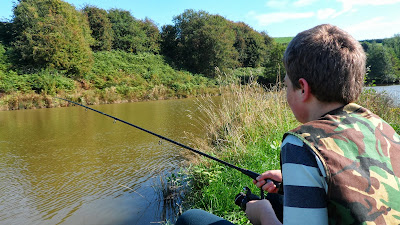 James won't use a live bait so we fed a few pellets, bread and then some luncheon meat that I'd defrosted ............... but which floated! I was hoping to use small meat cubes as our main line of attack but now I was struggling and to make it worse I'd forgotten to bring another tin. Using the ol' noggin I mixed a paste out of a few slices of bread and the meat, the resultant ball of paste quickly accounted for a number of bites and when James eventually connected with one he had his first ever crucian carp. He was happy, I was delighted as I didn't even know there were any in here. It got better when the next bite was struck and hooked with no help from me and a pretty little mirror of about two and a half pounds was landed. 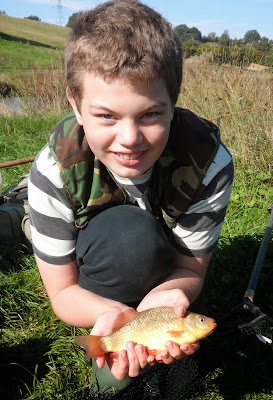 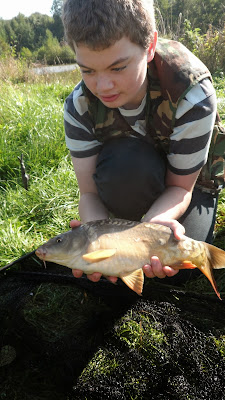 The paste was getting stolen more often than not by the hoards of roach and rudd in the swim, we changed to corn and James had plenty of silver fish and the most beautiful little linear carp. I had a few slightly larger carp up to four pounds or so, by casting a pva bag across to the far bank and one by floating a crust right under the near bank.

In all we had great fun but the close of play was signalled when James had tried to sort a minor tangle at the reel by winding backwards. The result was a bird's nest of prodigious proportion that meant we either start again or go home. Both tired and happy we packed vowing to return.

There are many ways to enjoy fishing and sharing a day with James is certainly one of them. 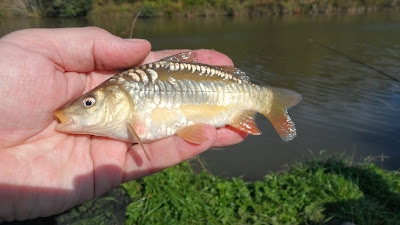